As you may already know, this year Stampin' Up! celebrates their 25th Anniversary! To commemorate and let everyone celebrate this important milestone with them, they will
be releasing many special promotions throughout the year.

They have already begun the celebration by unleashing several promotions:

Running only through January 21, are two Valentine promotions: Valentine Treat Bundle
and My Little Valentine Promotion. 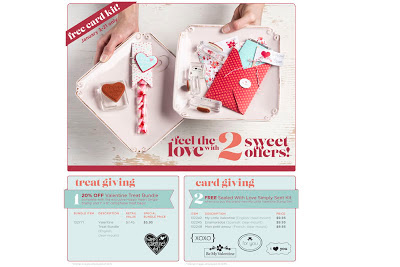 For Promotion 1, Valentine Treat Bundle, you get not only the precious heart stamp (look at
the left side of the flyer under "treat giving") but also a package of the cool 1" x 8" treat bags -- all for $5.95, which is actually a 20% savings off what you would pay if buying them separately!

Remember, both of these promotions run only through January 21.

The clear block size required for each of the stamps is listed in the flyers. 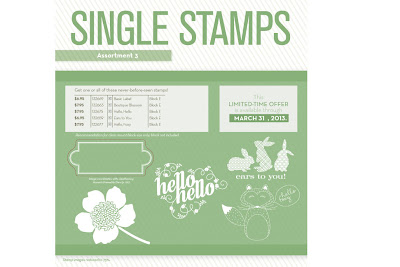 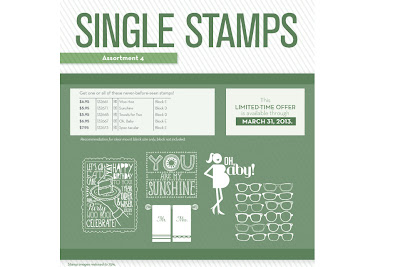 Just keep in mind that these darling single stamps will disappear after March 31! Get them while you can!

Finally, as part of Stampin' Up!'s 25th anniversary celebration, they will bring back some of their favorite stamp images from the past 25 years and combining them into 12 sets. One of these 12 sets will be released each month during 2013. Along with these great classic images, each "Best Of" set will also include a never-before-seen BRAND NEW image.

Here is the set you can get for January: 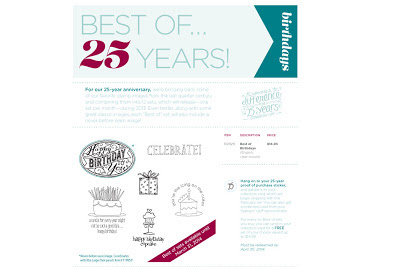 P L U S : As a special incentive to collect the entire series of "Best Of" sets of stamps, starting
in February, Stampin' Up! will include a collector's card and 25-year proof of purchase sticker with every one of the sets. Every time you collect six of these stickers, you can send it in to redeem them for a FREE stamp set of your choice valued up to $14.95. (Free sets must be redeemed no later than April 30, 2014.)

And here is the collector's card that will come with your February "Best Of" set for you to begin collecting your proof of purchase stickers to earn yourself a free stamp set! 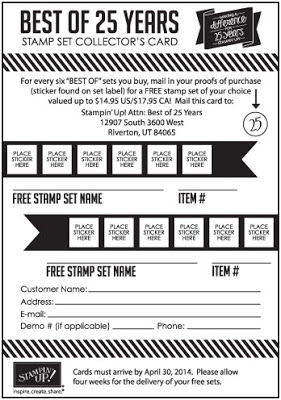 Cool stuff, huh? It's so much fun to celebrate an anniversary! Isn't it??