I was recently commissioned to create a very special wedding card. Amazingly, an image of what the card would look like popped into my head immediately.

Not being scheduled to work today, I decided I would tackle the card, and that's how I spent much of my morning. At times, it seemed like there was a conspiracy against me finishing the card. Everything went wrong that could go wrong. You heard of Murphy's Law of Cardmaking? Well, it was at work today.

But, after many trials and errors, I was happy with the end result: 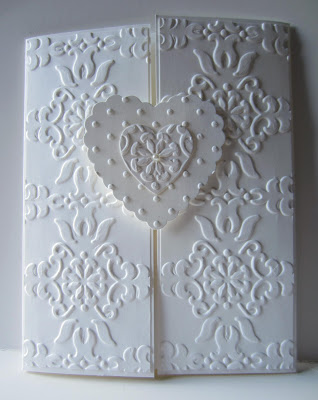 It was nearly impossible to get this shot of the card in the closed position. It kept popping open. So I used some temporary adhesive to hold it closed. I tried to limit the amount of adhesive I was using, so it wasn't a perfect closure.

The original concept I had in mind for the card was, first of all, white on white. And I wanted it to be loaded with texture. But, most importantly, I wanted to use the classic wedding concept of "two hearts become one". I accomplished this by: 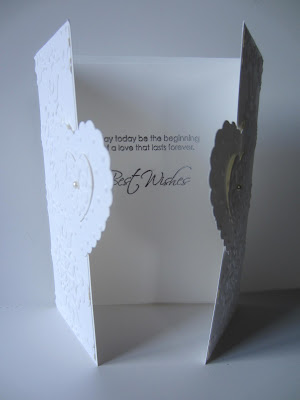 . . . placing two identical hearts on each side of the gatefold. When the card is completely closed, the hearts line up perfectly and appear to be only one heart. 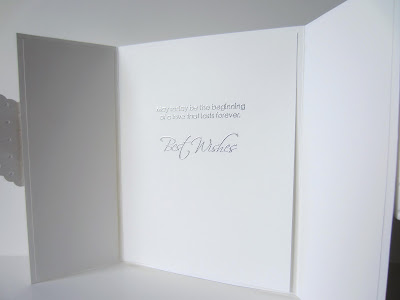 Of course, even though I was very careful about the temporary adhesive I used to keep the card closed for a photo, I ended up with an undesirable side effect. Some of the texture of the embossing on the reverse side showed on the pure white of the inside of both gatefolds. Grrr.

I ended up "lining" both the gatefolds with another layer of paper adhered in place over the indentations. Which is fine. It simply adds to the elegance. 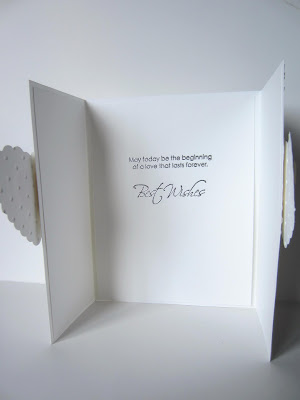 Even though I contemplated leaving the inside of the card blank so the giver could write her own personal message, I decided against that. I found two beautiful stamps that were perfect. But . . . I wanted to stick with white on white. Remember? I knew white embossing on white would not show up well enough. What to do. I ended up creating the sentiment in silver embossing. Elegant, yes? 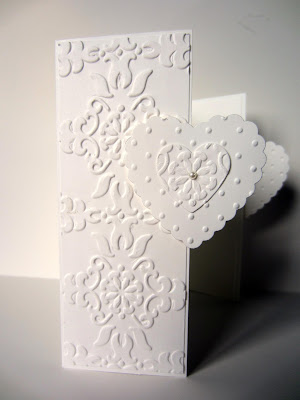 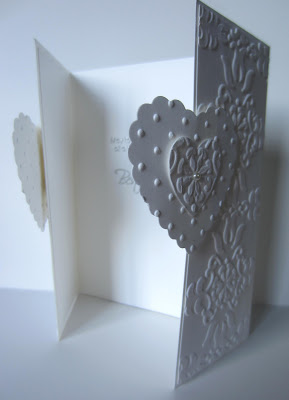 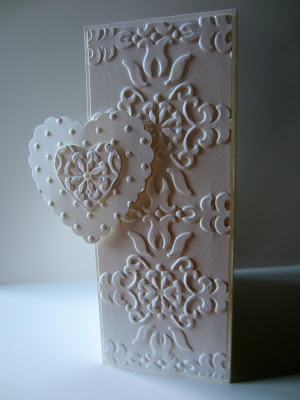