Hey, thanks to all of you who emailed me with guesses as to how my eight backgrounds from this post were created. I got a variety of guesses. Some of you were so close . . .

Here is the big reveal. It is a variation on the Faux Silk technique that I wrote about here. I had been cleaning -- loosely speaking -- in my crafting room, and came across an enormous box of packages of beautiful napkins I had been collecting for some time. I had completely forgotten about these lovelies, and when they reappeared, I felt -- you guessed it -- guilty. Since my initial interest in gorgeous napkins came from a newly-found technique utilizing them along with beeswax, and this interest has gone by the wayside, I needed to find another use for at least SOME of the napkins.

To do the Faux Silk technique, you use crumpled tissue paper meant for gift wrapping. I thought, well, napkins are basically tissue paper, right? Because most decorative napkins are two- or three-ply, meaning the napkin is made up of two or three layers, they would be too thick to produce those lovely myriad hills and valleys that give Faux Silk such appeal. So . . . I carefully peeled the first -- decorated -- layer from the rest of the napkin. If you start to pick at one corner, it is easy to grab that first layer and gently peel it off.

Once I had that thin layer, it was simple to finish the Faux Silk variation: I crumpled the napkin in my hands, unfolded it, crumpled, unfolded, crumpled, unfolded. The last unfolding should not make the napkin flat, just release the crinkles somewhat. If you flatten it completely, you will not get any texture.

I then used Stampin' Up!'s Anywhere Glue Stick to completely cover the surface of a piece of white cardstock. I gently placed the napkin, which had been cut to size just a bit larger than the cardstock, over the glued paper, and gently pressed downwards, pressing in those wondrous crinkles and wrinkles to give it its divine textured interest.

When the background is dried -- this only takes seconds -- use a pair of scissors to trim off the excess edges. Or you could use your favorite paper cutter. In fact, the piece I actually used on my card was cut a bit smaller than originally with the paper cutter so I could put a colored mat under it, then onto the card front.

With all that said, I present to you the card I made from one of the original eight I'd showed you in my Solve This Mystery post: 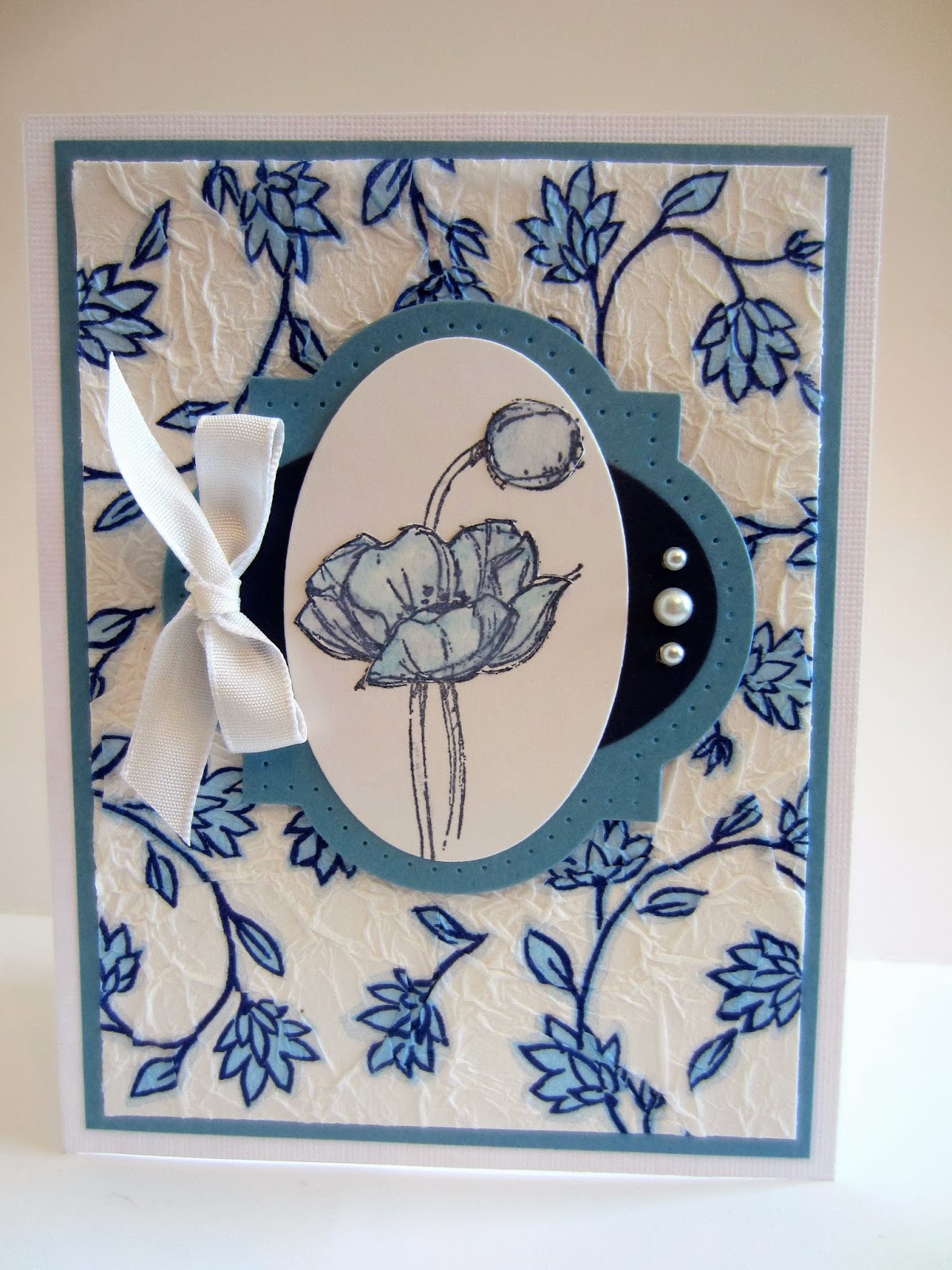 While the dark-colored oval underneath the flower oval looks almost black, it is actually Night of Navy to pick up the darker outlines on the background flowers. In real life, the color is much closer. 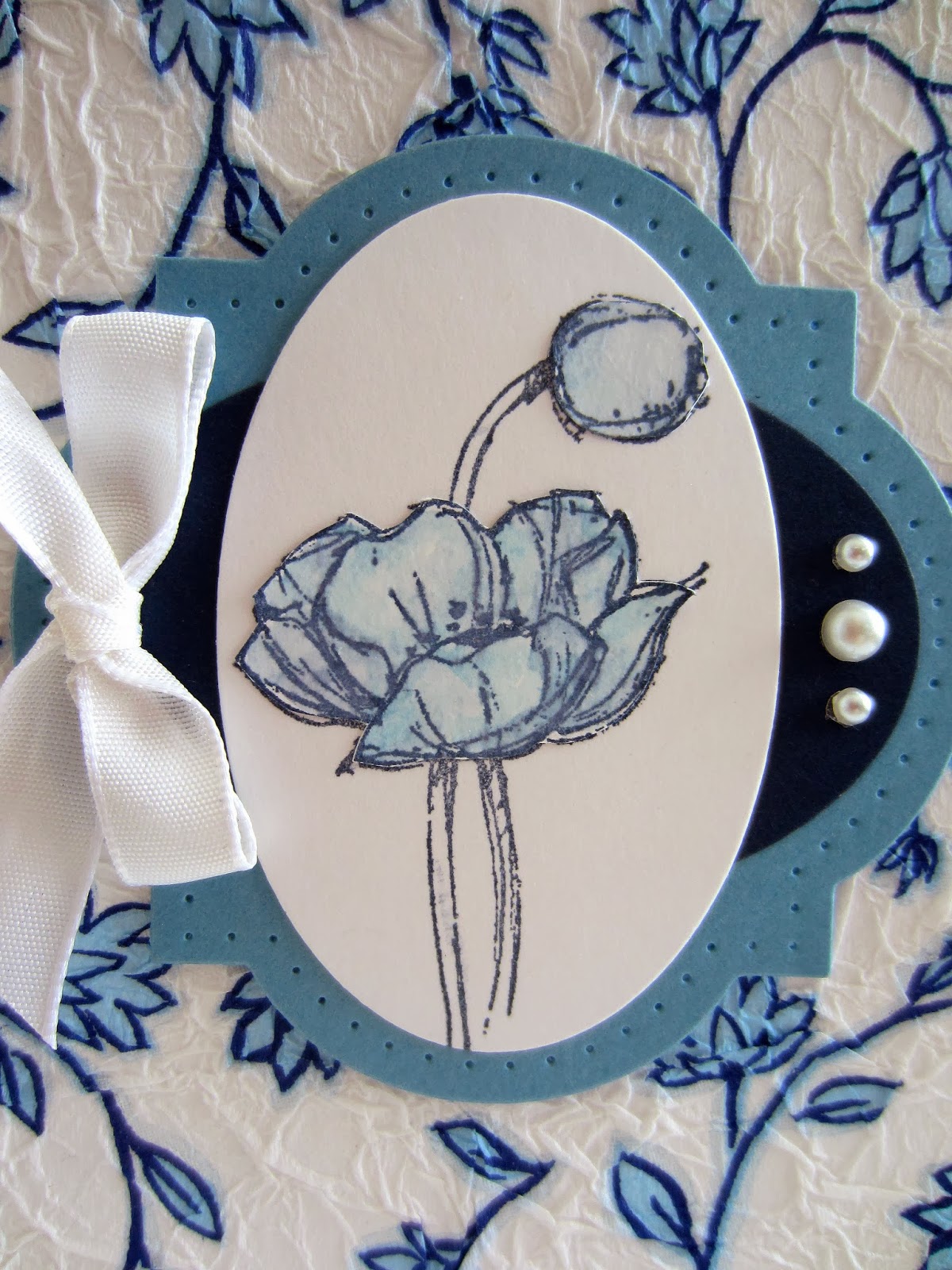 I also stamped the poppy image onto Whisper White cardstock in Night of Navy twice. Using an Aqua Painter and Marina Mist ink, I "painted" the flower and bud on one of the stamped pieces. I then cut them out and adhered them over their counterparts on the other stamped piece.

I am happy with how the card turned out, and am anxious to give the other backgrounds a try.

N O W, I would like to announce the winner of the Solve This Mystery contest. Congrats to Debbie Adelt! And Debbie chose the turquoise and brown background for me to create her prize. Debbie, please email your snail mail address to me at lidna52@gmail.com, and I will get to work creating your card to send to you, along with a few extra surprises.

So, the next time you attend a special function at which they have cool napkins, don't be just TOO messy and stick your <used> napkin in your purse, and head home to give this technique a try. It is so easy and gives such pretty and varied results.