And so continues my November 2014 Paper Pumpkin kit journey. I am trying to put my own spin on the kit. The various components are splendidly delightful, and just beg to be played with.

This time I wanted to make an ornament.

Do you see the snowflake card in the foreground? The kit came with white snowflakes split in half so they could be placed under the built-in blue snowflake on the card base. While I do love the look of the card created as instructed, as soon as I saw those half snowflakes, I immediately thought of a dimensional ornament. 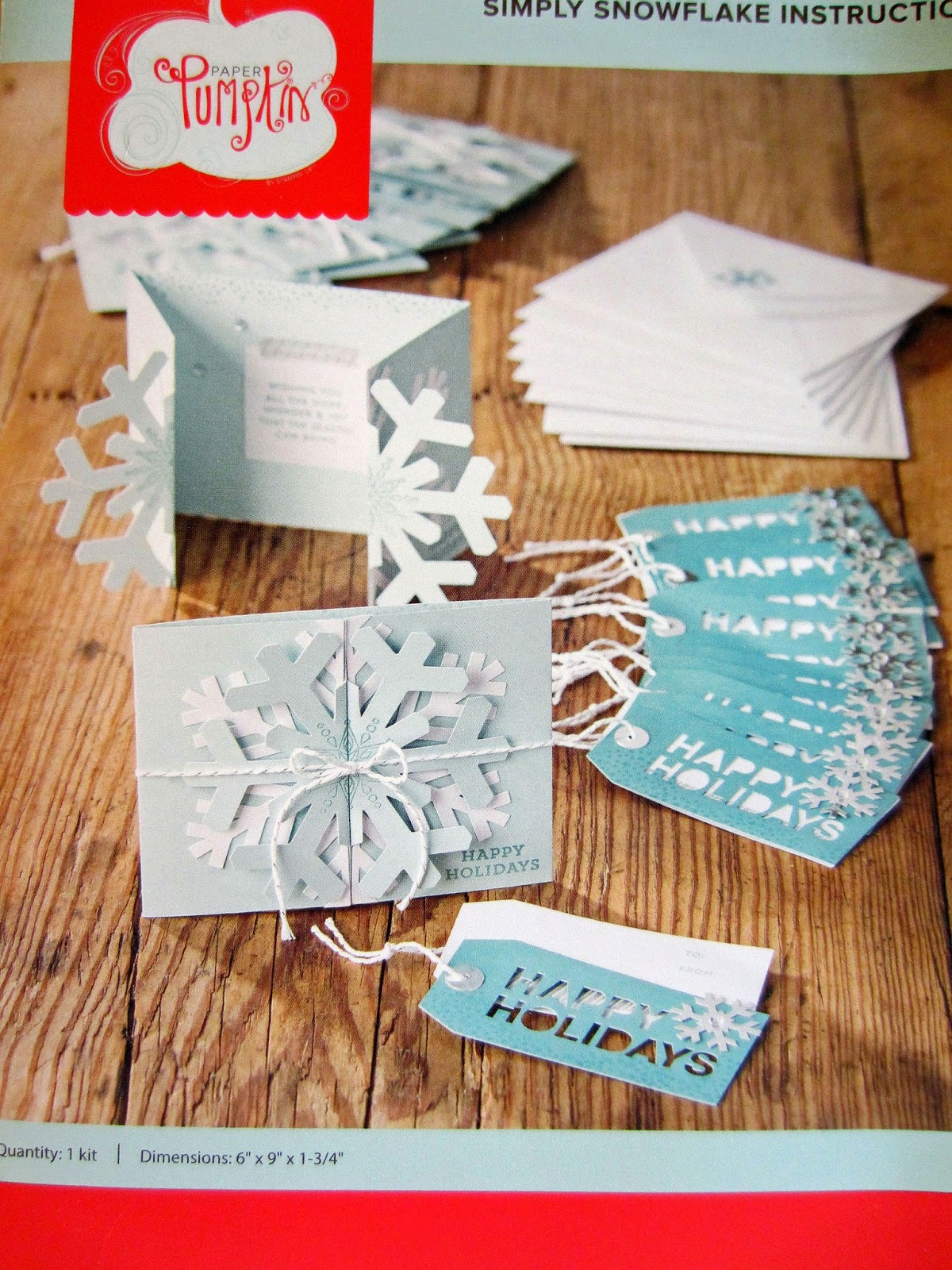 To make my large 3-D ornament, all I had to add to the kit contents were the dotted DSP in Island Indigo and the Circles Framelits set in the Big Shot to create the backgrounds for the snowflakes. Otherwise, everything else came in the kit!

I very carefully adhered one half of a snowflake along the center of the scalloped circle and followed with the other half set against the first. I folded each circle in half along those splits in the snowflakes. 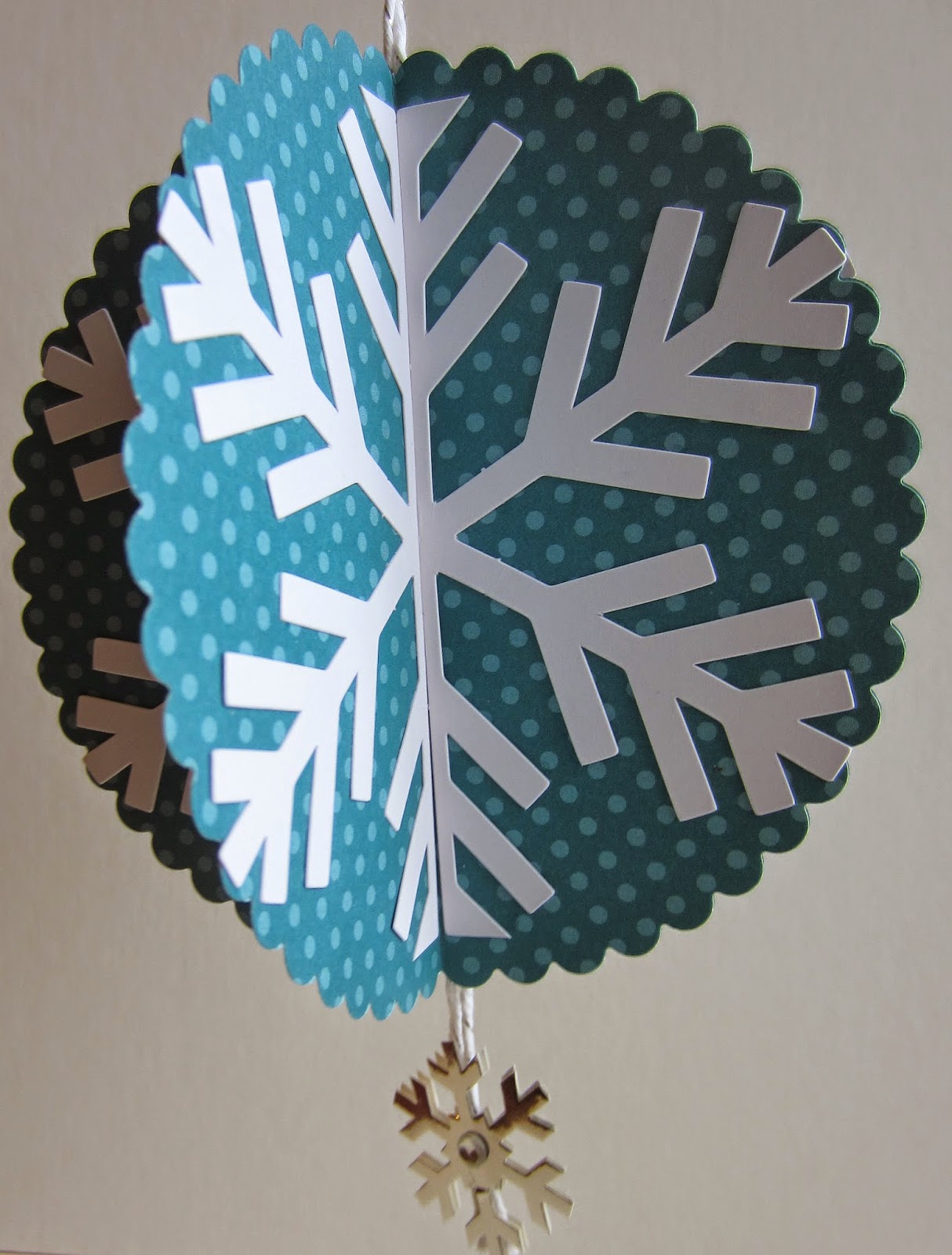 To make the dangling snowflake at the bottom of the ornament, I used two of the silver pre-punched snowflakes back-to-back with the Baker's Twine sandwiched between them. I added one of the included rhinestones to the center of each side of the silver snowflake. 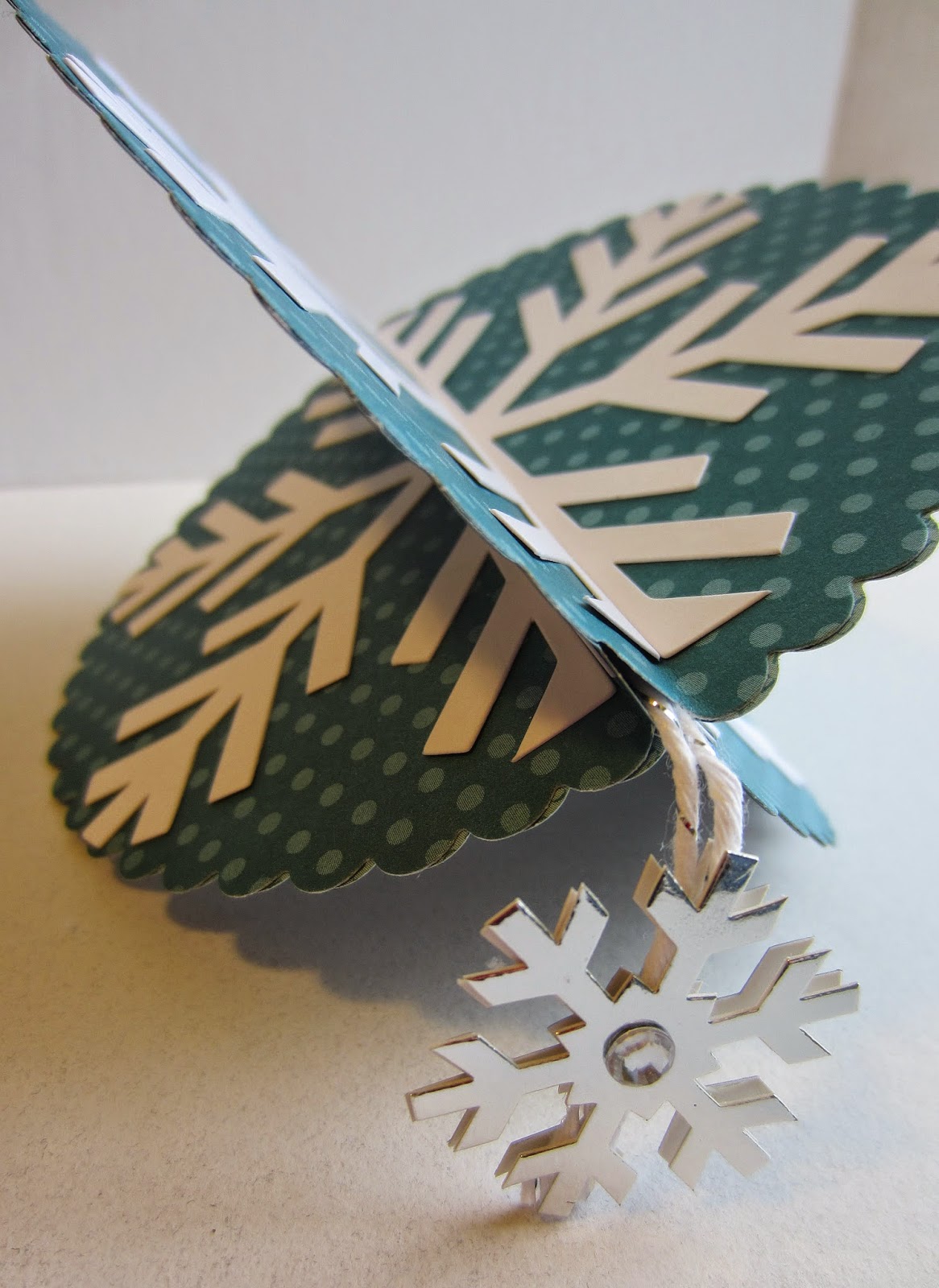 Four circles with snowflakes folded in half and glued together make up this ornament. Before gluing the final sides of the circles together, I added the Baker's Twine folded in half so the loop stuck out the top for the hanger, and the ends met at the bottom to be sandwiched between the silver snowflakes. 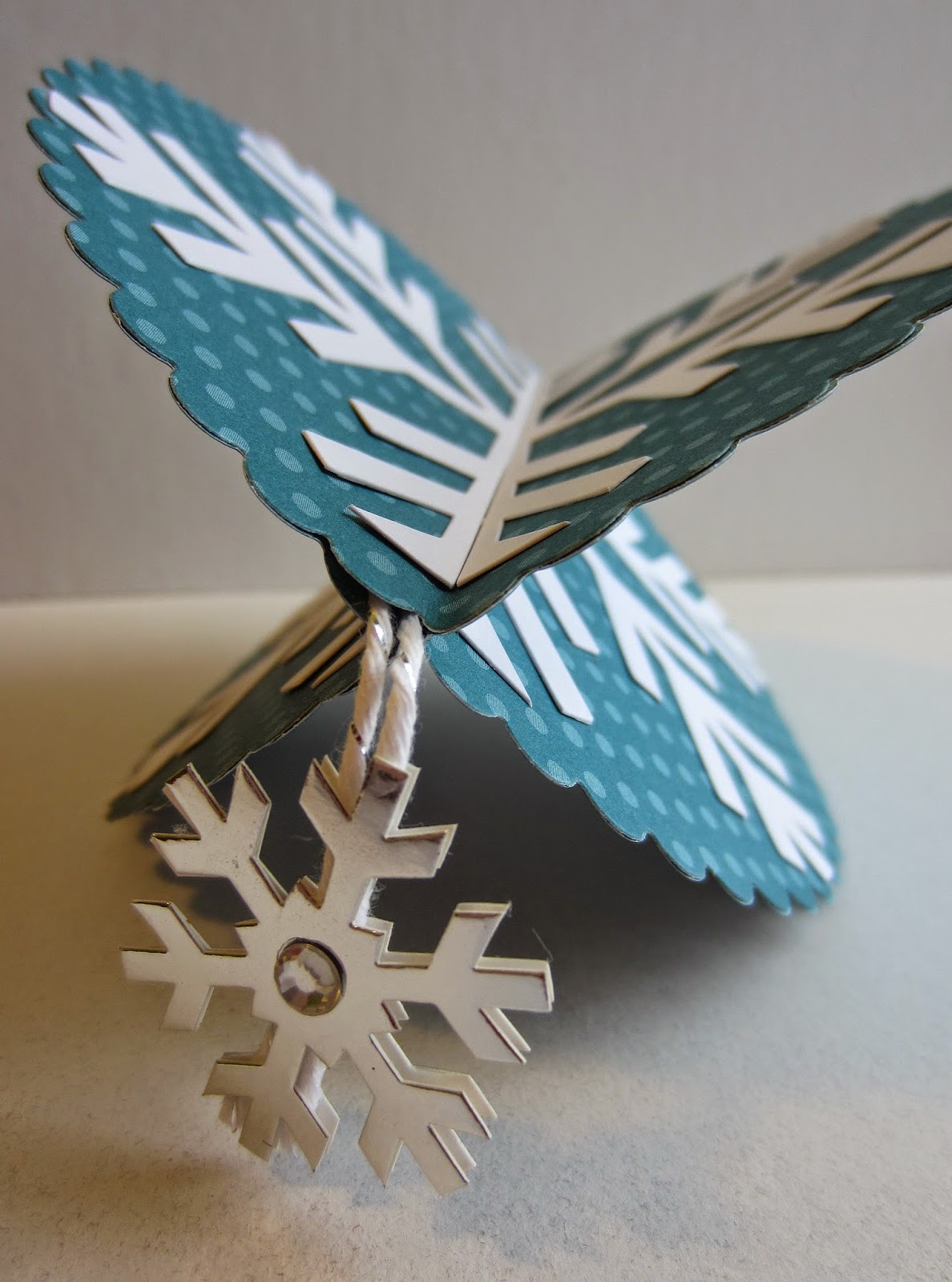 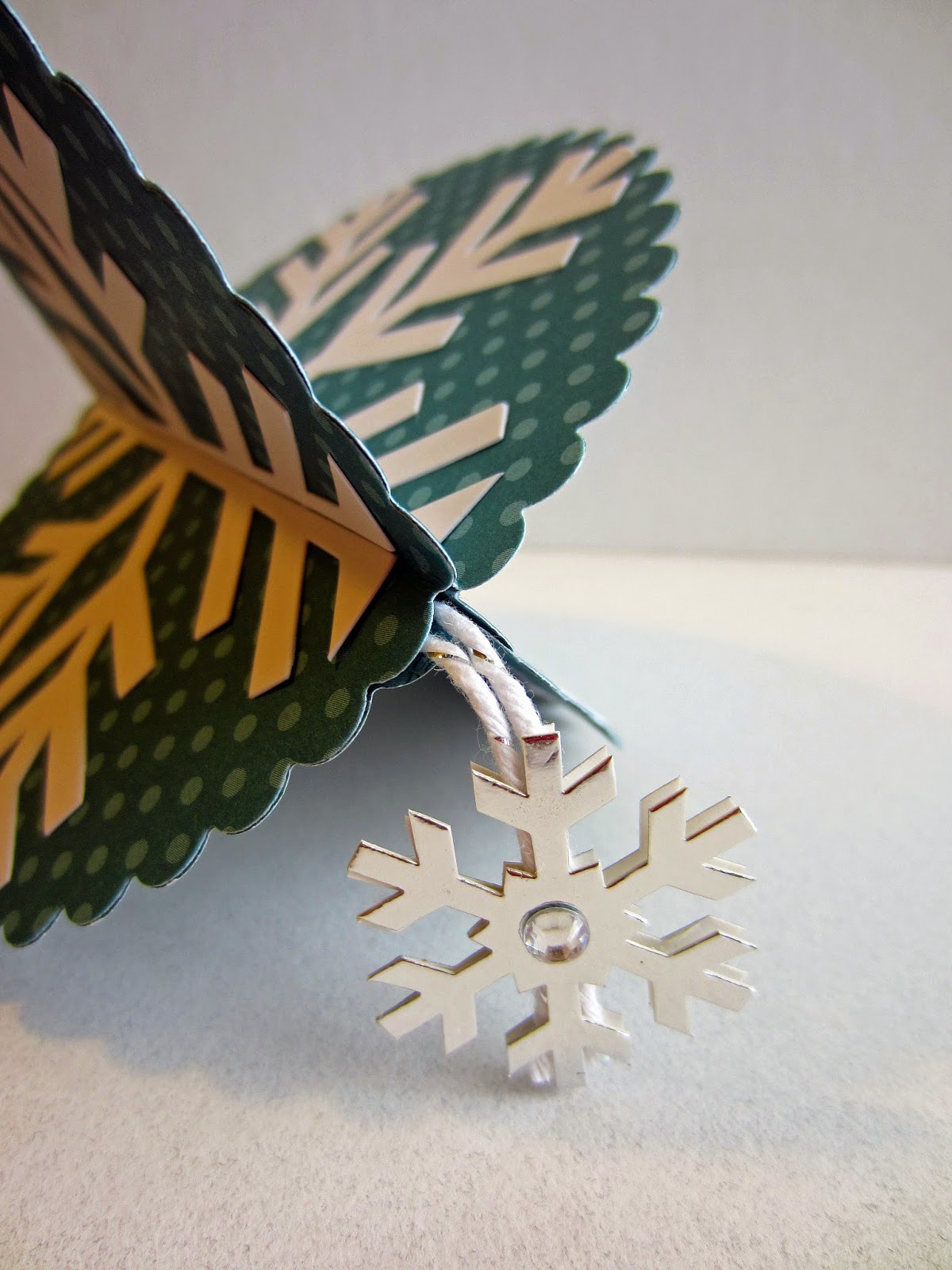 If you are a Paper Pumpkin subscriber (WHAT?? You're NOT!?! Get right on over to mypaperpumpkin.com and get your little self signed up!), have you worked with this kit yet? Are you following the instructions to the letter? Are you deviating a little bit? How so? Are you completely reworking the kit like I am?

One of the many things I like so much about these Paper Pumpkin kits is being handed a wonderful package of beautiful unique components to do with as I like. Monthly fun in a cute red box!