While this card was fairly simple to create, photographing it, on the other hand, was excruciating and very frustrating.

The background, being a reflective surface, was a real challenge to capture on "film" without catching too much of a reflection of me, my camera, bouncing sunlight, etc. I ended up taking a total of 65 pictures! Time after time I'd go back to try again after viewing them on my computer screen. I endured and ended up with a handful that I think depicts the card tolerably well. 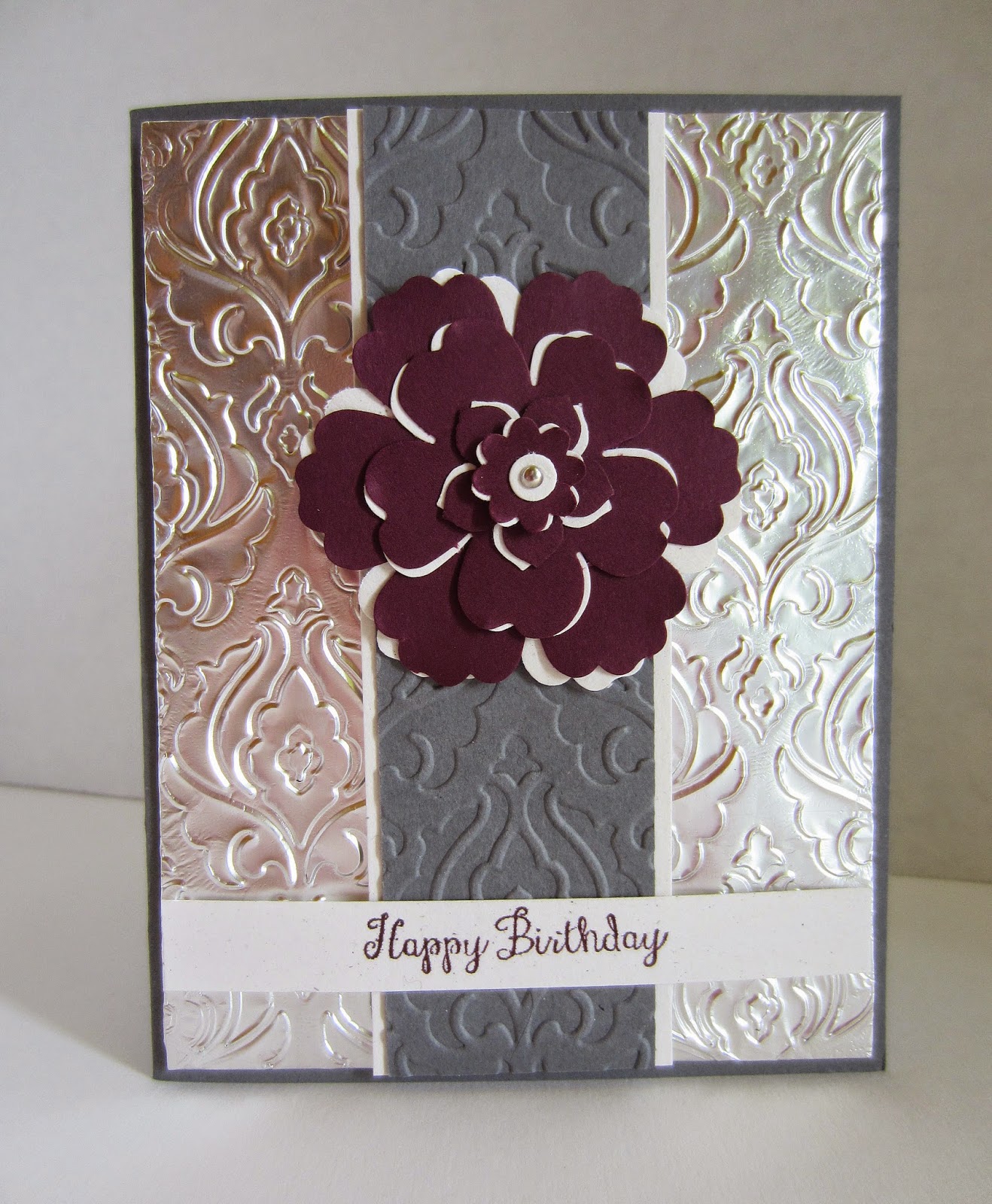 Another of the problems I continued to experience was that the flower, made from Blackberry Bliss cardstock, a normally densely dark color, kept showing up too dark, almost black. The following photo shows the color a bit better, although it makes it look a tad too much like Rich Razzleberry because of its lightness. 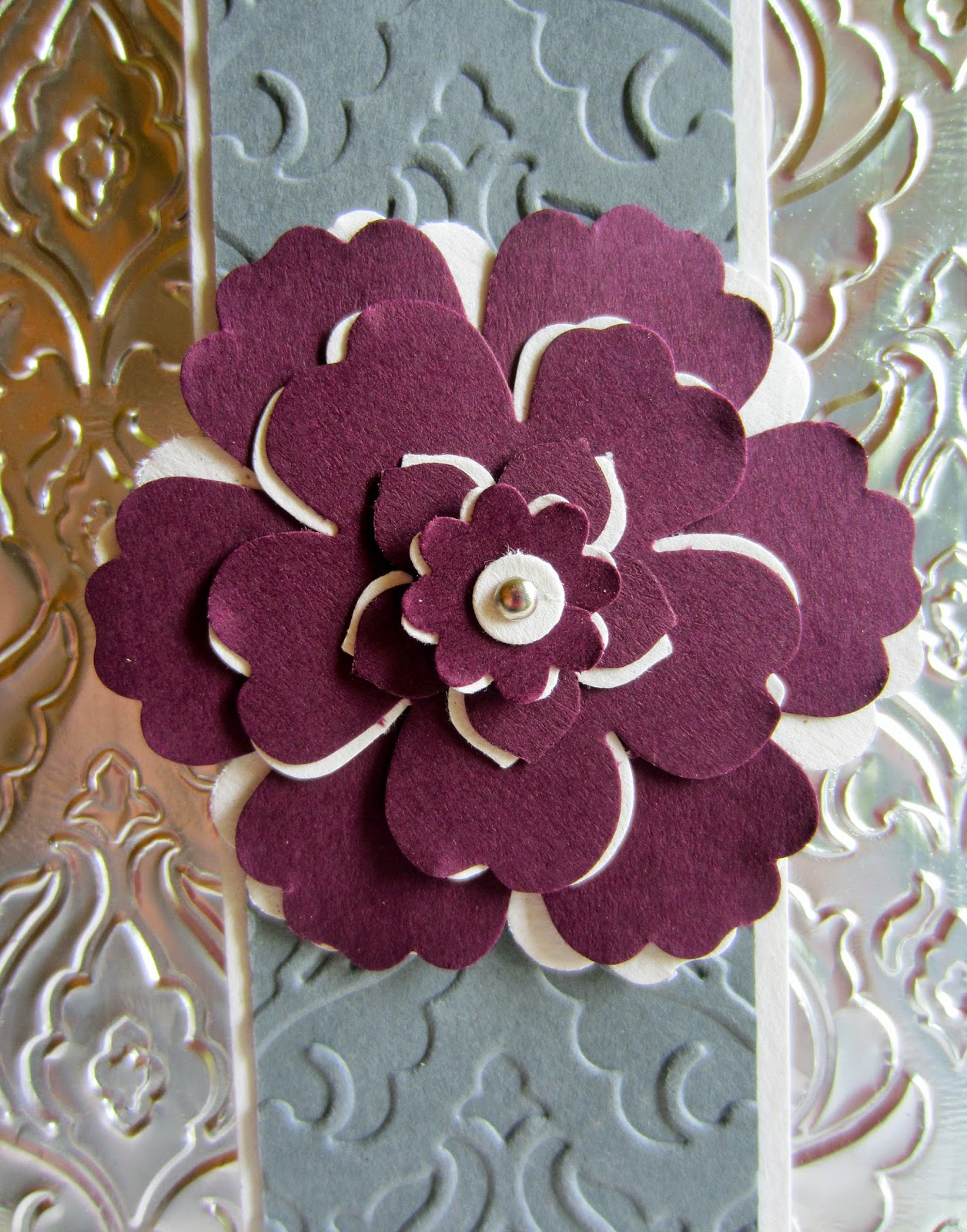 What I was trying to accomplish in creating the background of the card was to replicate the classic look of pressed tin. 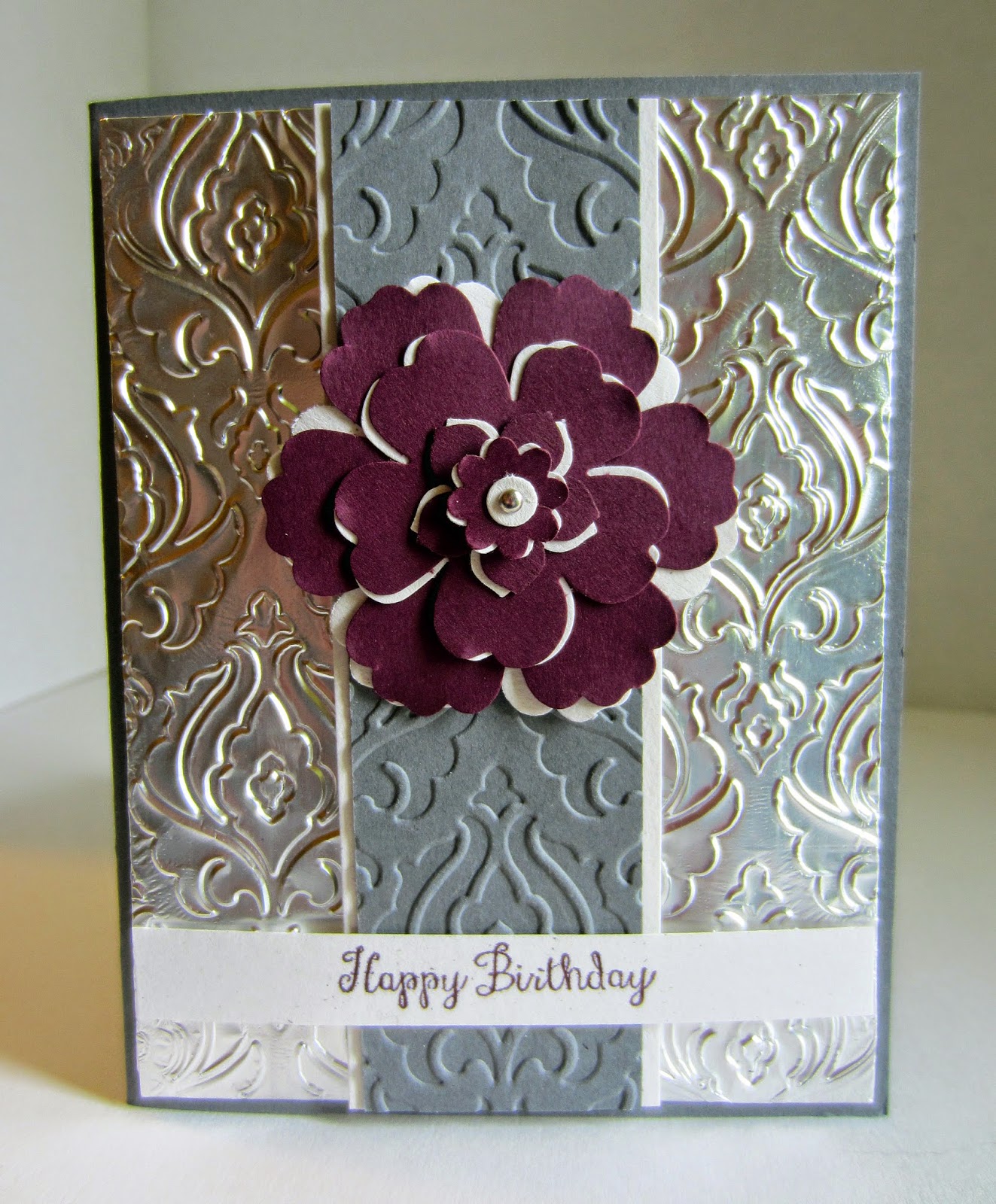 After looking at a few of the photographs, can you wager a guess as to what nontraditional material I used to get this effect? 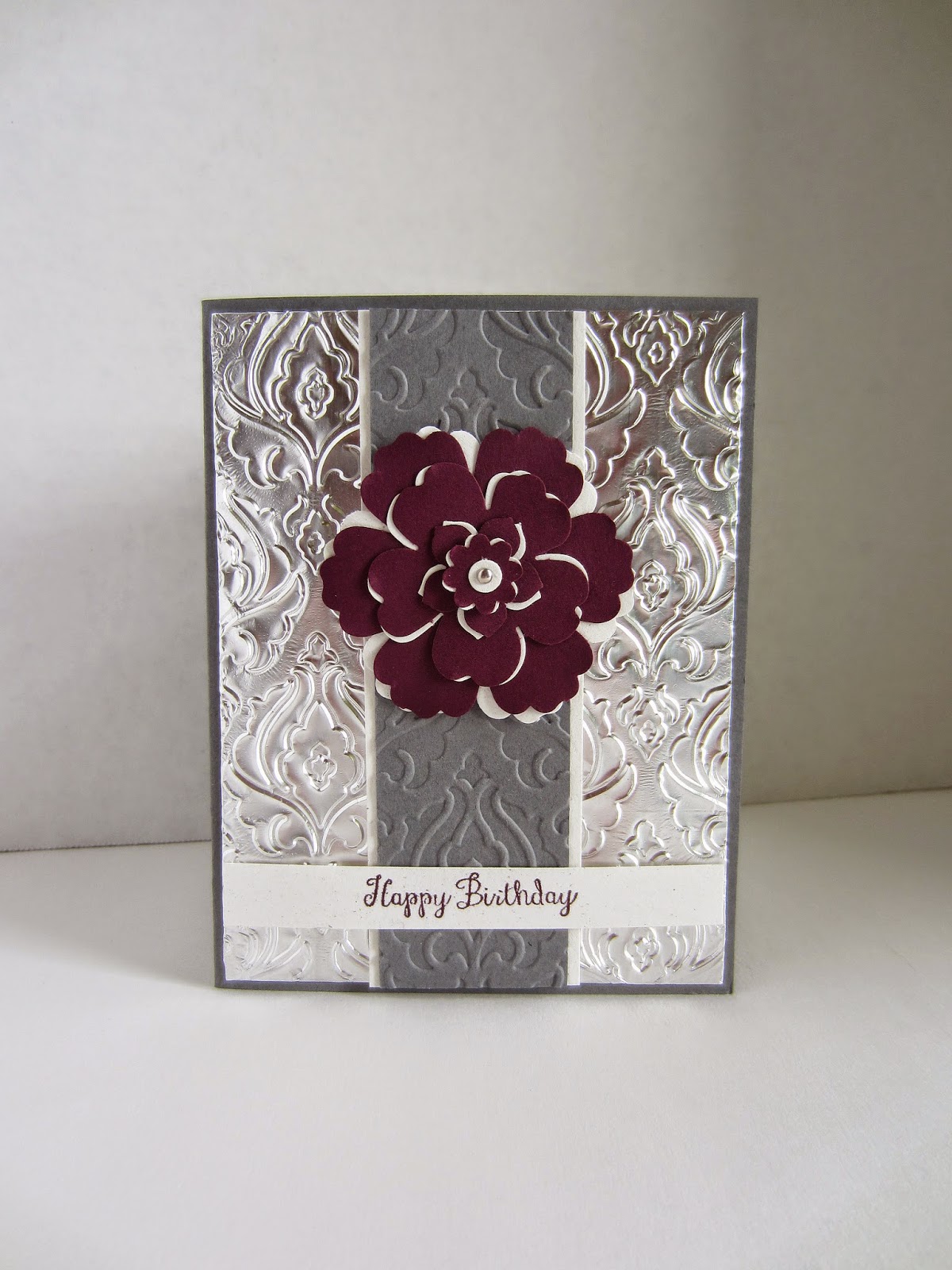 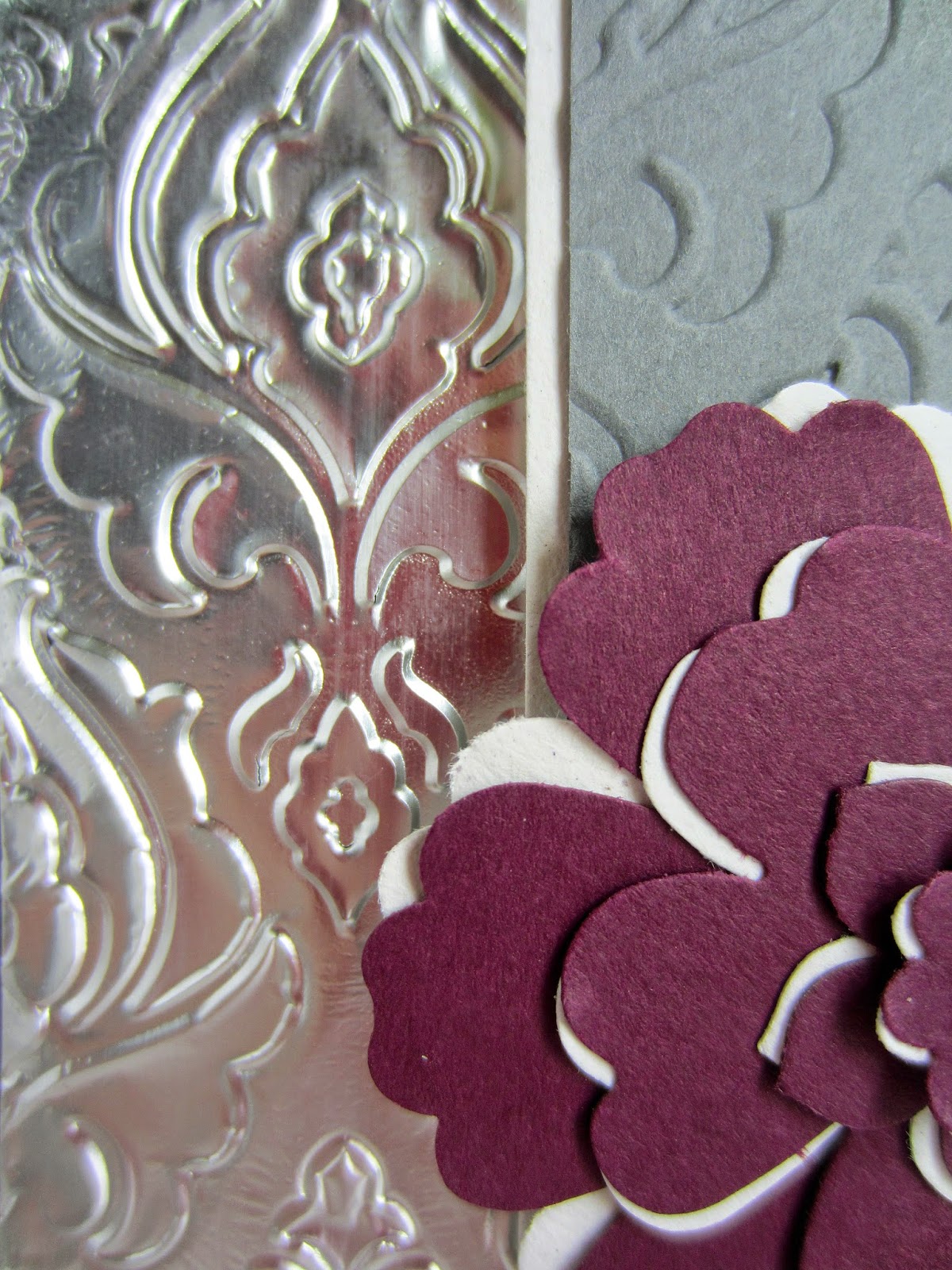 I actually inserted a piece of aluminum (tin) foil inside the Beautifully Baroque embossing folder, which is, unfortunately, RETIRING!

After embossing the foil, I gently turned the excess over the edges of the 4" x 5 1/4" piece of scrap cardstock I was using as my base. To secure it on the reverse of the base, I simply scotch taped it in place. 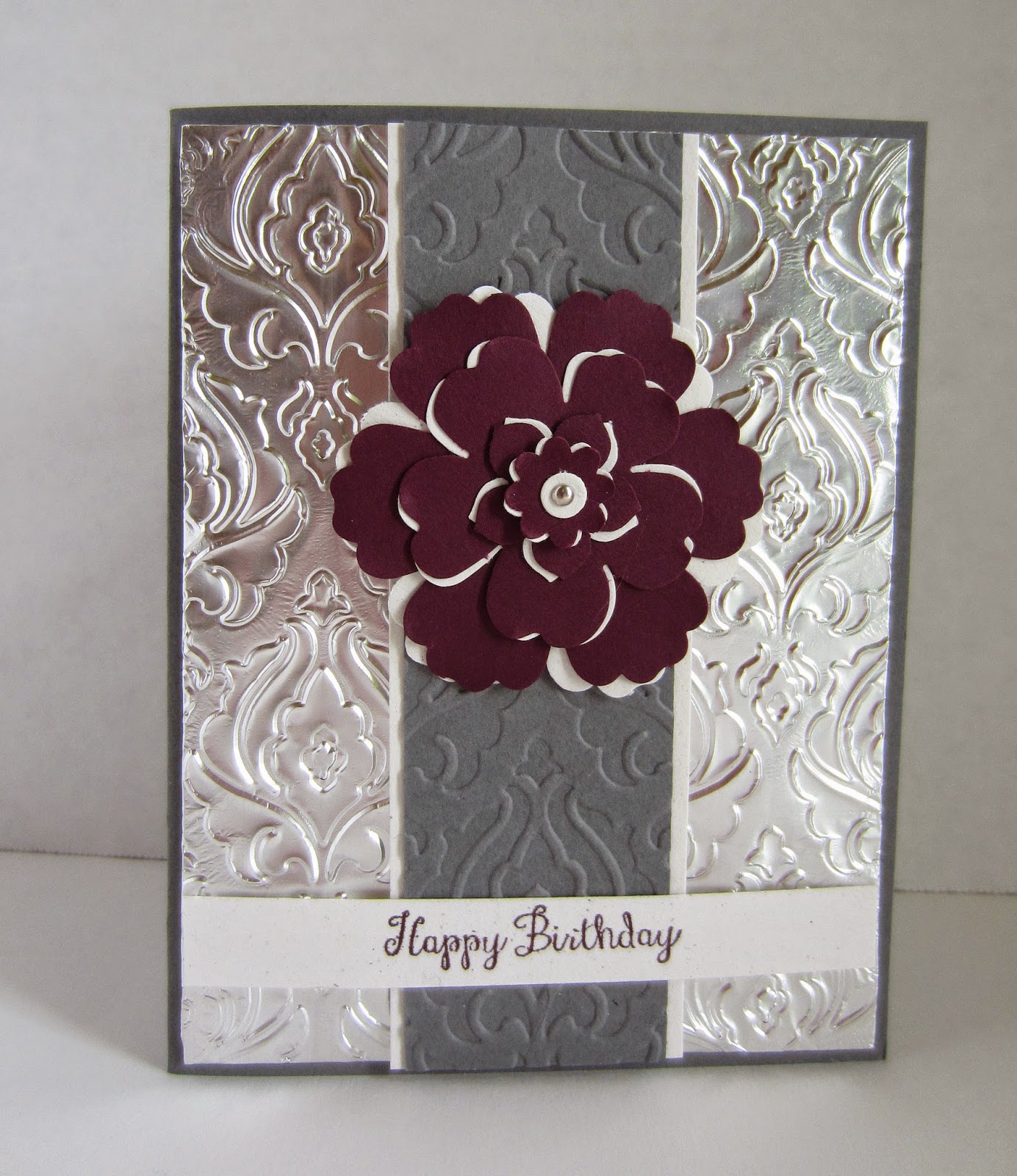 As you know, texture in foil is fairly delicate and easily ruined by pressure. To hopefully alleviate this problem, I opted to make my flower quite three dimensional so the flower would take the majority of the pressure, especially if mailing the card. I'm not sure if this is a feasible solution as the card is still sitting on my desk and not making its way through the US Mail. But, in theory, it sounds good.

The flower, which I had originally planned to make completely from Blackberry Bliss and using several various punches, turned out to be very BLAH in just that color. No PUNCH whatsoever. Pardon the pun.

So, I punched duplicates of all the layers out of Naturals White (on the RETIRING LIST! AARGH!) and staggered the petals a little from the Blackberry Bliss layers, thus giving it more sparkle and pizzazz. Also, I think it looks sort of pinwheel-y.

The largest layer of this flower is created with the Blossom Punch, which is also on the RETIRING LIST. I am so sad about these three retiring products: the Beautifully Baroque embossing folder, both Naturals White and Naturals Ivory cardstock, and the Blossom Punch. I made this card about two weeks ago, so was not aware of their imminent retirement. 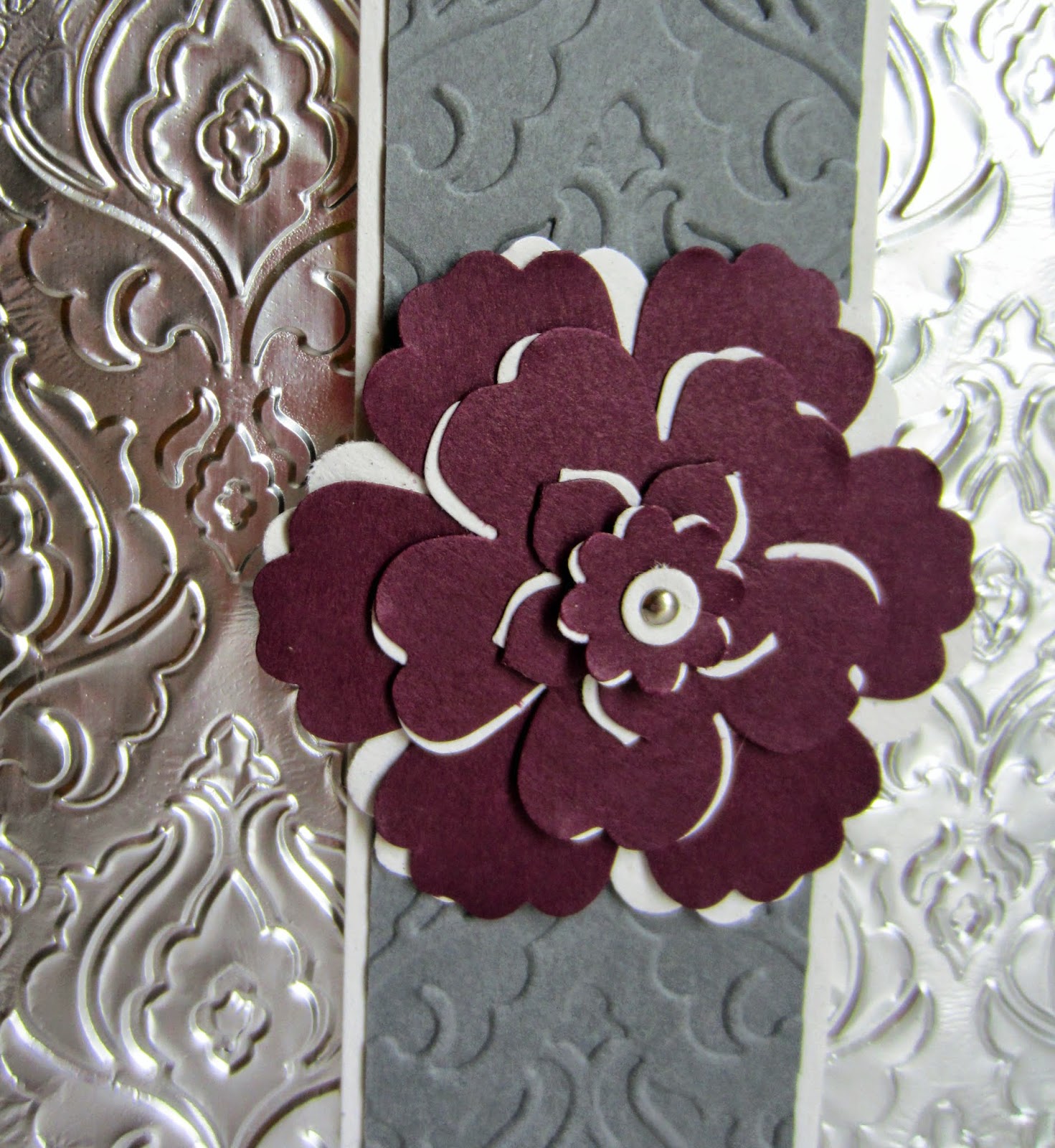 One final look at the finished product.
It definitely does give a classic, traditional, and very formal feel to a card creation. 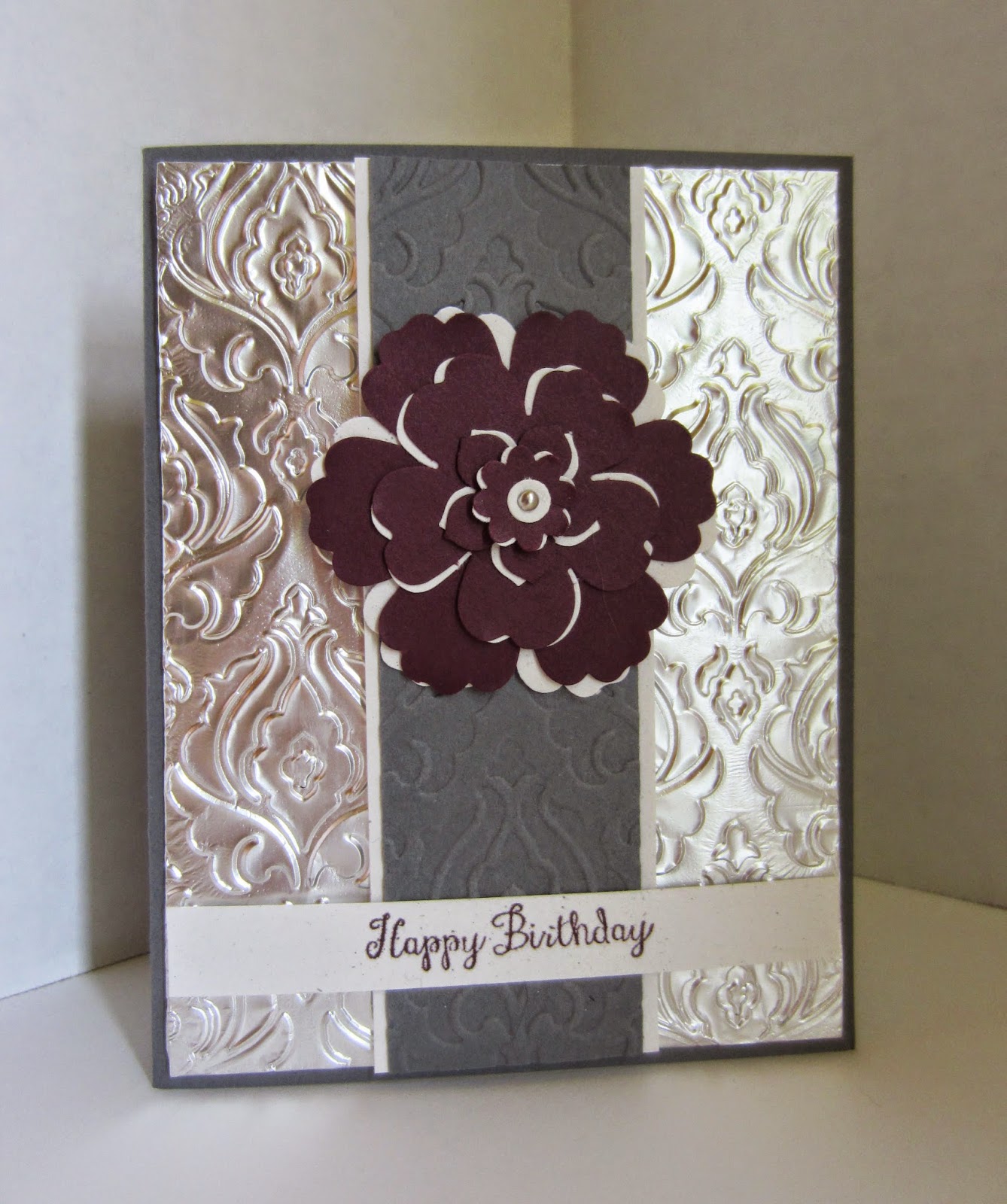 Why not give this cool technique a try yourself?