This is a card that came together in itsy bitsy bits and pieces and lots of blood, sweat and tears. No, not really. But it sure seemed like it.

I had such a good idea for a patriotic card, only to have it fall apart time after time. After time.

What I had planned to nourish the tiny Paper Seedlings in my brain was to use my Stars Framelits to make a stencil, disposing of the stars themselves.

I started with a piece of scrap cardstock that measured 4" x 5 1/4" and placed three of the star Framelits randomly on top of that piece. Running it through my Big Shot and removing the resulting stars left me with a perfect stencil to work with.

I then took a similar sized piece of Whisper White cardstock and ran that through the Big Shot inside the Lucky Stars embossing folder. Laying my stencil on top of my star-studded piece, I sponged in red through the star stencils.

THEN I grabbed a few of the stamps from past Paper Pumpkin kits and spangled those stars in blue. Well, at that point was when I was first frustrated.

Of course, knowing color theory, I should have realized that stamping the spangles in blue over the red ink would give me, if not an actual violet (according to the color wheel), at least, an unfriendly dark blue.

At this point, I thought it was so ugly that I set it aside for several days. I was ready to just write it off as an experiment gone bad. 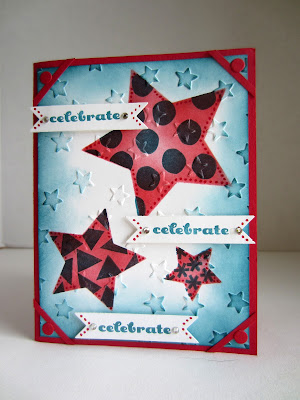 I glanced at it a few days later and wondered if I could possibly salvage it. I mean, the sponging and the stencils looked pretty cool. I just did not like the "spangles".

OK. Let's try a little blue sponging along the edges and into the card, leaving only a little of the pure white in the center. I did like the way it made the embossed stars POP! That helped. a. little. But not enough. Hmmm. What now?

The next thing I tried was adding dots with a Stampin' Write Marker around the perimeters of the stars. STILL not great. 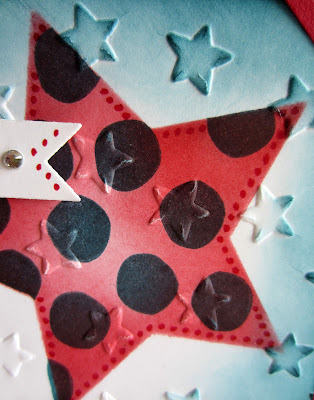 So I set it aside again. I tried holding a few different things up to what I had so far. But it just DID NOT WORK. 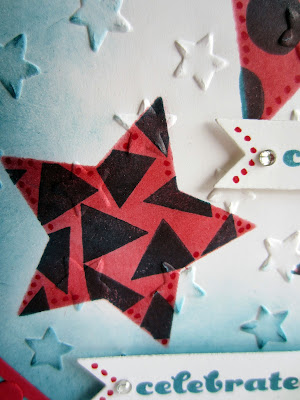 I dug through all my leftovers from other past Paper Pumpkin kits.

Well, do you remember the cute patriotic pinwheels of a year ago? I hadn't made up all the pinwheels, so had some of the little banners left. I grabbed the matching "celebrate" stamp from the kit and stamped three of those banners.

They were just too stark. No personality.

So I decided that to echo the dots I made on the stars, why not add them to the banners? And . . . how 'bout a little BLING?

OK. I finally decided on the placement for these little embellished banners. I put the card together onto a red base. I STILL did not like it.

Should I just give up and consider it a completely lost cause?

By this point, I have lost track of how many times and days I had set this aside. (It's a good thing I started this brainstorm so early!)

I added the little corner trim in the form of a thin strip of paper and a 1/4" dot punched out of the same paper.

And called it good. 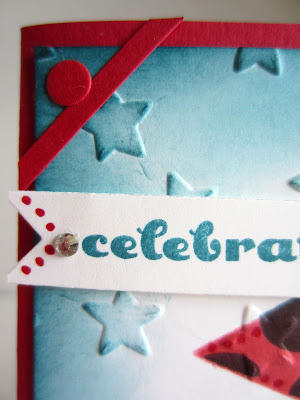 It has come to grow on me.