I have one last Christmas hurrah to share with you today. It just so happens to be the Christmas card I made for my granddaughter, Stella.

I had seen variations of Santa Claus faces consisting of pieces created with Stampin' Up! punches and/or Framelits/Thinlits on Pinterest. They were all adorable and just a little bit different from each other. I guess the reason for the differences obviously stem from the fact that rarely do we all own the same cutting equipment, and also the desire to make our creations in our own individual ways.

So, using the supplies that I possessed, this is the Santa card I came up with for Stella: 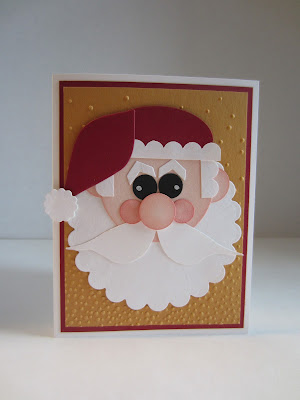 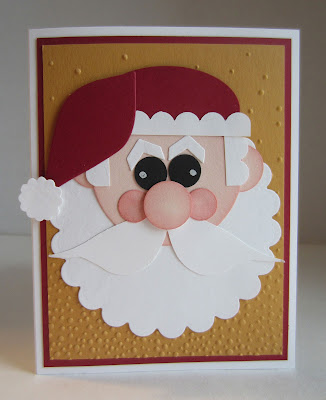 Aspects of my personal version of Santa that I especially enjoy are his eyebrows and his sideburns. I love his little chevron-shaped eyebrows. Without the sideburns, my Santa looked like an elf impersonating Santa Claus. Much too young to have the huge responsibility of circling the globe in the span of one night, distributing toys to all the good girls and boys.

I debated various ways of making the jolly gentleman look his age. Finally, I hit upon SIDEBURNS! Yes! It was the exact right touch to age my youthful Santa.

Take note that his large drooping moustaches are made from the bird body of the Bird Builder Punch. I needed to do a bit of selective trimming, but it did the trick.

To make the catchlights in Santa's big black eyes, I used the White Chalk Pen. Sponging around the nose and cheek circles added a bit of needed dimension.

The background utilizes the beautiful Softly Falling embossing folder. I love the effect it adds. 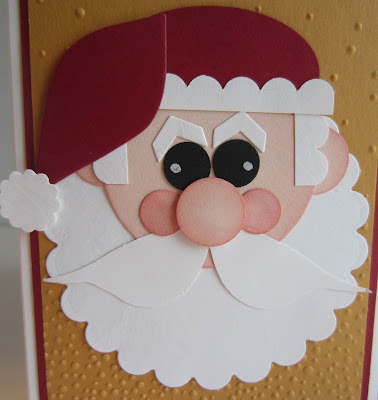