I went to jail again on Friday. Yup. I was there for two hours.

My initial visit to jail took place in mid-December. I have chronicled that experience HERE.

Since that visit went so well, when the possibility of doing it again came up a few months later, I signed on for another stint.

If you don't want to take the time to read my original post (but I really really wish you would), I'll admit that my visit to jail, our county jail, was to teach interested inmates to do cardmaking.

On the docket for this visit was Mother's Day cards.

I was to plan for 20 participants and they would make two cards each.

Apparently Mother's Day cards do not have quite the draw that Christmas cards do as we had only 17 sign up for the session. It ended up dwindling down to just 14 guys because three of them had been transported to prison before the class.

The first card I created for them to copy is pictured below. The size of the card is somewhat smaller than the traditional A2 size, measuring just 3 3/4" x 4 1/4". I had had some cardstock in this size languishing in my stash for some time, so when I came upon it, I thought the pieces would make adorable cards. The envelopes we provided for them were larger than A2, and I worried about this small card getting lost in a large envelope. Not to worry. Lots of the guys had the butterflies extending beyond the edges.

I had told them that this was just a suggestion, that the components I was providing them COULD make a card that looked like this. But, I encouraged them to do whatever they wished to make the card their very own.

Because if was a very VERY simple card to put together -- since I'd done all the work -- I was concerned that they wouldn't be kept busy enough with it. So, at the last minute I stamped out a flock of the butterflies from Papillon Potpourri (page 107 of the big catalog), the two butterflies with the flowers on them. I then punched them out with the two butterfly punches. This way, since they had markers, they could color them if they wished, leave them just stamped and fluttering around on the inside of the card, or whatever they wished. It was interesting to see the varying things the guys did. 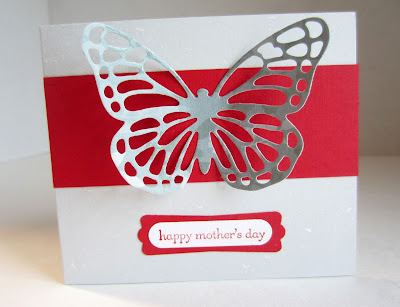 Since they didn't have the luxury of using Tombow Multipurpose Glue (green glue) and were forced to use glue sticks, I told them to put the glue only along the body of the butterfly so the wings could be lifted upwards -- once again only if they wished. 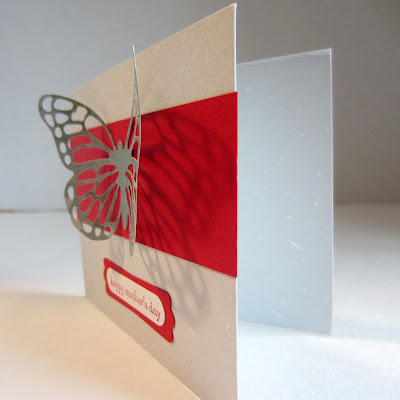 The second card components were something of a pleasing fluke. You see, a few years back, I had stamped the flower image with text onto various Designer Series Paper scraps. I then fussy cut them, and mounted them again to the white card onto which I had already stamped the same flower image. Yup. Paper piecing. A lot of work. But, if I hadn't done anything with them for years, why not use them for these cards??

As I was handing out the supplies for this card, I was able to tell my students just how to do fussy cutting and paper piecing. I don't think they were impressed.

Anyway, I searched through my colored cardstock to come up with a few pieces that would "match" the cards no matter what color the flower was that they had chosen. I then did the same with the ribbons. 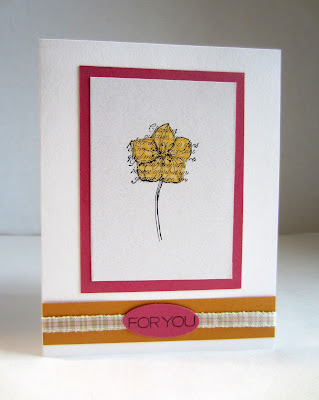 To demonstrate the different looks you can get by switching up and combining the colors, I presented two samples for them.

Once again though, I was nervous that these cards wouldn't take long enough and not enough effort on their parts since I'd done most of the work for them. So, once again at the last minute, I grabbed a few of my flower punches and punched a garden full of flowers in the two cardstock colors that they could decorate with markers -- or not -- and glue inside the card. Or whatever they chose to do. It was again very interesting to witness their creativity. To the point that they were asking if there were any more of those flowers left. So, I was left to scramble between the work stations, trying to get together any of the little wayward flowers that weren't being used. 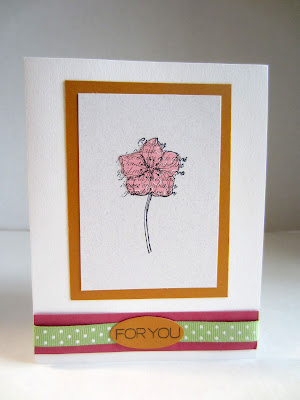 Because this card design was fairly generic, in that it simply said "for you" on the front, I told them that they could make it for any occasion that they wanted. However, if they wanted it to be specifically a Mother's Day card, I had brought along a stamp (an old Paper Pumpkin stamp) that said "Happy Mother's Day" and, if they wished, they should let me know and I would stamp that sentiment inside their card. I was surprised that the majority of them politely asked me to come over and stamp it inside their cards, sometimes even requesting it be stamped at a jaunty angle or in a different spot than traditional. 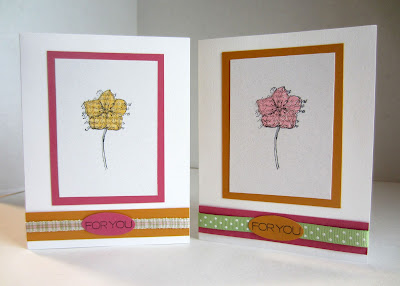 All in all, the guys, mostly in their 20s and 30s, were well-behaved and courteous. And worked very hard. A few shook our hands (there were two of us there to facilitate the activity) and thanked us.

Lori, the instigator of the outreach projects for Goodwill, told the guys that we would try to set up another session in the future. One of them shyly said, "Father's Day?"

So, obviously not only Lori and I, but our students also, enjoyed the couple hours we'd spent together.