As a Stampin' Up! demonstrator, we get a variety of perks. One of the recent treats was a series of three videos -- starring GNOMES! -- in which we were introduced to a selection of the new goodies coming out in the Holiday Catalog, Homemade for the Holidays. (It goes live on SEPTEMBER 1!)

In the videos, Shelli Gardner, Cofounder & Board Chair, and her darling daughter, Sara Douglass, our  new-ish CEO, were served up deep trays in which the products were nestled. They proceeded to go through them one by one, and show them to us demonstrators.

The first video featured a stamp kit/punch bundle. Cookie Cutter Christmas can be found on page 6 of the new catalog. The six Christmas characters, adorable enough by themselves, can be paired with a coordinating punch. Check it out -- even the reindeer head is inserted into the punch upside down! Clever clever clever!

After this brief introduction, I knew this bundle was going to be the first thing on my wish list.

Shortly thereafter, we could access the future catalog online, and lo and behold, what do you think I found on page 53? It is Cookie Cutter Halloween! A little scarecrow, wrapped mummy, bony skeleton and Dracula, plus extras like Dracula's ears, a bat, a crow, a bow tie (for that black tie event, you know) and a treat bag.

Well, as I had promised myself, once we could preorder from the catalog, the first thing I ordered was the Cookie Cutter Christmas bundle. A couple weeks later, I added the Halloween set to my stash. 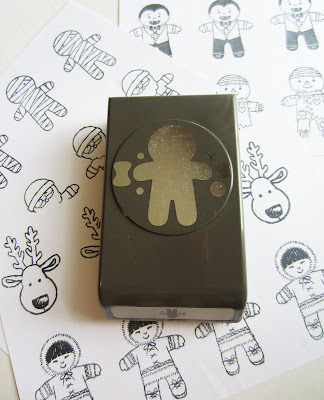 Yesterday, I stamped out several of the characters, all ready to have some "adult" coloring time.

As I sat gazing at my colorless victims, I noticed something a bit disconcerting. The Santa and the scarecrow had weird headgear.

I know this was intentional. Because if their hats were any more elaborate, they would not fit inside the parameters of the punch.

After some puzzling over this conundrum, I decided to help the guys out by giving them a makeover. 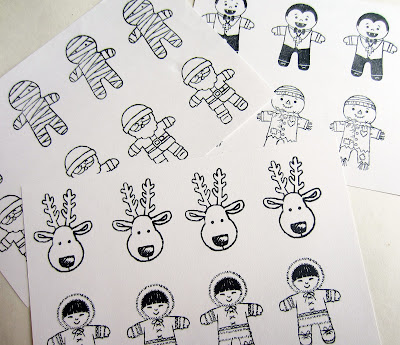 I got out my drawing tools and drew a new hat for the scarecrow . . . 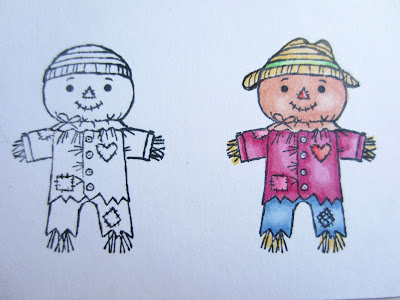 as well as one for Santa. 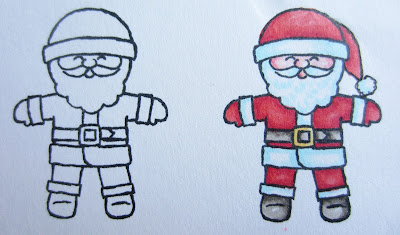 Once I was happy with their new caps, I traced them onto tracing paper with a pencil. I then scribbled in pencil over the lines on the reverse side, and transferred it by drawing over the lines again onto a piece of cardstock I could use as a template. Then I cut out my new hats -- to save for future projects.

I colored in the two guys with the incomplete hats, leaving the hat areas color-free.Using the template, I traced new hats onto white cardstock, outlined them with a marker, and colored them. They were then fussy cut.

The top row is the two waiting for their hats to actually land on their heads. The second row is the original pair that I drew over, colored in and fussy cut. You can see that those guys in the top row were punched out. 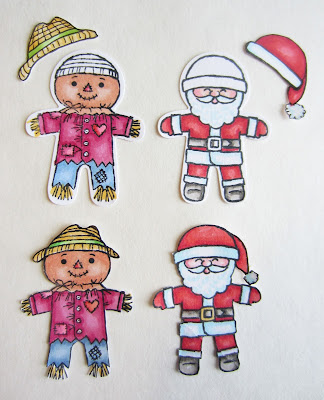 And here they all are, completely dressed and happy! 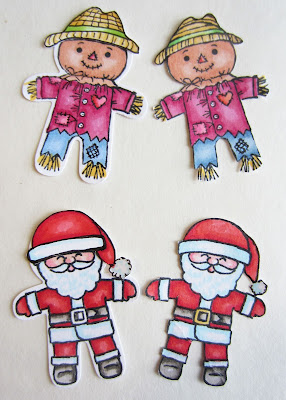 Yes, it's a lot more work. But, hey, it made my paper snips hand glad to be able to give them their REAL hats.

UPDATE: I finished another scarecrow tonight. But I left the knitted hat on his head. You know why?? 'cause I stamped the jeans on a tiny piece of Dapper Denim (what else???) cardstock, the shirt on a tiny plaid paper, and the hat on a piece of textured paper that looks sort of knitted. And I fussy cut all those little pieces and dressed the scarecrow. I even used the punch to punch out a teeny heart from DSP for on his little chest.

Stay tuned: You will see my finished card in an upcoming post. It is for my September Stamp-In Workshop. Shhhh. Don't tell my girls!

What is my problem?? Stampin' Up! makes it so easy and convenient to create cute little stuff, and I go ahead and make it a lot more work . . .

But, it makes me so HAPPY!