This card was nothin' but trouble. It required work on three separate days. And I'm still not sure if I'm satisfied.

But, I wanted to send you a bunch of tulips to wish you and yours a HAPPY EASTER.
So, here it is: 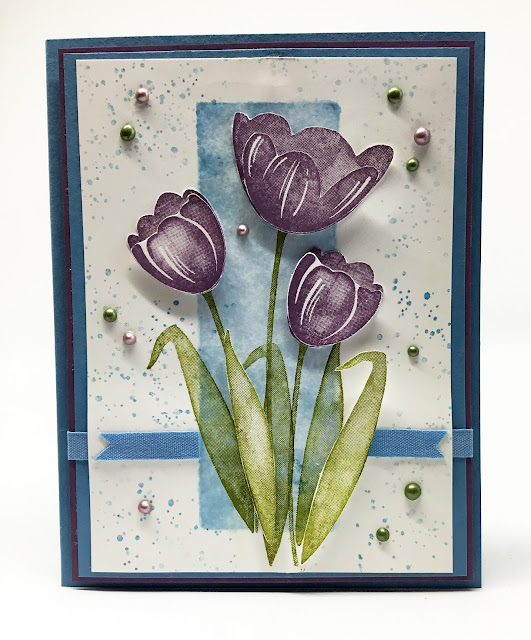 I used the ink-to-the-acrylic-block technique to create the backdrop for the three tulips. Even though I used only one color -- Marina Mist -- in the process, I expected my result to have more of a splotchy look. It was a little too solid for my taste. 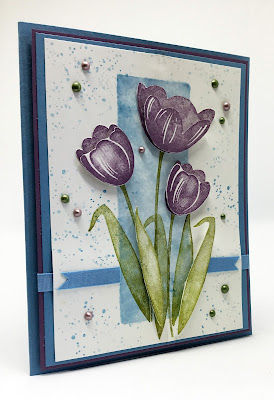 Then, I thought the tulip flowers from Tranquil Tulips (page 223) were 2-step stamps, as it says in the catalog. I could not get the two layers to line up pleasingly. So I ended up stamping all the separate elements on Whisper White cardstock, fussy cutting them, then using Stampin' Dimensionals to put them together. That probably was a better option anyway, as it made them look so much more realistic. Uh huh.

I stamped three of the leaves directly over the blue backdrop. I also fussy cut two more leaves and popped them up on the card. But I was frustrated that the leaf with the bent tip was so unyielding, looking the SAME every time I used it. I suppose I could have cut the tip off the fussy-cut one, but then it would have resembled the other plain one too much. Such a dilemma. Don't you wish all of life's problems were so MAJOR?? 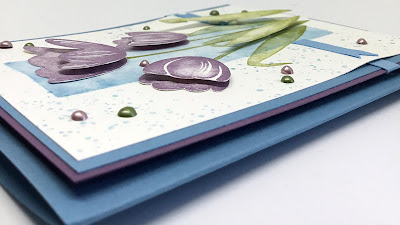 I decided to have just a bit of the Marina Mist cotton ribbon covering the two side edges of the blue/purple cardstock. However, -- yup, here comes ANOTHER problem! -- when I glued the white layer over the blue/purple layer, the ribbon showed up as a bump underneath the white. I COULD NOT leave that. But what to do to rectify this ugly situation? Well, you can see what I ended up doing. Meh. 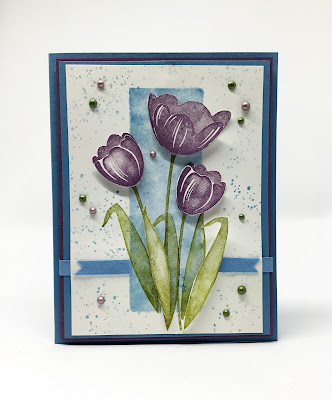 I had added some Marina Mist dotties (using the stamp from the Waterfront set on page 48 of the Occasions Catalog). Even after dotting the background, it still screamed out for MORE MORE MORE! 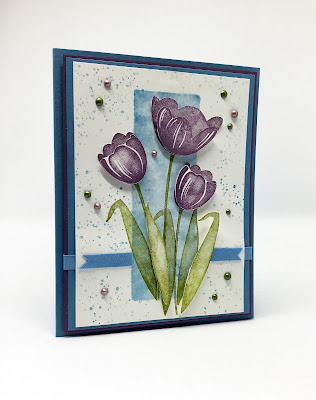 So . . . I had made some pearl-like embellishments awhile back with Nuvo drops, so I sprinkled them around on the background. I thought it looked OK. So I glued them in place. Now it looks like it has a contagious disease. Ugh. 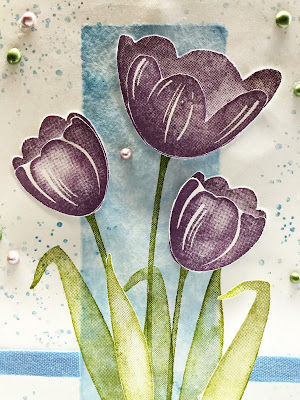 I have it standing on my desk alongside my computer. The more I look at it, the more it grows on me. Like a tulip. An Easter tulip. 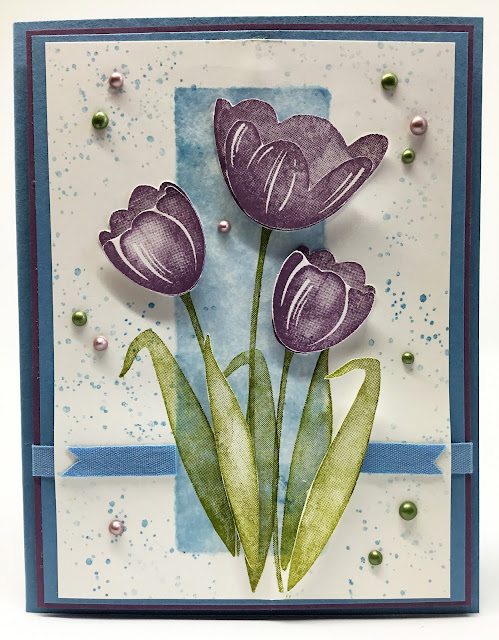