A technique that is really cool -- and easy! -- to do that I forget about is one that popped up recently when I was searching for a technique to show you. That technique is Embedded Embossing.

The background of the card below was created
using the Embedded Embossing Technique: 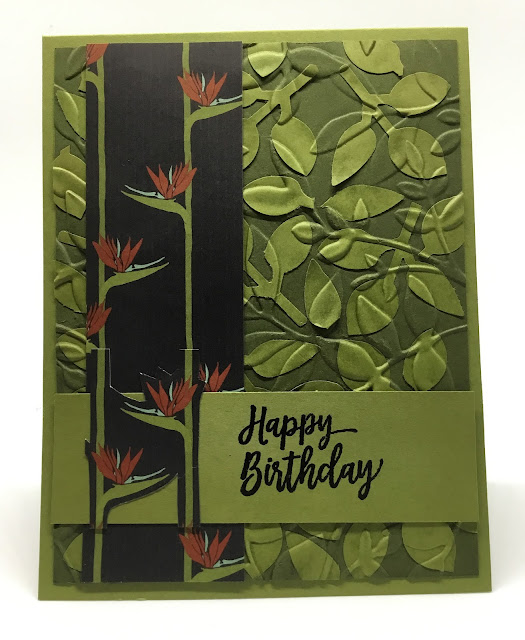 It has a lot of dimension, doesn't it? This one has even more dimension that you usually get when doing this technique. Why, you ask? Read on. 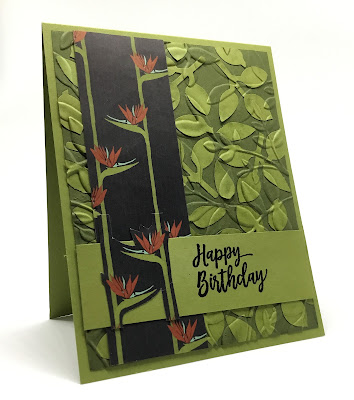 This technique is basically separate pieces that are attached to a piece of cardstock before running it  through the Big Shot inside an embossing folder. You can see that, in this instance, I chose to punch out leafy stems from Old Olive cardstock with the Leaf Punch. I then placed them across a 4" x 5 1/4" piece of Mossy Meadow (coming back in the big catalog!!) cardstock. They looked a little bit like rows of soldiers, which is a look that I didn't want. I wanted it to look somewhat more random. To alleviate that situation, I used the scraps from the first punchings to punch single leaves. I then filled in some of the empty spaces with them, and allowed some to hang over the edge, which is always good for a continuous look that doesn't appear to stop at the edges.

OK. To get a little extra  mileage in the embossing, instead of gluing all these leaves down flat, I left unglued edges on each piece.

This is now ready to run through the Big Shot. 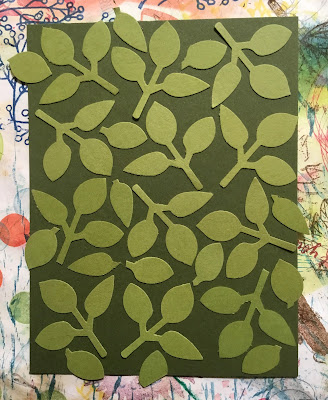 After the minor gluing job, I spritzed both sides of the piece with a little water to break up the paper fibers and soften the paper so it takes the embossing a little better. You see, I chose to use the Layered Leaves 3D Dynamic Textured Impressions Embossing Folder (page 211), which, when wetted first, yields a deep and super-dimensional embossing.

This shows the piece after it had been embossed. Do you notice some of the slightly lifted leaves? That's from not gluing them down completely. I think this adds to the illusion of a more densely leafed piece. 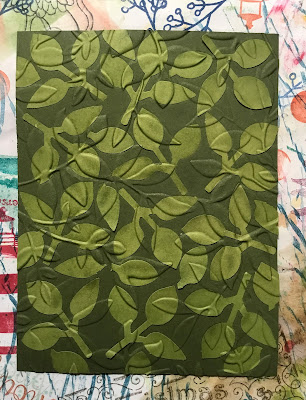 This next photo is a bit off-subject. But, after I'd finished the embossing, I flipped the piece over to add glue to it so I could adhere it to the Old Olive card base. What I found was kind of a surprise. It shows up a bit better in real life, but do you see the variations in the coloring of the Mossy Meadow background paper? Where it is darker is where I'd attached the leaves on the other side. I must admit that I was sorely tempted to use this piece. But no. That's not where I was going with this technique. 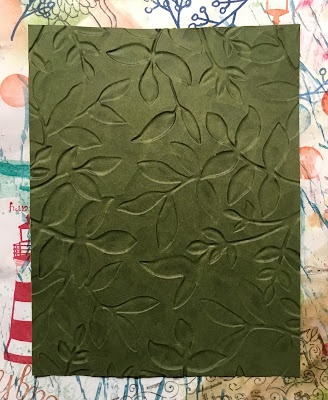 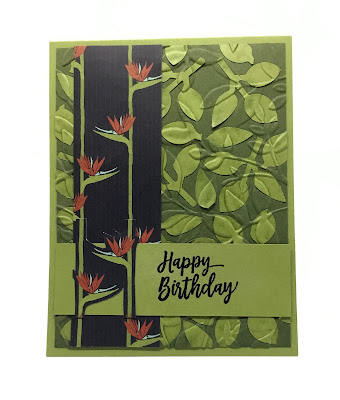 To add a little bit of another type of embossing -- heat embossing -- I stamped the sentiment in VersaMark and embossed it with black embossing powder.

The 4" strip with the embossed sentiment looked a little lost and barren lying across the pretty bird of paradise DSP. So how did I rectify that sorry situation? Look closely!

I took another strip of the DSP that was a little thicker than the Old Olive piece, and I fussy cut some of the birds of paradise -- just a bit, mind you. I then adhered it over the Old Olive strip, matching up the lines of my fussy cut piece with those of the already adhered strip of DSP. 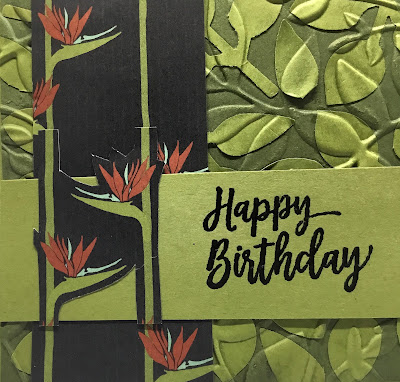 I love the look of separation and flowing lines the bit of fussy cutting
added to my sentiment strip! 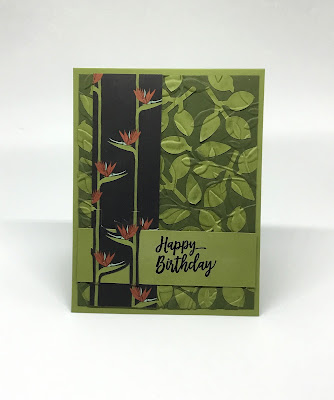 Just a little close-up of the embedded embossing. Notice the slightly lifted leaves. 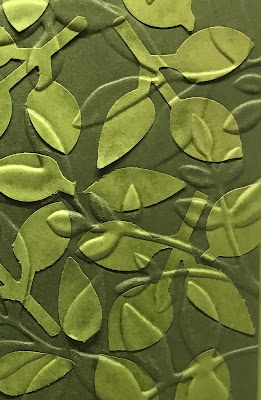 Have you ever given Embedded Embossing a try? If not, check THIS LINK for another example of a card done with this technique, as well as a tutorial as to how to do it. 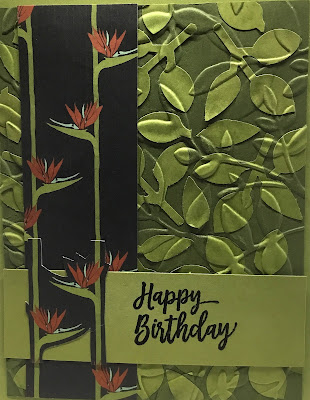