A bit of a departure here for me -- and you! I realize that I'm not exactly planting Paper Seedlings in this post. However, maybe I am, after all. You be the judge.

A little background on me: I started college in 1988 at the ripe old age of 36. I didn't have any real plans in mind for a degree. I'd just felt like there'd been a hole in my life, something missing, and had been for a long time. Actually, since I graduated from high school and went directly into the work force. Keep in mind that this was in 1970 when it wasn't so common to proceed with higher education like it is these days. This hole needed to be filled, and I thought working towards a degree would be the way to do it.

After taking my first class, Introduction to Literature, which I thought would be a sure and easy thing for me, being the voracious reader that I am, I had the taste for more. We have to keep in mind that, at this point, I was a mom of two daughters, an employee, a wife, and now wanting to be a part-time -- nontraditional -- college student. I figure the only way I'd be able to get a college degree would be to take the slow train, a class or two or three each semester.

With the taste for more education, I needed to decide if I was really serious, and what I would pursue if I was. All through high school, I'd thought the career for me would be that of a freelance artist. Bliss. Throughout the years from the 70s to the late 80s, I'd kept my interest in art alive somewhat. Now, being introspective about my future, I decided that I still wanted to pursue art. And, my area of interest was that of children's book illustration.

Once I got into my art classes, I had trouble with my hands -- arthritis and carpal tunnel syndrome -- so drawing became quite difficult and painful. After several semesters of drawing and painting, I finally concluded that I would not be able to carry on. So, still wanting a degree in art, I changed my emphasis to Photography. And, after nine years, I achieved my degree, a Bachelor of Fine Arts, Emphasis in Photography, Magna Cum Laude, in December of 1997. There. I had accomplished what I'd set out to do, for two years even attending classes at two Universities at the same time.

And, what did I do with that degree? Nothing. Absolutely nothing.

Sure, I entered and was juried into several exhibitions throughout Wisconsin, one even in Bethlehem, Pennsylvania, picked up a few awards, was published on the cover of a tourist magazine, was featured on the May 2005 page of an esteemed calendar. But, nothing to pay the bills.

Do I consider that degree a waste? Sometimes.

But I'm still glad I did it. It was a huge accomplishment for me at that time. Graduating from the University of Wisconsin at the advanced age of 45!

In the ensuing years, I have kept busy with my art, mostly just dabbling. Nothing serious. In 2005, I became a Stampin' Up! Demonstrator, and even that hasn't panned out as anything profitable. But, I stick with it because, hosting my monthly workshops, keeps me creative and artistically satisfied.

A few weeks ago, I joined in on a Facebook group, Creating Every Day, hosted by visual artist, Terry Runyan. I'd been a fan of her work for a long time, and when this opportunity arose, I asked to be accepted into the group. Recently Terry has been giving the members of the group a prompt each day. If we choose, we can draw our interpretation of the day's prompt and share it in the Facebook group.

I had been a lurker in the group initially, liking/loving and commenting on others' artwork. And feeling guilty that I wasn't participating fully. Finally, the other day, I gave myself a little push into the world of daily drawing prompts.

The prompt that day was "house". Uh huh.

Unlike my daughter, Freelance Illustrator Emily Balsley, I have absolutely no imagination. There is nothing in my head from which to draw. It's always been like that. In the past, I drew portraits of famous people, but always from a photo. In drawing, I'd always been good at putting my own spin on someone else's idea. A huge frustration for me. (Curiously, this is not the case with my cardmaking. I'd say 98% of my cards are originals. I pride myself on that.)

OK. A house. I can do that. If I drew out of my head, however, it would look like it had been done by a kindergartener. I know Emily refers to photos, etc., to help her with inspiration, so I thought that if a wonderful artist like Emily needs a little visual feedback at times, why, that would be OK for me too.

So I googled "house". I chose one that spoke to me, and proceeded with my prompt assignment, and below is the result: 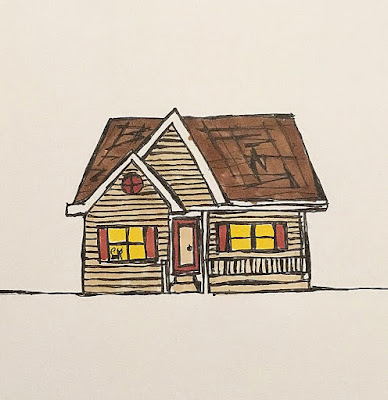 I am skipping the next two day's prompts because my results were not wonderful. Trust me.

The next day, however, I was pleased with my drawing, the prompt "turtle": 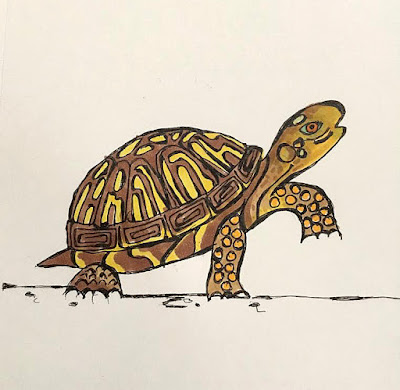 Yesterday's prompt was "musical instrument". It seems lots of the people in the group picked up the guitar, so to speak, for their drawings. I wanted something more childlike and colorful. (See? I still love the idea of illustrating for children!) So I chose a child's xylophone.

In doing my drawings, I first sketch them out in pencil, refine the drawing with a Sakura Pigma Micron pen, then with some loose Copic coloring.

For my xylophone, I had carefully chosen my rainbow of colors and had the pens lying in ROYGBIV order on my worktable. I was working blithely on my coloring, when I realized that I had one more rectangle to color and I had gone through all the markers -- so I thought anyway. This dork had completely skipped over the green!! Oh no. So I filled in the last one with a variation on purple (!). But it looked WRONG without the green. What to do?

Well, I considered this a "happy accident" and fixed it as you see below. I really like the end result. 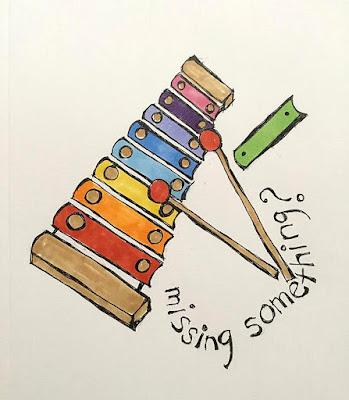 Terry usually likes to have the prompt for Saturdays be "caturday". Today was no exception. Being a lifelong cat lover, I looked forward to this assignment. To tell the truth, I really liked my little kitty BEFORE I colored him in. I should have just left him in the black ink. 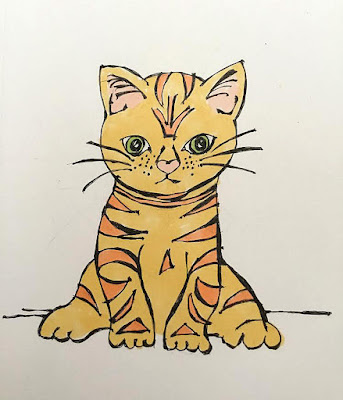 Anyway, I know this post doesn't give you any paper ideas, but I thought it might be a bright spot for you, my readers. If you would rather I stick to planting my Paper Seedlings along the cardmaking lines, please mention that in the comment area. Otherwise, I'm sure you will have to put up with my drawings from time to time.