Here I am, just having completed Week 5 (!) of my personal Christmas Challenge.

During this Challenge, I randomly (blindly) "choose" a Christmas stamp set that I have in my possession, many of them never even having seen ink. To make myself feel a little less guilty, I am forcing myself to create a card from each and every one of these sets.

As of today, I have completed using the "newer" stamp sets, in other words, those sets that come in the DVD type of case, not the plastic clam shell cases of days of yore. Now, I just have a handful of the older sets. These sets, for some reason or other, I have decided to never get rid of. Each of them possess some sort of charm that I find completely irresistible.

This first card, created last Sunday, features a gorgeous poinsettia from a few years ago. The appeal of this set for me is the fact that I can do two of my favorite things with it: color, then fussy cut it.

I love those poinsettias that seem spotty with a few pinks, reds, whites on their petals. I tried to emulate that look in my coloring, which was done, by the way, with Stampin' Blends.

The white background on which the poinsettia rests was embossed with a retired embossing folder that is filled with little poinsettias. Appropriate, eh?

The sentiment was simply stamped in black, then fussy cut and adhered to the embossed background. 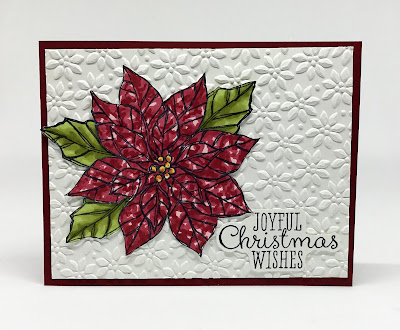 I must admit that I redid the branch of holly on this next card.

Using Blends once again, I ended up making the berries and the leaves much too dark the first time around. This was the result of the the built-in lines that simulate a woodcut print. I put the card together anyway, but every time I looked at it, I was almost depressed looking at the darkness.

So, after re-coloring the image with lighter versions of my colors (Poppy Parade and Granny Apple Green), it was vastly improved. My first attempt had been done with Cherry Cobbler and Old Olive. The background is colored with the light version of Smoky Slate.

I had on hand some non-Stampin' Up! cardstock that was a subdued textured silvery color that melded so well with the Smoky Slate.

Even though my touch of red in the matting is Cherry Cobbler, it still works very well with my newer lighter color palette.

Not showing up, of course, is the Wink of Stella I used on the berries. 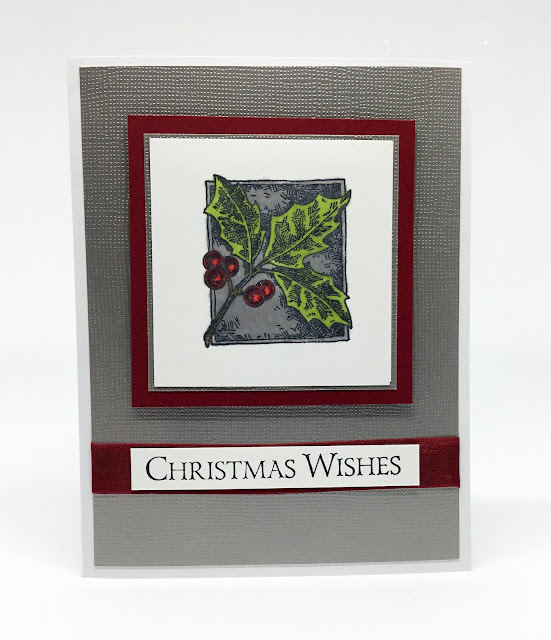 When I randomly picked this next set, which also features a peaceful dove, I was a little lost. That particular day I guess I wasn't feeling all that creative.

So I opted to work with the snowy house and surroundings, and, since it seemed so peaceful to me, I chose my sentiment to help convey this feeling. The sentiment also was part of the set.

I did the stamping in Basic Gray. I thought that looked a little more "peaceful" than a more stark black.

Since I wanted the snowy scene to seem welcoming, I decided to make it into a gatefold card. The two white embossed panels were, of course, embossed with the Softly Falling embossing folder, found on page 223 in the Annual Catalog. Against a Balmy Blue backdrop, I love the way the blue and white just seem so -- well -- peaceful.

Of course, I added Wink of Stella to all of the snowy portions of the top image. But no show in this photo. 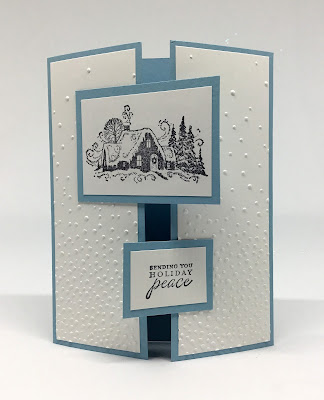 Another faux pas that I must admit to making is the next card.

Whenever I see this stamp set with its elegant swirly Christmas tree, I feel it screams to be embossed. So that's what I did. And proceeded from there. I had used the retired Pewter Embossing Powder against a new color for Stampin' Up! -- Gray Granite. I love the way the embossing powder and the gentle tannish gray complement each other so beautifully.

To finish the card, I continued with more of the Gray Granite, as well as some white ribbon. Ew. Ew. Yuck. I spent more time looking at that horrid finished card, hating it more each and every time I looked at it.

Thinking maybe I could salvage it, I started to cut it apart to have a whole new start, since I was very happy with the embossed piece, shown below.

Nope. So I ditched the embossed idea and remade the entire thing. Please see the next photo. 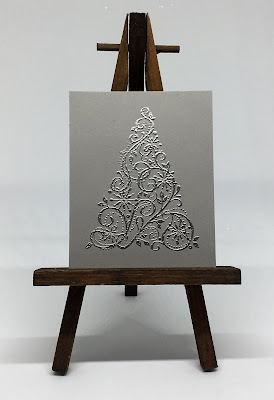 With a fresh new start, using the same two stamps I'd used in my first attempt, I was happily pleased to have come up with one of my favorite cards yet during this Challenge.

Even this card went through a couple of evolutions before it ended up the way it did.

To create the cool tri-colored background, I grabbed three of my acrylic blocks, each a different size. The largest block was inked up with Poppy Parade ink, spritzed with water, then stamped onto the background. I followed that with Balmy Blue and Granny Apple Green, with both of those colors overlapping the red. Scary, I know. Because red plus green equals brown. While that is true in my card, it is not ugly.

A few well-placed blocks of the solid colored cardstock finishes it off just fine. 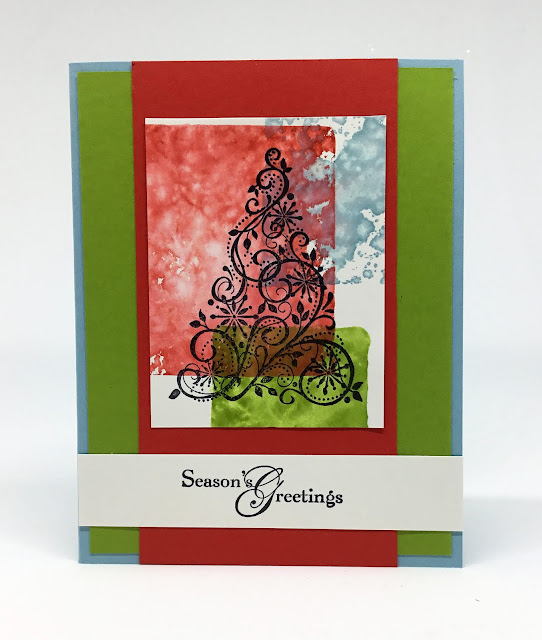 The stamp set I used on the next card consists of four stamps, the snowman with the words, the deer, the tree, and the snowflakes and dots combination.

I thought it would be cool to make a little snowy setting with all three, the snowman, the tree and little deer, all clustered together. Add some "snow" around the scene, and turn it into a snow globe.

Setting out to make a snow globe, that's exactly what I ended up doing. To get the three of them together so it looked like a scene took a little masking. But it turned out really well. Although I don't like the fact that little deer loses his right antler and mr. snowman lost his left arm, both among the branches of the tree.

I cut a circle from some of our woodgrain DSP, then cut that in half, to be used as the "wood" base for my snow globe.

I added three white snowflake sequins and centered three Pool Party sequins in the center of them. I also added a drop of Dazzling Diamonds glitter to the center of each of the stamped snowflakes "inside" the globe.

The whole snow globe is popped up with Dimensionals against a 4" x 4" card base of Pool Party that had been embossed with the Softly Falling (again) embossing folder. 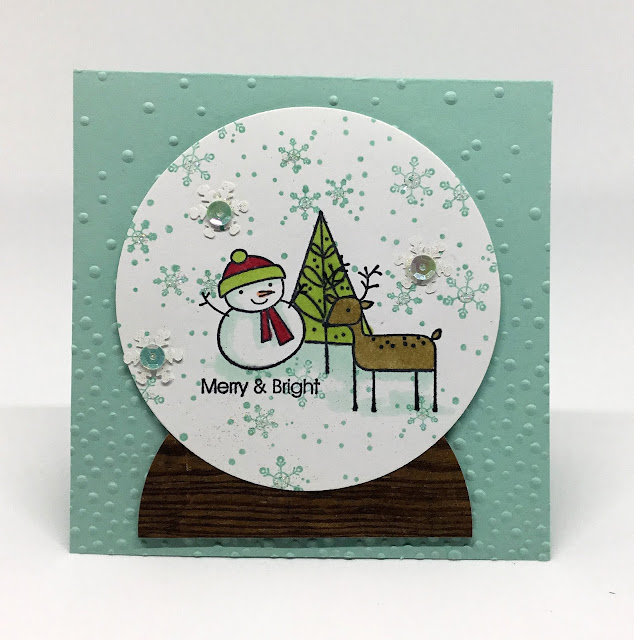 The next card, fairly simple and straightforward, was fun to create. The rows of deer, trees and snowmen all comprised one single stamp.

After stamping the image in Memento Tuxedo Black on Whisper White, I had lots of fun coloring it all with Stampin' Blends.

Once the coloring was finished, I added Wink of Stella to the saddles on the deer, the stars on the trees and the hats and scarves of the snowmen. Of course, that little twinkle does not show up in the photo.

To provide a little divider between the busy colored piece and the busy DSP I chose to surround it, I added a very thin margin of black before adding it with Dimensionals to the DSP, then to the Pool Party card base.

After I had the card all put together, I realized that a simple addition would maybe have improved the overall look of the creation. Before adding the colored piece to the black margin, I think it would have been cute to run red and white baker's twine across the white space between the three different images. Thoughts? 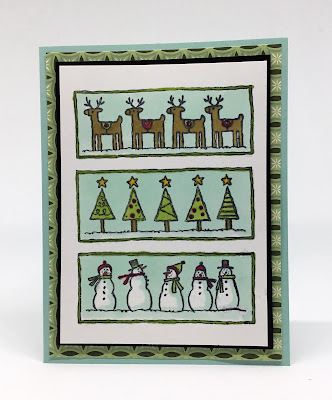 Finally, today's card, shown below, was super fun to do. And fast!

I liked the colored and spritzed backgrounds of the red/blue/green card so much, I decided to do that same thing to create a background for these snowflakes. (More snowflakes!!) I used the smallest Clear Block, Block A, to do my "stamping" on the background.

The blocks were inked up with Balmy Blue, Highland Heather and Granny Apple Green, spritzed with a small mist of water, then stamped randomly over the background. After the squares had dried naturally, I stamped the snowflakes in Memento Tuxedo Black ink over them.

Since the card was so busy, I made my sentiment fairly simple, giving the eye a little break from all the fun going on in the background. 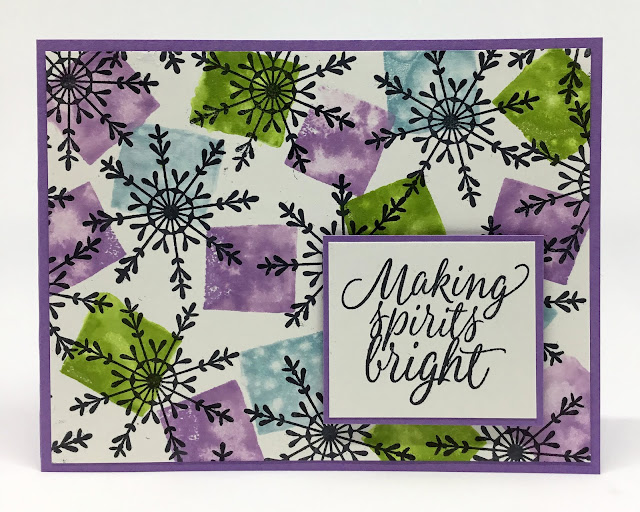 I still have more stamp sets to go into Week 6. I hope that's OK with all of you and that I'm not boring you. Hopefully I am succeeding in planting a few Paper Seedlings in your creative brains!

Thank you for sticking with me on this journey these past few weeks. I'm having a lot of fun -- hope you are too!