As it always is, the August 2019 Paper Pumpkin kit was adorable. The contents of the kit were meant to be used to make fall-flavored treat bags.

Well, Stampin' Up! hadn't done this before -- at least, not to my recollection -- but to coordinate with this kit, they also offered an add-on bundle. With this bundle, rather than use the kit elements to create treat bags -- something which many Paper Pumpkin subscribers may have no need for -- the add-on bundle enabled purchasers to make cards instead.

There were two card designs in the bundle. Two of my stamping friends, who had also purchased the bundle,  got together with me at my house and we had a lovely time making card after card after card. The possibilities were endless, especially if you were willing to dig through your stash for even more creative elements.

While I did make many of the cards using the Paper Pumpkin components, I eventually moved on to a different drummer. As I almost always do. I still used the cute card bases, which measured 3 1/2" x 5" with matching envelopes, but I incorporated a few other elements.

Do you recall, when the new Annual Catalog was released in June of 2019, there was a Suite,
Bird Ballad Suite (pages 90-92), that cause a lot of excitement? One part of this Suite was the lovely Designer Series Paper, found on page 92.

Several of the sheets of this DSP consisted of many many birds. Being an avid fussy cutter, this was right up my alley. Balmy summer days on the deck found me cutting away at these birds (and feathers) until I had more birds than I knew what to do with.

I grabbed the packet of birds I'd fussy cut and added a few of them to three of the cards I made with the Add-On Bundle. I love how they look in their new homes!

This first card used a burgundy diecut circle that came in the Paper Pumpkin kit. After digging through my many past Paper Pumpkin kits' stamp sets, I came across one that I decided to use on the card. That stamp, the lined circle, was stamped on the circle in VersaMark ink, then embossed with white embossing powder. I took some of the snazzy ribbon that came in the kit and added it in loops to the lower right of the embossed circle. I also added a diecut tan branch that came in the kit. My cute fussy cut bird is perched atop the branch.

Using another stamp from the kit where I found the lined circle, I stamped "happy" in Merry Merlot on Whisper White and popped it up with Dimensionals above the bird's head. Inside is the rest of the sentiment, "birthday" in the same font and color. 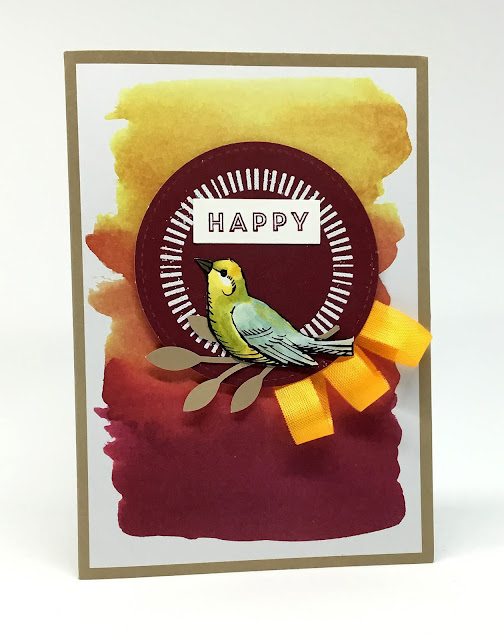 The second card is much simpler than the first. I used the other style card base, which is a gorgeous Pretty Peacock color, with the autumn wreath already printed on the card. I simply added another of the tan diecut branches and perched another of my fussy cut birds on top of it.

This card obviously can be used for any number of occasions. It would even work well for a masculine card! 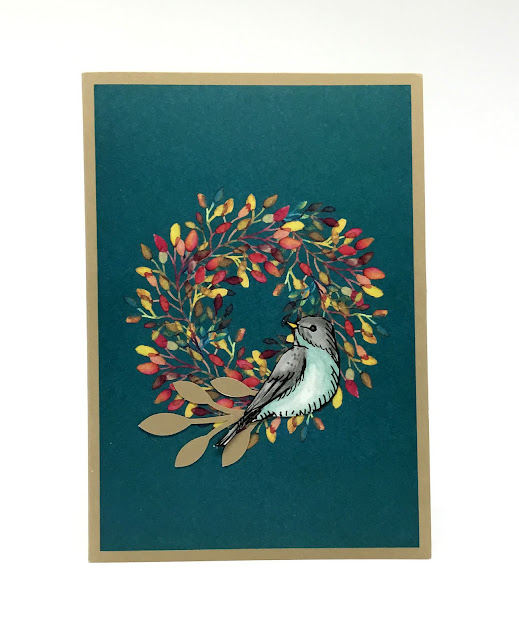 The third card is also quite simple. Using one of the diecut circles again, I stamped the word "thanks" in VersaMark and embossed it with white embossing powder.  This stamp with the awesome calligraphy is from another past Paper Pumpkin kit.

Our fussy cut bird is perched atop another diecut leafy piece that came in the August Paper Pumpkin kit. 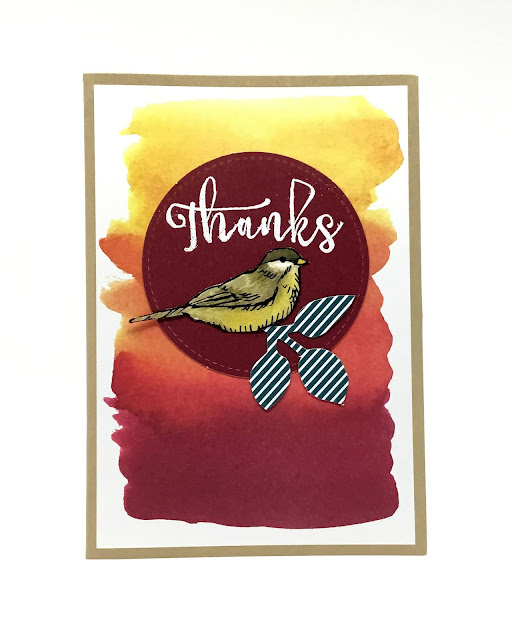 There! Now I have three fairly simple cards on hand. And three of my fussy cut birds found permanent homes!

OK. This next thing is something a little weird about me. Each evening I draw the prompt for the next day for the #dailycreating group. As I am shutting down for the night, I close my computer, stand the night's prompt drawing on its easel on the cover of the computer. I also usually add a card or two (or three) that I'd been working on. So, when I come into my room in the morning, I am greeted by a little creative tableau that I'd set up. Weird, huh? The photo shown below is what I got up to this morning.

FYI, as soon as I publish this post, I am going to finish my drawing for tomorrow, which happens to be of a young orangutan's face. I have it all drawn, but it's the coloring that takes me forever. So, wish me luck! 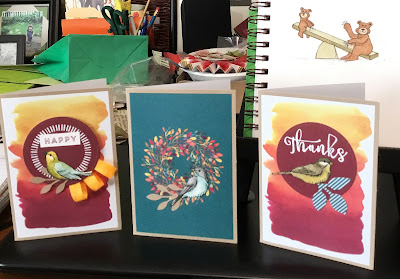