Awhile back I needed two single stems of this beautiful poppy (Painted Poppies, page 29, Annual Catalog). I grabbed a scrap of white cardstock and stamped them in Tuxedo Black Ink head to head because the strip wasn't all that long. When what to my wondering eyes should appear but a MESS.

In my attempt to fit both poppy stems on the single strip of cardstock, I overlapped the flowers. About to toss the scrap in the garbage, I took a better look at it, and discovered that it looked sort of charming, with almost an Art Deco look.

You ask, "What does Linda mean by Art Deco?" Click on this link about florals in the Art Deco design. 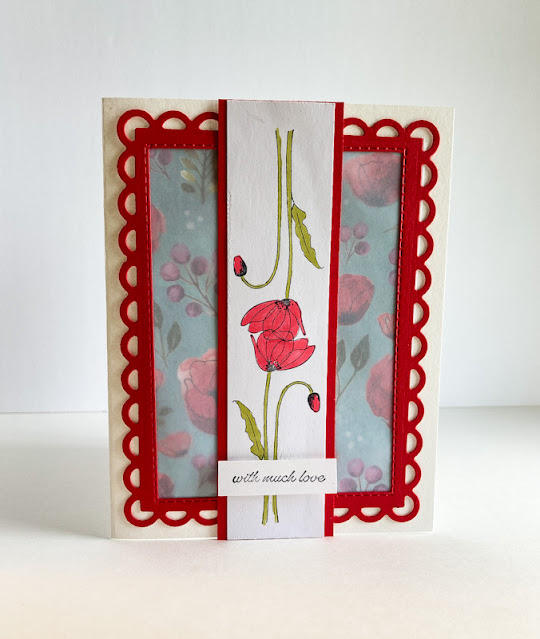 With this realization, I became enamored of my little mistake and decided to go with it.
Using Stampin' Blends in Light Poppy Parade and Light Old Olive, I colored in my head-to-head poppies, leaving them on the original strip of white cardstock.
From here on, it became much more complicated than I would have liked it to have been.
I'd decided to use vellum over a piece of the old poppy Designer Series Paper that originally coordinated with the stamp set. Well, I guess it still does coordinate, but the DSP is retired. 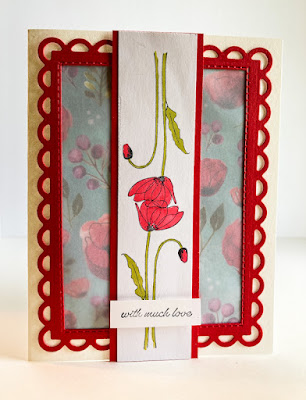 As you probably already know, dealing with vellum and adhesive -- whoa!
To alleviate that sticky situation (ha!), I cut a Poppy Parade frame using the Scalloped Contours dies (page 174, Annual Catalog). Since this didn't have a hole in the middle to serve as a frame, I used one of the Rectangle Stitched Framelits in a suitable size to cut out the center.
The next step was to adhere the vellum to the back of the frame, then, after cutting the DSP to 3 1/4" x 4", I followed with that right behind the vellum. I then added this to a white card base. 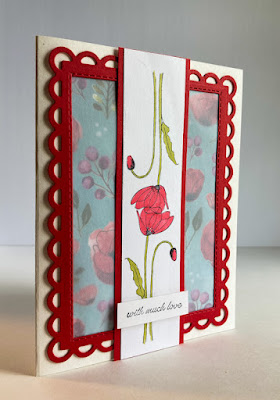 To add a little more security to the vellum/DSP, I mounted the poppy strip to a 1 1/2" x 5 1/2" strip of Poppy Parade cardstock, and adhered that flat to the center of the card.
I popped up a sweet little sentiment (Through It Together, page 69, Annual Catalog) on a strip of white that measures 1/2" x 1 1/2", in Memento Tuxedo Black Ink and popped it up at the bottom with Stampin' Dimensionals. 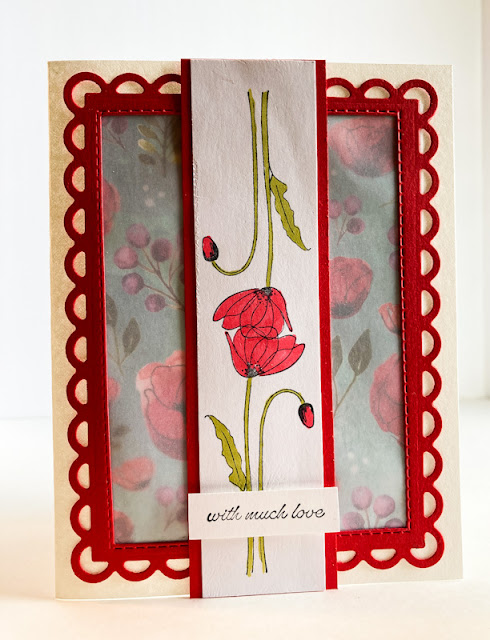 Do you ever have happy accidents like this that turn out to be little gifts in disguise? Do you always recognize it and proceed with a new plan?
Poppy
Smiles