A family wedding anniversary is coming up quickly, and since I wanted to create a card for this post, I decided this was the time to make a card for their special day. 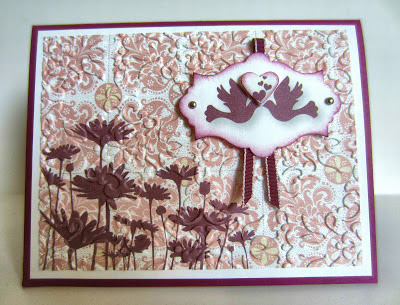 I perused my big binder of stamp brush images for MDS, picking out sets that contained possible images that would be good for a card such as this.

I decided on the corner of flowers from the Upsy Daisy set, choosing to recolor the flowers in Rich Razzleberry, and decreasing the opacity to make them a bit more subtle so they wouldn't be the main attraction on the card.

While the full Upsy Daisy stamp set is now retired, you can still get a smaller version of this image in the Best of . . . 25 Years stamps sets in the Flowers set from March. The rest of the stamps available in the March Best of . . . Flowers can be seen here:
http://www.stampinup.com/us/documents/DEMO_Best_of_Flowers_25th_Year_flyer_NA.pdf
They are just the prettiest of the pretty.

Such an elegant image deserves an equally elegant background. So, from my MDS Designer Series Papers selection, I dropped in a background from the Beau Chateau DSP.

To add to the loving theme of an anniversary, I added to a separate page the love birds from the Meant to Be set, keeping their opacity at 100% since they were supposed to be the "stars" of the card front.

Once I was satisfied with my card front and my love birds, I printed them out on my printer, then proceeded downstairs to my workshop to finish it off as a hybrid card.

I first cut down the card front to 3 3/4" by 5". To add to its elegance and to give it more dimension and interest, I ran the panel through my Big Shot inside an embossing folder. I then mounted it to a 4" x 5 1/4/" piece of Whisper White cardstock. This went atop a Rich Razzleberry card base in the traditional size of 4 1/4" x 5 1/2".

Inside, I added another panel that I created in MDS using stamp brushes from Party Time II -- Wishing You a Happy, and another from Fundamental Phrases -- Anniversary, as well as a border from the Meant to Be set, all in Rich Razzleberry.

The love birds were cut with one of the labels from the Apothecary Accents Framelits. I sponged the edges with Rich Razzleberry ink, and added two silver 1/8" Mini Brads on each side. A looped piece of Rich Razzleberry 1/8" Taffeta Ribbon was added to the back of the label. 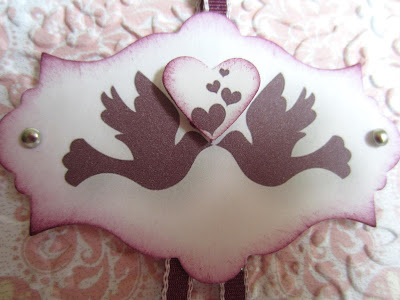 Besides having just released their brand spankin' new catalog (click on it on the right of my blog!), Stampin' Up! has two cool promotions going on:

Through the end of June, you can order three of their popular sentiment sets, so crucial in card making, at an amazing 25% off.

The other special, that I mentioned in a blog post when the promotion first began, is 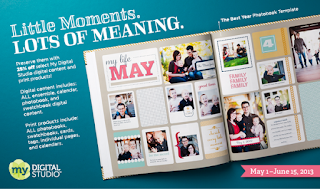 The MDS 25% savings promotion only lasts, however, until June 15!
And it even includes their printing prices!

Time to get your craft on!! I hope I inspired you!