Do you remember a few months ago when, in this post, I pleaded for your help?? I had made a card using the Black Magic technique:

BLACK MAGIC: On a dark-colored cardstock, stamp a solid image -- as opposed to an outline image -- in White Craft Ink. With your Heat Tool, make sure the white ink is completely dry, no shiny spots remaining. Once it is dry, use colored pencils to color the image, covering the white ink completely. After coloring, further decorate your design with white dots and lines.

I thought the card I had come up with was completely hid-ee-us. And I asked for suggestions to help me make it better. And I promised I would utilize some/all of your suggestions to try it once again.

Some of you were so --kindly, I'm sure -- complimentary about my creation. But, a few of you actually did put your thinking caps on and shared some wonderfully constructive criticism on how I could improve the looks of my card.

First of all, thank you to all of you who posted comments on the card, whether they were "nice" or helpful. As promised, I did take some of the suggestions in an attempt to make it better.

A few that I incorporated:

OK. While I didn't do EXACTLY as you suggested in all the cases, I did try to put my own spin on them. Without success.

Even though I spent about TWO HOURS on this travesty, I think it is even more hid-ee-us than my first attempt: 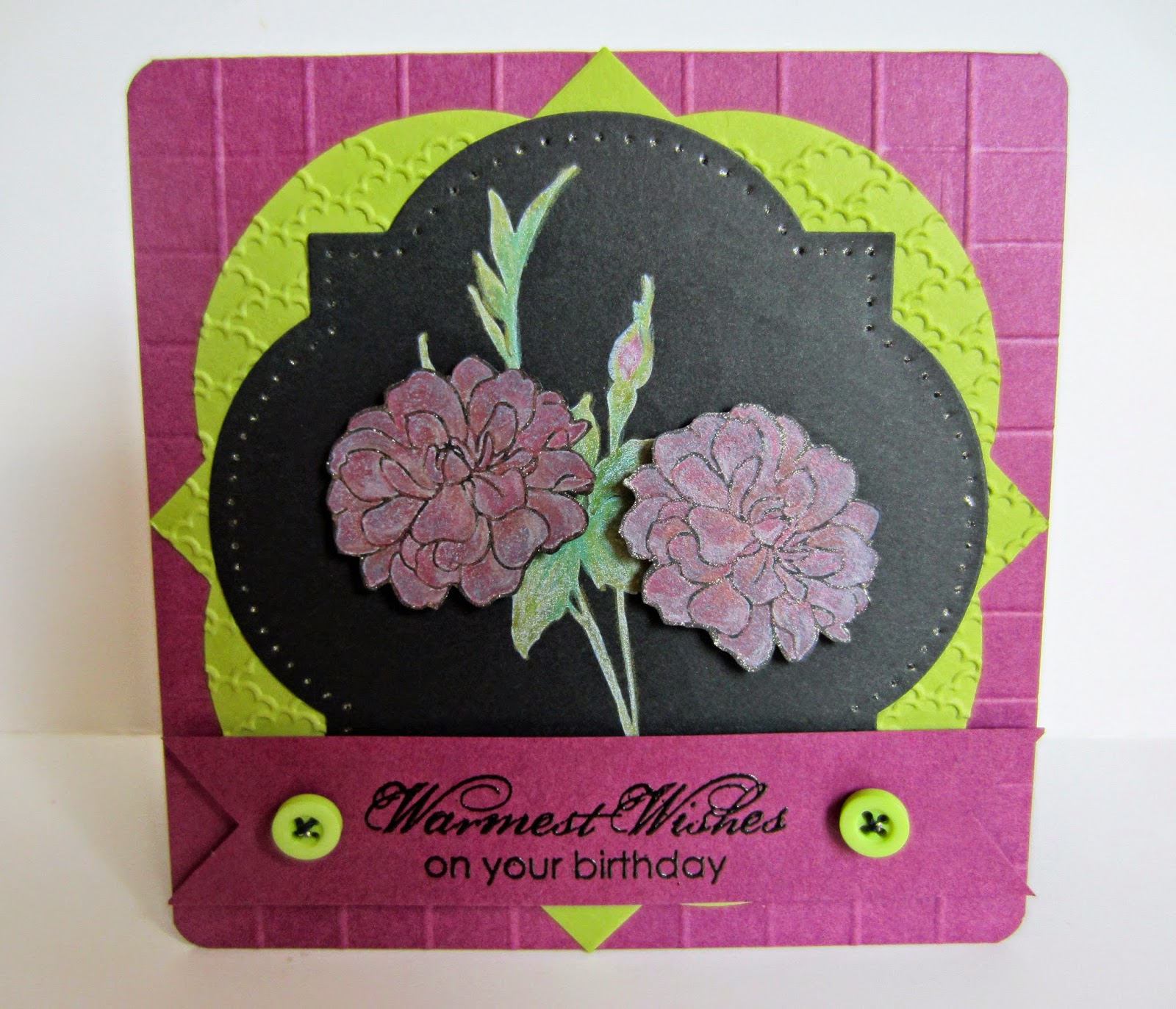 When I finished it, all I could think was "blecch". What a blah, characterless card. At least, the many white dots made my first attempt a little more lively. (Personally, I didn't like the white dots either. Thus I eliminated them completely. Maybe that was my mistake.) This one deserves a funeral.

Honestly, when I looked at it, I was dismayed at how really dead -- lifeless -- it looked. What could I do to give it a bit more sparkle??? Hmmmm. SPARKLE!

So I dragged out a pen I had from Sakura and sparkled up all the black lines in the flowers. I then placed the pen inside each of the pierced holes around the edge of the black frame to extend the sparkle a bit more.

The only way you could see this "improvement" -- if you could generously call it that! -- was to hold it at an angle.

Anyway, as you can see, I added texture in two places, replaced the white dots around the edges with piercing, popped up the flowers, and completely eliminated the distraction of the crazy white dots. 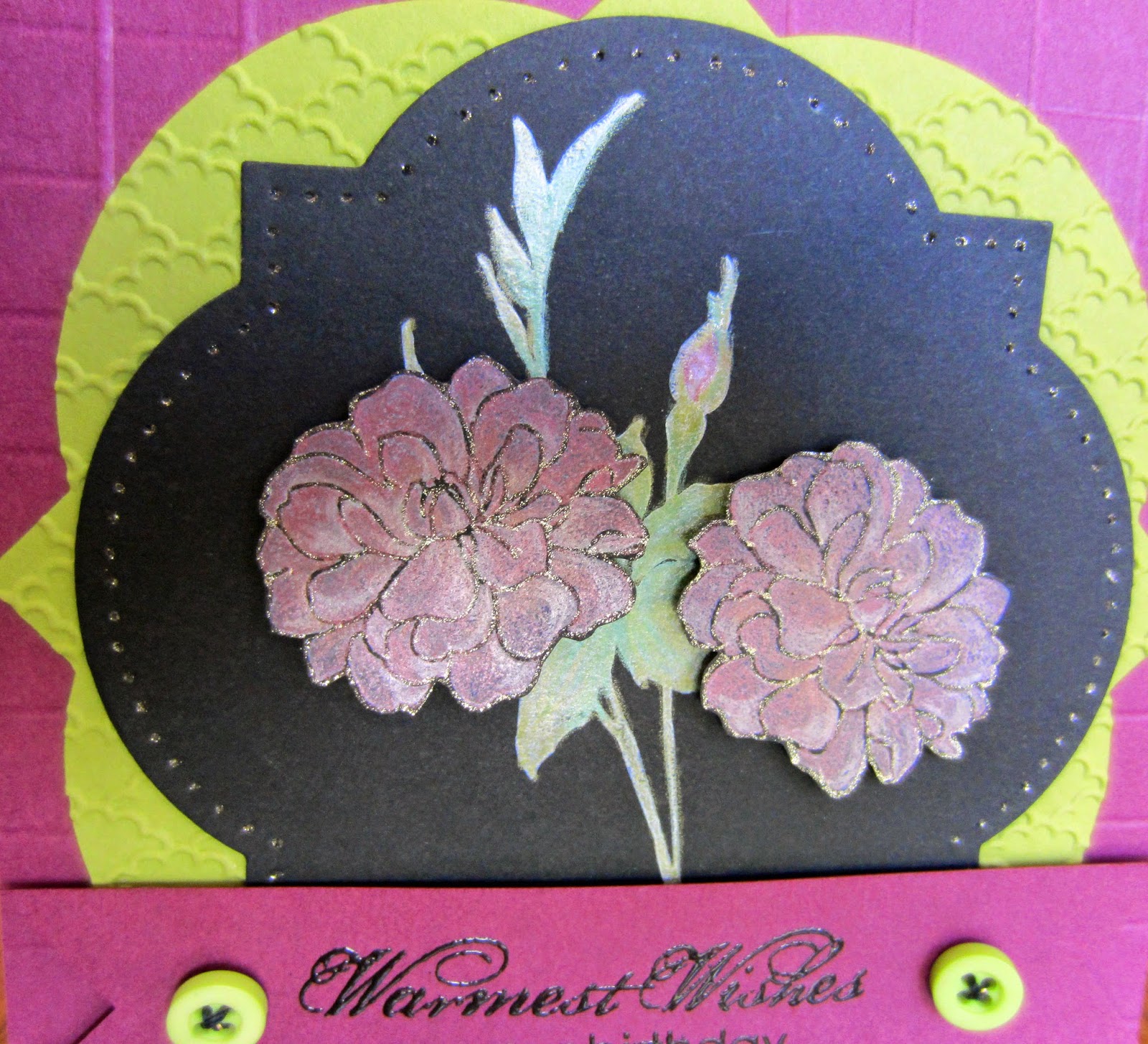 Here are the two cards side by side: 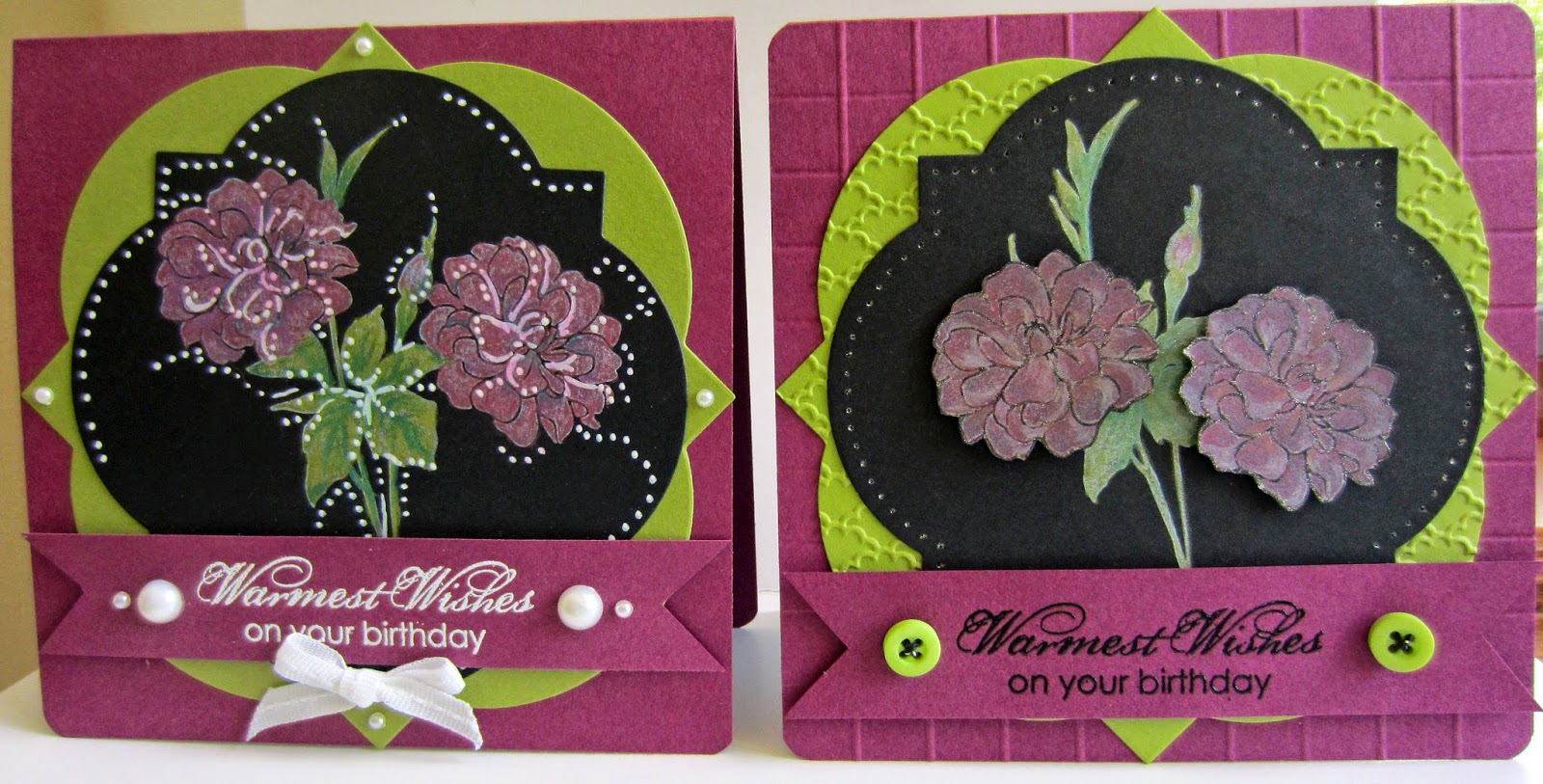 Will you all be attending the wake? Because, seriously I give up. I guess I'm not meant to be a Black Magic kind of woman.

Come up with your own version of a card utilizing the Black Magic technique. C'mon! I know you can do lots better than I did! Email your card to me, and I will feature all the Black Magic cards I receive from you on a future post. OK? Please give us all some eye candy to drool over! Show me up!