If you are a follower of the super-sensational social media platform Pinterest, you know that lots of times people pin their Pinterest fails to one of their boards. In other words, they tried something they had discovered and pinned on one of their Pinterest boards, and then tried to do the project themselves. But, unfortunately, these projects don't always turn out as beautifully as the original pinners' did. Thus, Pinterest "fails".

Well, I have a few of my own fails to share with you. They, however, will never make it to Pinterest in any way, shape or form.

The Nature's Peace stamp set, found on page 26 of the Holiday Catalog, is so beautiful and fitting with all the strife in the world as we know it. To me, the set lends itself to many different techniques, only a few of which I have attempted with it so far.

First of all, peace on earth and music? A harmonious partnership. I tried an emboss resist with it. Some time ago, I had ordered from Dover two miniature music manuscripts by Beethoven and Hayden, figuring that their diminutive sizes would lend themselves beautifully to crafting. (These pages of music are WHITE, WHITE. So, if you want a creamy look to your creation, you will have to "age" the pages in your preferred manner.)

Well, I decided to keep mine white, and add color to it. I embossed the image across the music in clear embossing powder, figuring that the music showing through the design would be pretty. Uh uh. Bor-ing. Even though the colors I was using for the sponging were light, Pistachio Pudding and Pool Party, I tried my hardest to sponge them as dark as possible to make the image pop. It obviously did not work. I didn't want to go much darker with my ink choices, for fear that the music would not show through well enough. Yuk. First fail. 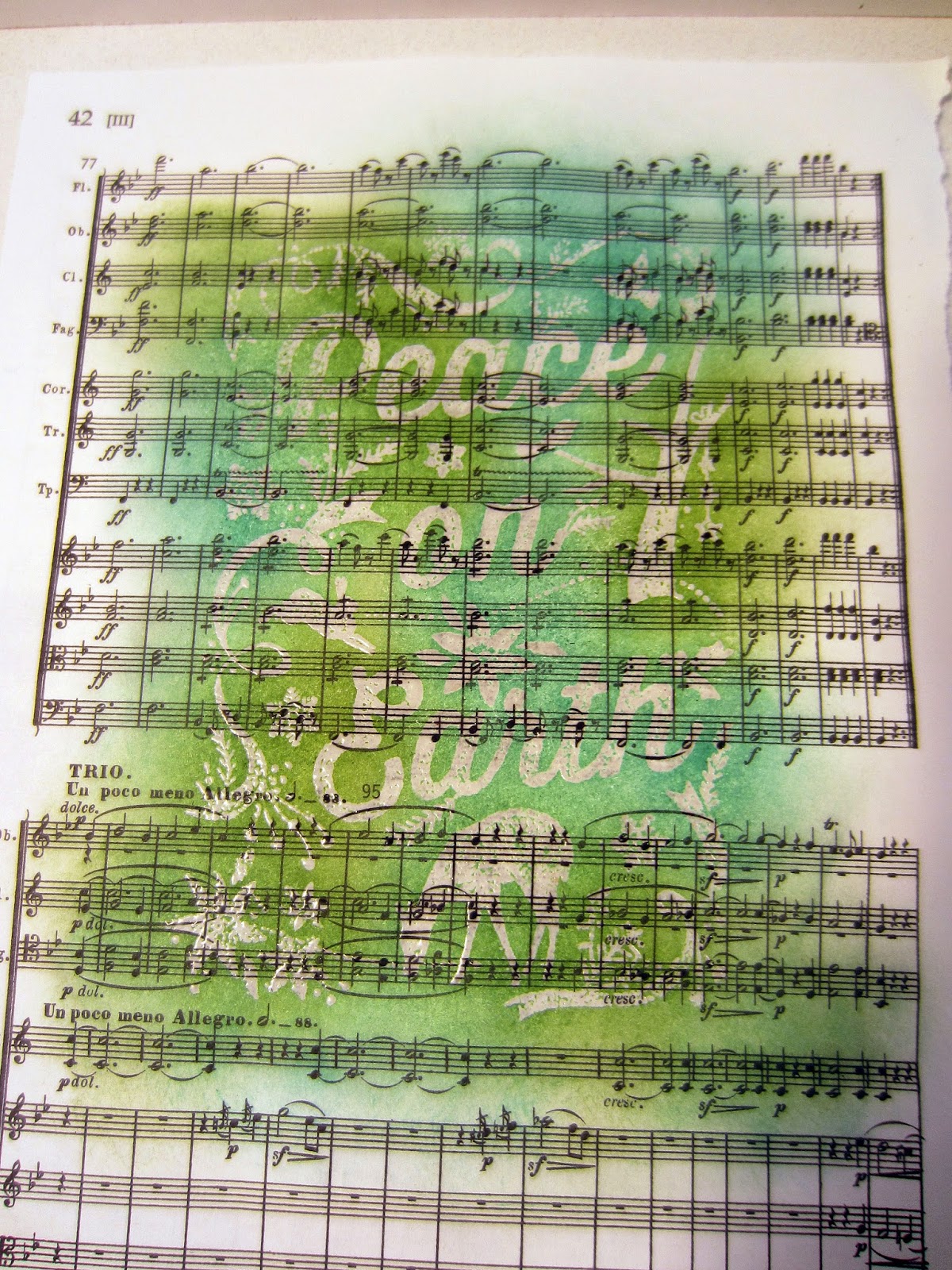 I thought this image would look beautiful simply embossed in a metallic on a dark colored cardstock. First of all, you MUST be careful not to add VersaMark too heavily to the stamp so it shows up at the edges. At first, I told myself that the embossed edges of the stamp in gold on Night of Navy were fine. That they delineated the image and finished it off. Nope. It just looks plain sloppy. I also realized that I had made some sort of a mark between the word "on" and the tree, so part of the embossing was rubbed off and the mark shows. Yuk. Second fail. 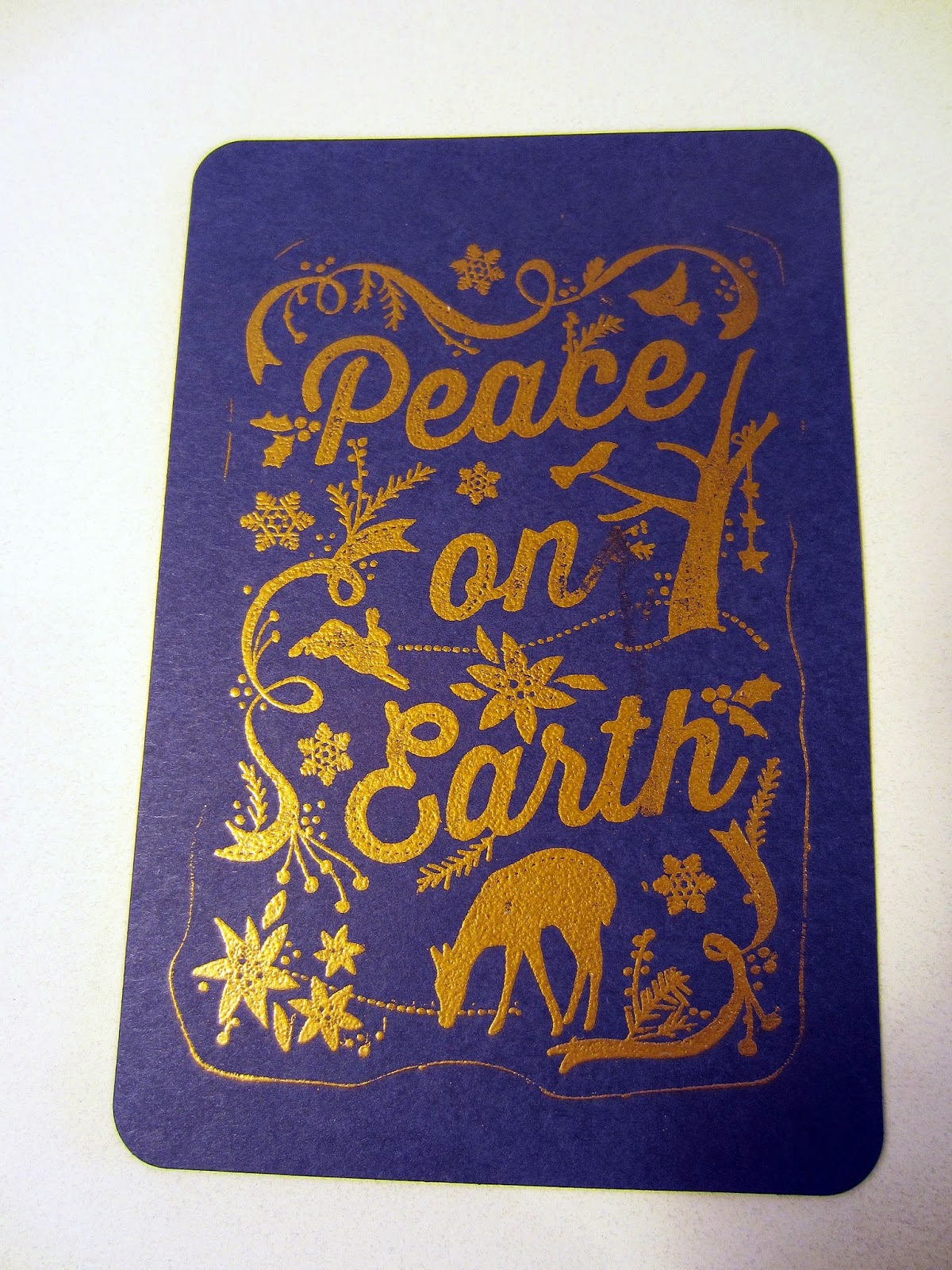 THEN, I thought the image would look pretty against a watercolor-y background created by coloring with Stampin' Write Markers on an acrylic block, spritzing it with water, then stamping the block onto the paper. I stamped the image in black against that background. Another yuk. Fail #3. 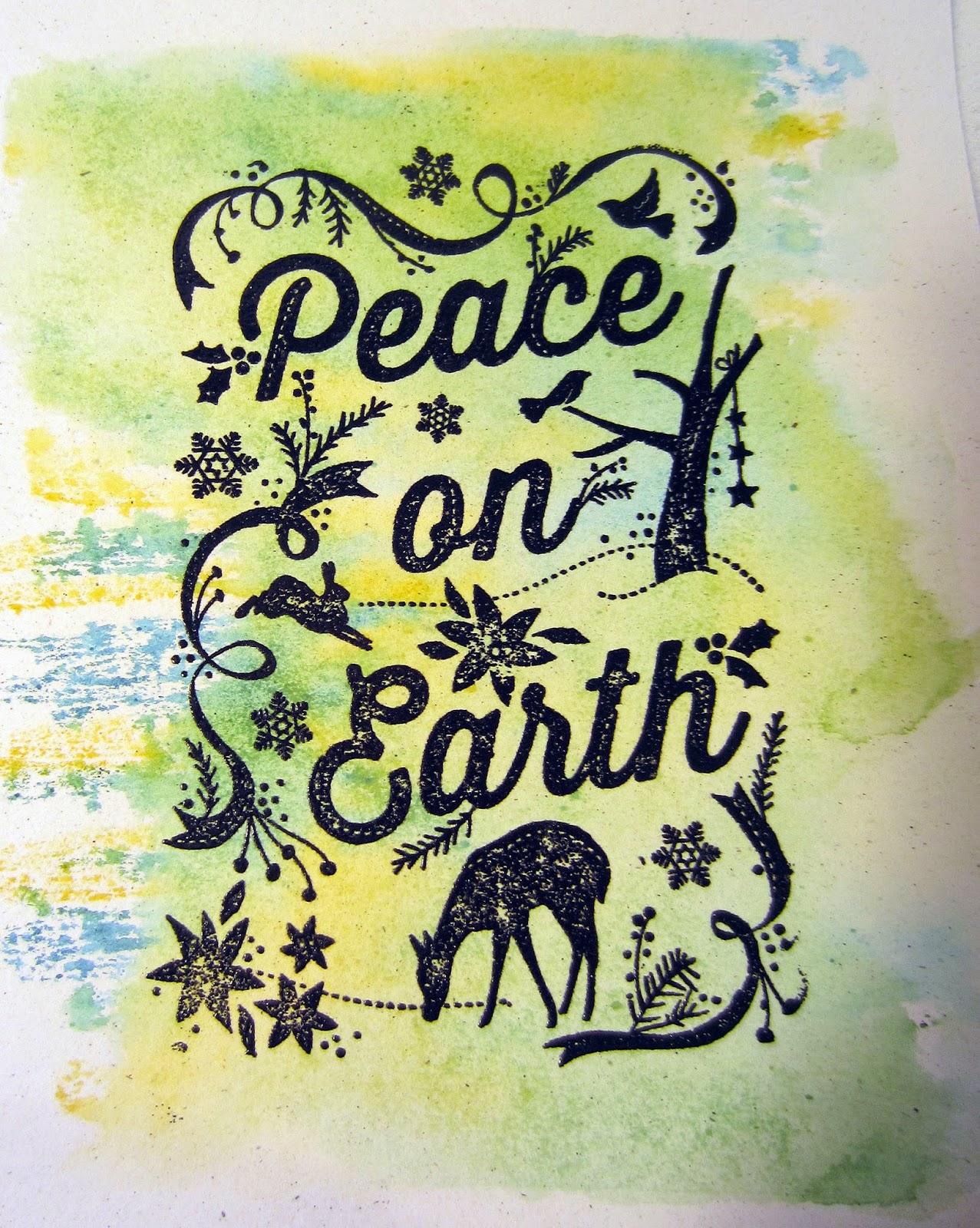 The next three cards feature the technique known as "thumping". For this technique, the stamp is inked up with a base ink, often a lighter neutral tone. Then, you "thump" the side of various colored markers over the base coat. While I don't consider the next one a "fail", and it actually IS my favorite of the three thumping  pieces, it still doesn't look the way I had anticipated. The base color on this one is Sahara Sand. 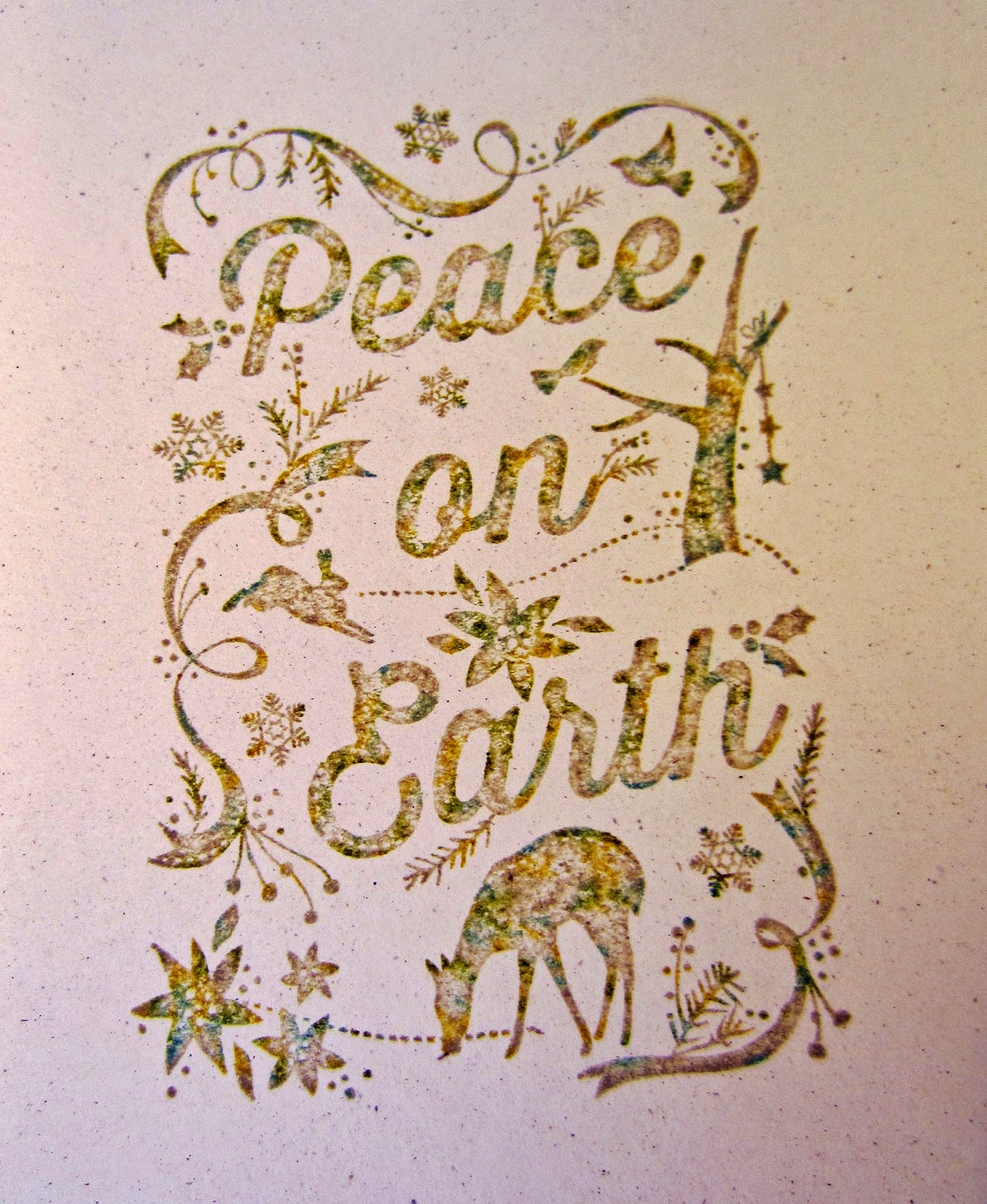 The next one looks OK, but I think my base of Soft Suede was a smidge too dark for the other colors to show up. So, it simply looks like I stamped the image in Soft Suede. 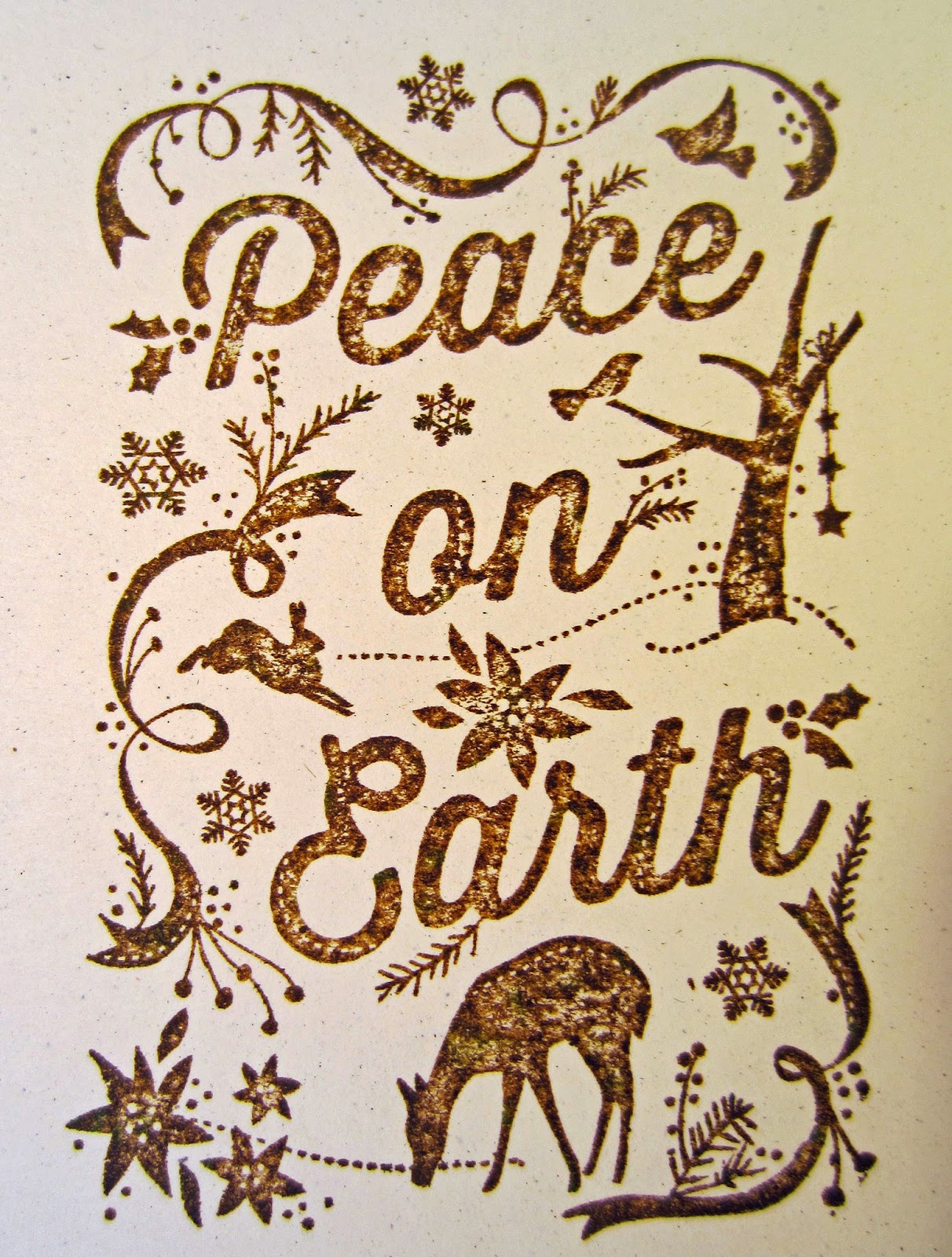 This  next thumped image taught me that the new (well, a couple of years old) hard foam ink pads do not work well with this technique. The ink is much too wet and it readily absorbs whatever colors are thumped into it. This one is in Baked Brown Sugar. Once again, it doesn't look BAD. It's just not the look I had been hoping for. 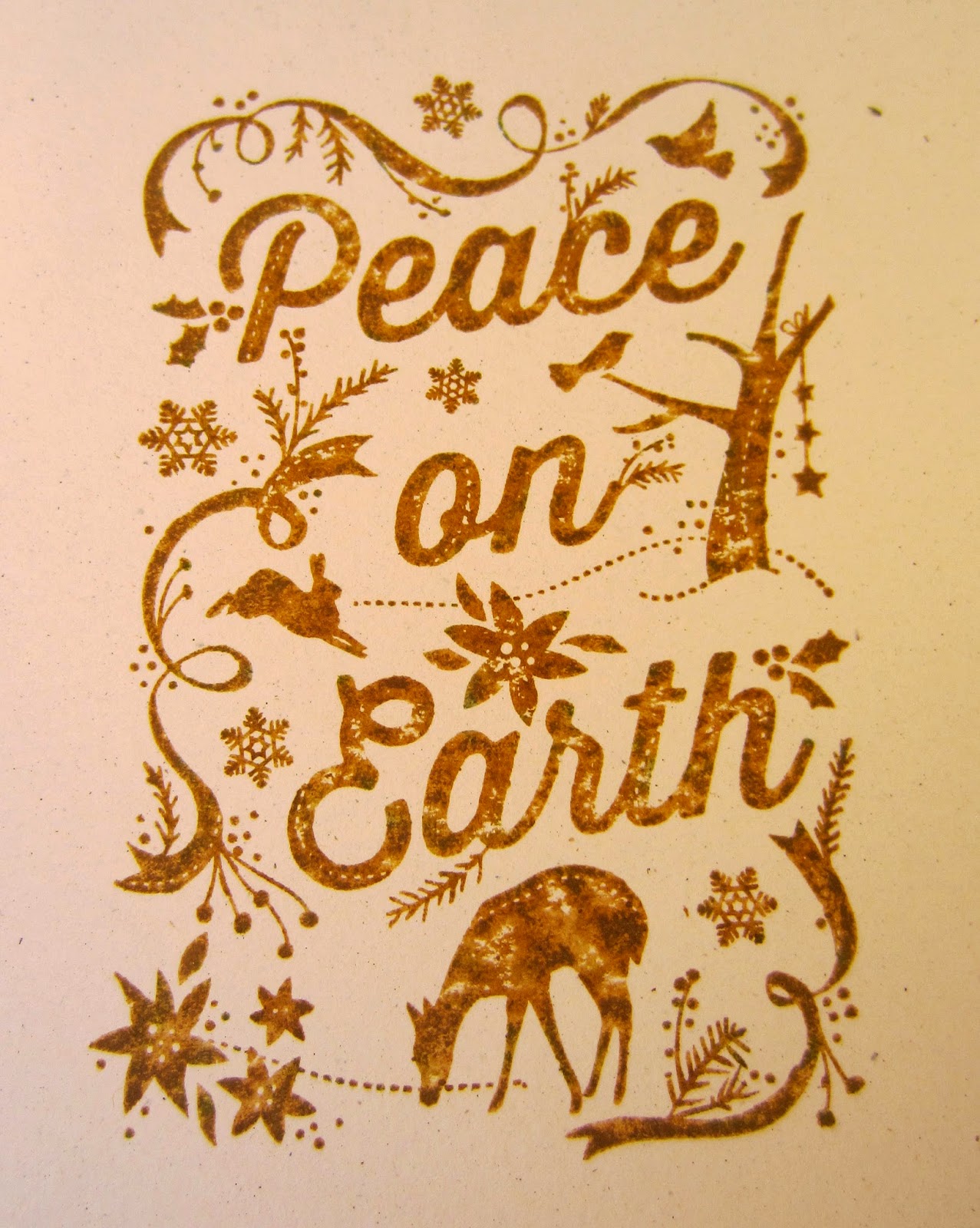 Whew! Now that I have those "fails" out of the way, I'd like to add three that I consider successes.

Although the next photo doesn't show up the colors of the sponging as concentrated as they are in real life, I like the way it turned out. This time, I embossed the image in black, and did the resist sponging in Pistachio Pudding and Pool Party once again. 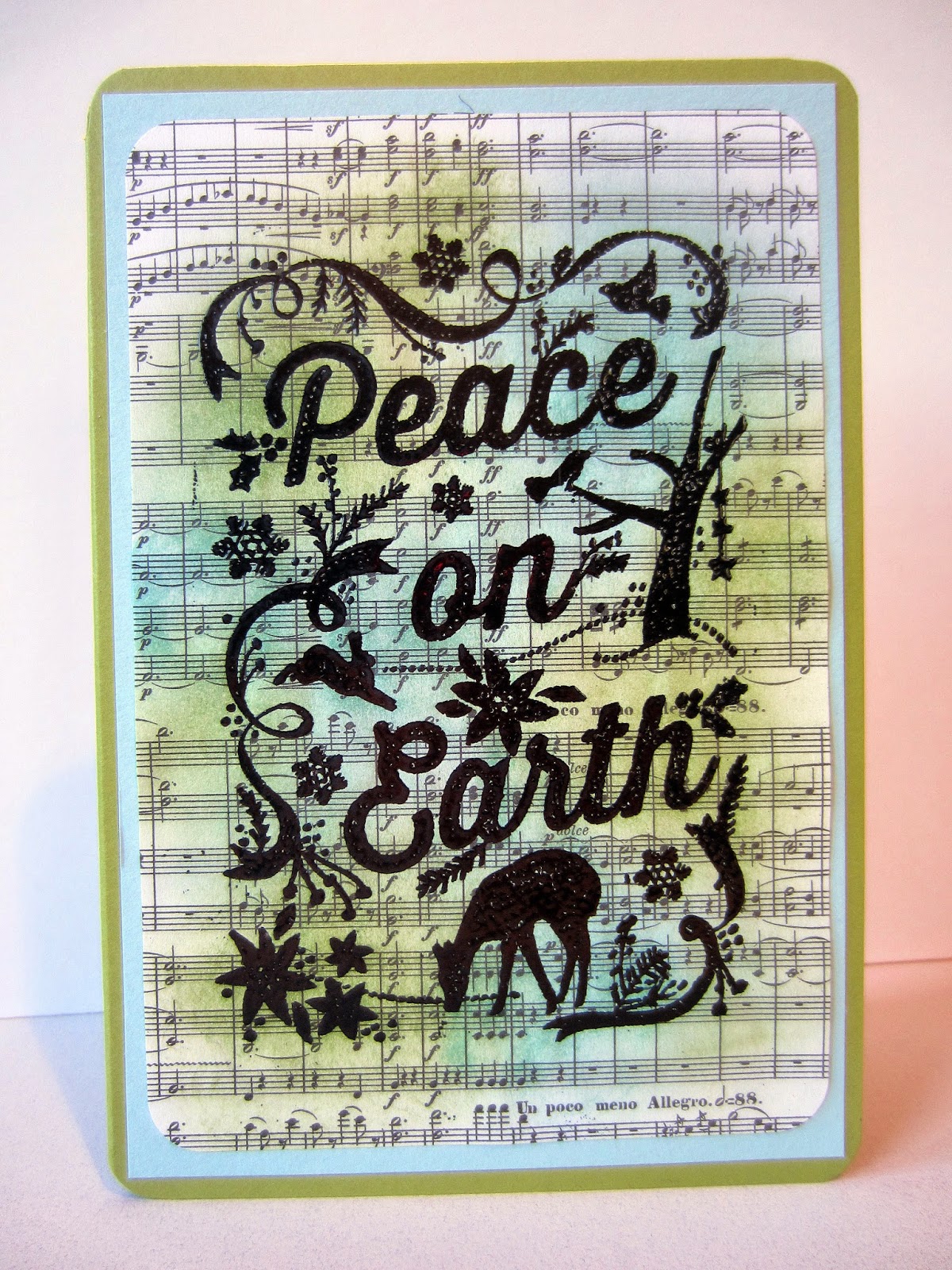 Even though I am quite disappointed at the weak color that shows in the photos, because my original is COMPLETELY covered with color, here is a little detail of the emboss resist piece stamped onto music: 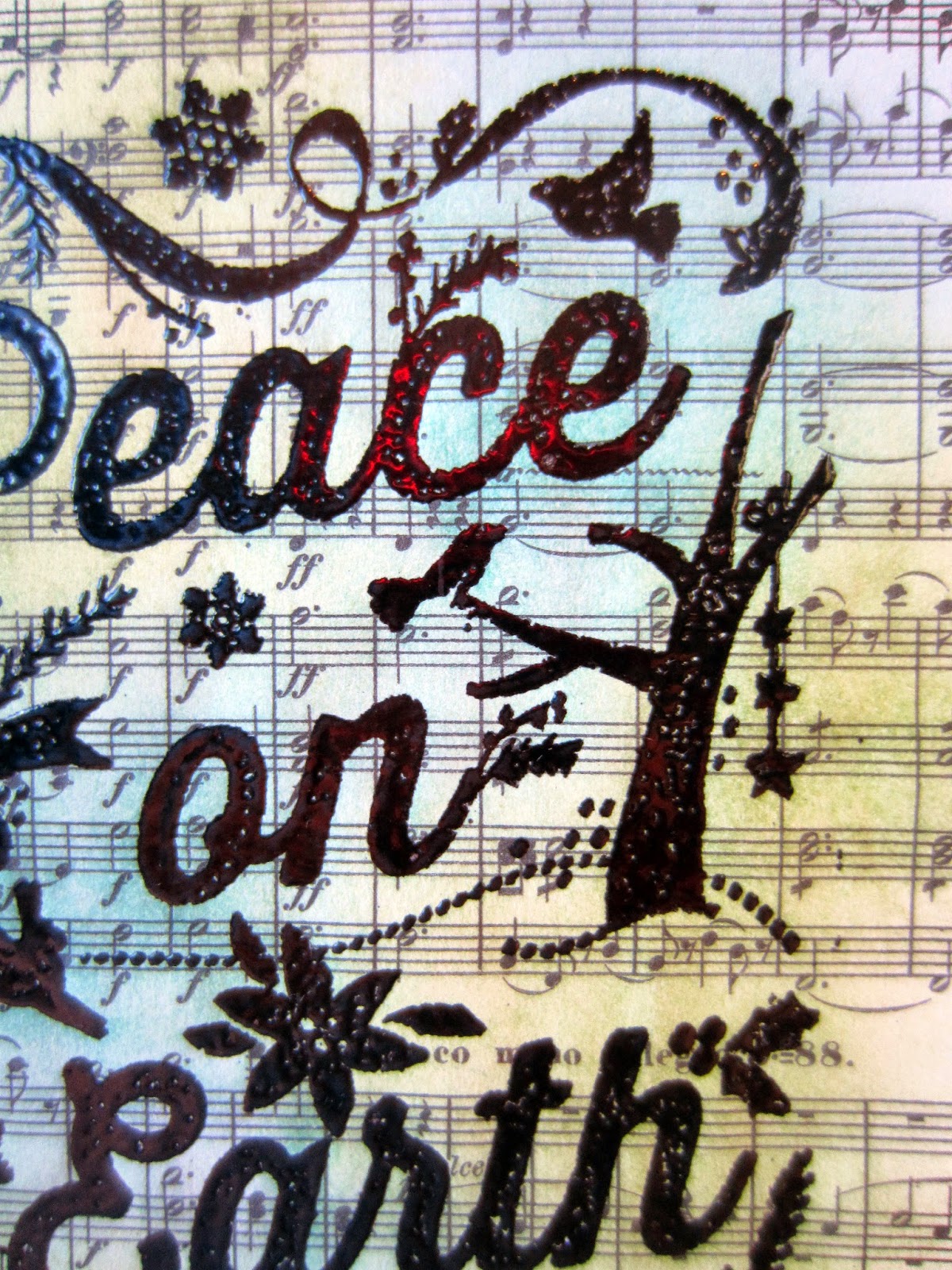 I REALLY like the way the next one turned out. Although I did have to fix one of those "happy" accidents. As I have shown you in some recent posts, this is once again the faux silk technique, using crumpled tissue paper glued to a cardstock base. Two of my examples of faux silk can be seen here: Balloons on a Mystery Background and Snowflake Flurry. This is actually the reverse side of the shoebox tissue I used on this card: Trucks and Diggers.

The "happy accident" I referred to stemmed from a placement problem. To do this technique, the image needs to be stamped on the tissue before it is crumpled, making it a bit tricky, especially an image like this, which is the entire focal point, to place it correctly on the cardstock base. I was sooo careful to get the image straight and even on the top and bottom. Once I had everything glued in place and I turned the piece over to check it out, I discovered that I wasn't careful enough with the side margins. I had way too much empty space on the left side of the card. At this point, my only option would be to start all over. No. I will make this work! I cut a quarter inch strip of embossed Soft Suede cardstock and adhered it in the empty space. There! It looks like I planned it that way!

To give the card a book-ish look, I added a little of the Thick Baker's Twin in Baked Brown Sugar and knotted it at the ends. I am very happy with this card. 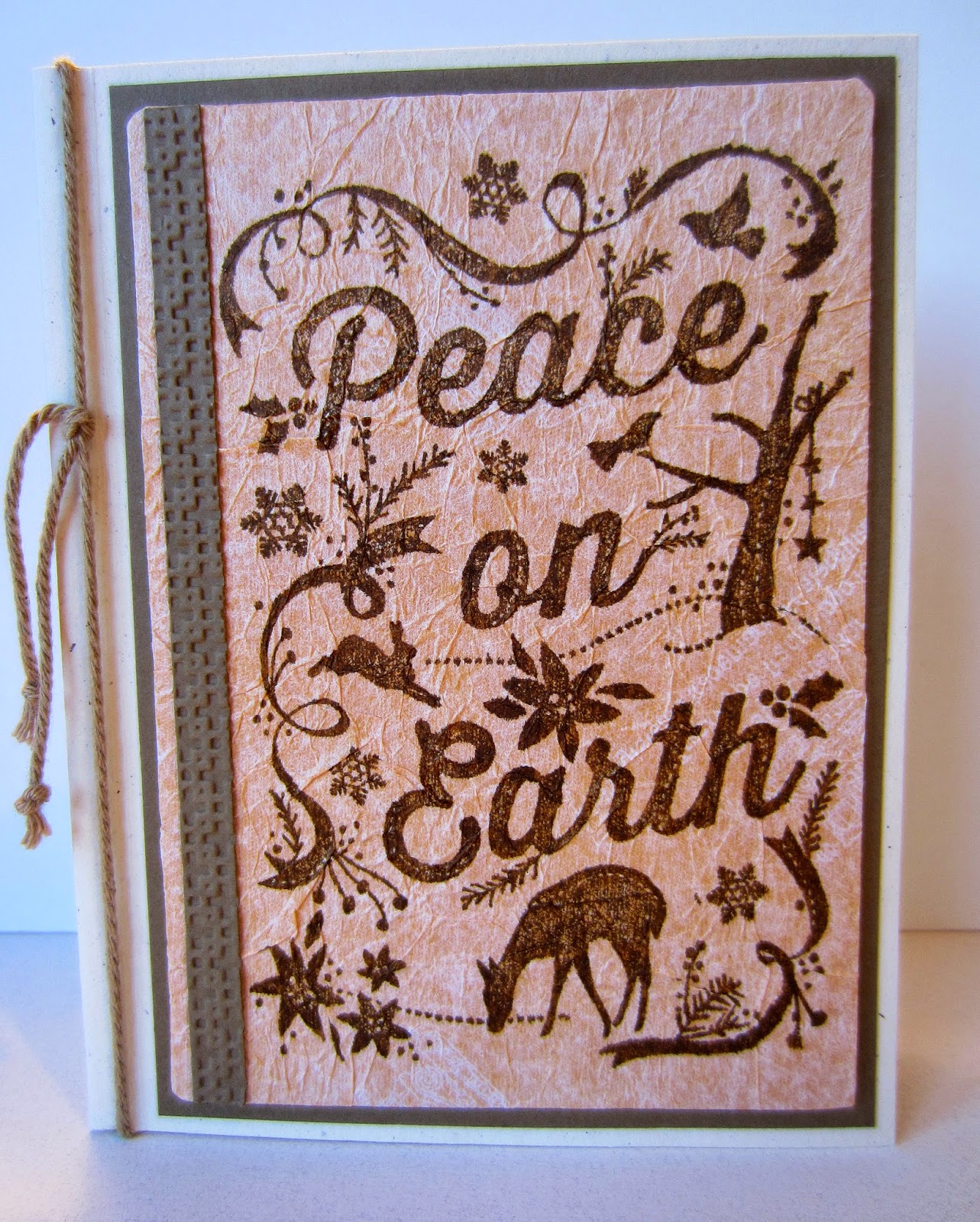 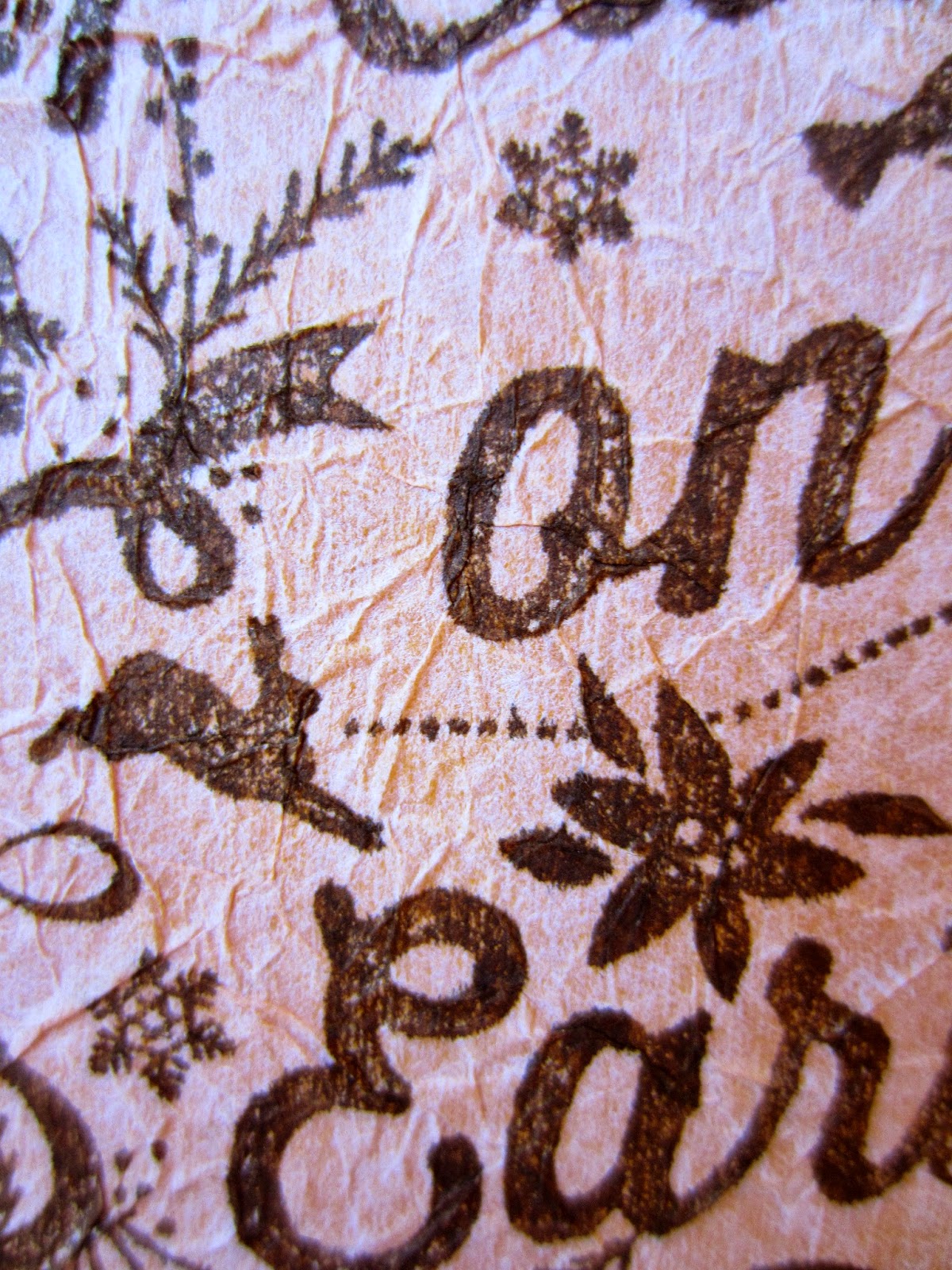 But, I think the card I like the best of my successes is the following one. It is a bit labor intensive, but I think it's worth it in the end. I randomly colored the stamp with the brush end of Stampin' Write Markers, then spritzed it lightly with water, and stamped. It looks so much like watercolor. 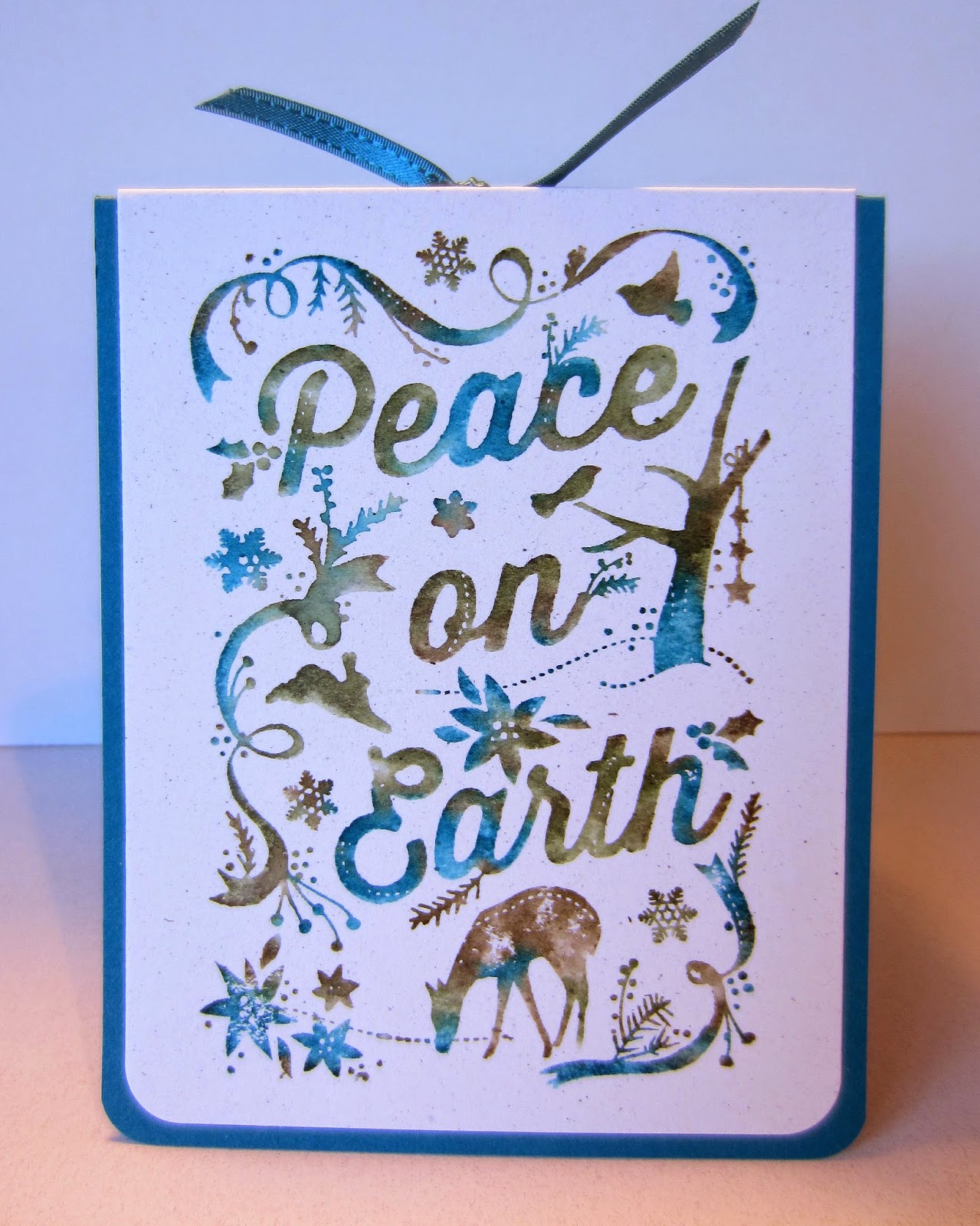 It definitely looks watercolored. Do you agree? 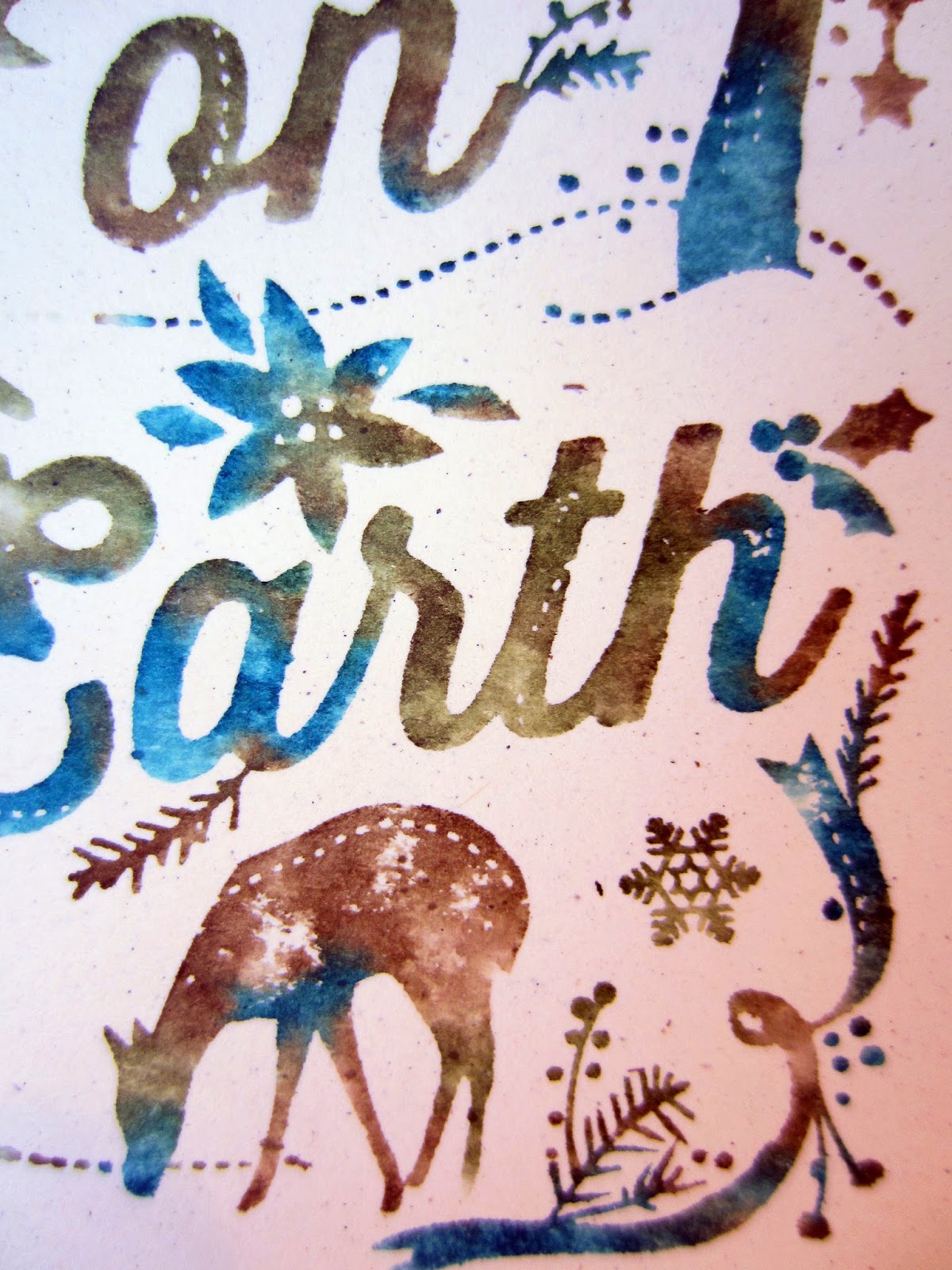 Obviously, I went ahead and created cards from the three that I considered successes. I know I am still not finished with trying out the many techniques that this stamp set is ideal for. But, for now, I am going to move on to something else.

Do you ever do anything like this? Try many different ideas to see which one(s) you prefer? Do you experience many "fails" in your creative ventures? When you make grave mistakes like I did on the faux silk piece, do you usually give up in frustration, or do you attempt to turn it around to a happy accident like I did in mine?