Last weekend, we celebrated a golden wedding anniversary with a couple who had tied the knot exactly 50 years before that day. Since JoAnn, the Mrs. part of the equation, is very special to me, I wanted to make an equally special card to commemorate their big day.

The beautiful large heart from the Bloomin' Heart Thinlits (page 194) was the PERFECT choice for a lovey-dovey anniversary card.

Cutting it from the Gold Glimmer Paper (page 175) was, of course, called for. I combined the glittery heart with other metallic gold and gold-flecked <non-Stampin' Up!> cardstock to complete the golden aspect of the card. The store at which I work is going out of business <SOB!>, so the ribbon is from some old packaging that had been stuck somewhere. It is such a sumptuous gold -- albeit a little over-sized, since the bow was premade -- that I chose to add it to my creation. 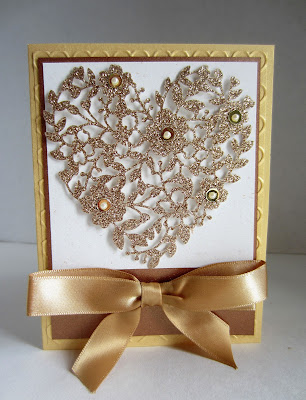 In the photo below, you can see that I popped the heart up from the surface with a few well-placed Stampin' Dimensionals (behind the big flowers). I wanted something shimmery in the centers of those big flowers, but nothing too ostentatious so as to take away from the glittery flowers, so I punched 1/4" circles from gold metallic paper and added them to the centers with glue dots. Basic Pearls served as the finishing touches for the circles.

I should point out the embossed edge of the card. Nice scallop, right? Not really. You see, the neat scallop was the result of evolution. Evolution, you ask?

My intent was to have this base gold piece embossed with the Happy Heart embossing folder. Which I did. However, given the size of the diecut heart,, I needed my layers underneath it to be of a certain size. By the time I covered my embossed piece with these additional layers, all that showed of my embossing was a sort of neat scalloped edge. Which did not bother me in the least. I'd liked the idea of following through with more hearts. But, the result, to me, is just as pleasing. 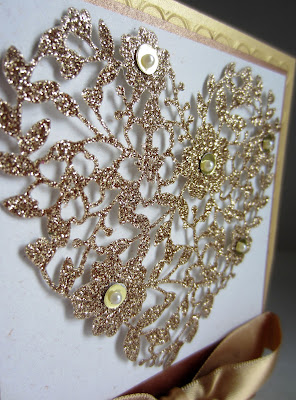