Last year, shortly before Christmas, two of us went to our County Jail to help inmates make Christmas cards to be sent to their loved ones. That occasion was the first time we had ever undertaken such an outreach project. Lori, the facilitator, was present simply as another body. This was really my project. And I have to admit that just thinking about it made me a nervous wreck.

However, after we had concluded our two hours with about 20 male inmates, I had to admit that it was a good, satisfying project to have done.

This year when I was asked, I agreed without hesitation. You see, now I was a pro. And this didn't bother me in the least.

Last year, I had had very little time to prepare (and be nervous!), so I was forced to utilize supplies that I'd already had in my stash. This year, however, I had ample time to get ready (and fret -- nah. I was OK.) So, I worked on it a little bit each day for about a week, and was prepared way ahead of time.

Being that we were taking these projects into a jail system, we were very limited as to what we could bring along. I'd had the idea of die cutting numerous snowflakes for them to incorporate into their cards. You know how when you diecut something intricate, so many of the little pieces stay in place (if you don't use the brush and pad system to remove them). So, I had the brainy idea of having the guys use toothpicks to poke out all those teeny pieces. I thought it would be somewhat time-consuming and keep them busy awhile longer. But, I was told that toothpicks could not be brought into the jail.

I spent hours doing all the prep work for these simple cards that unexperienced papercrafters wouldn't have any trouble putting together.

For these more serious red and green cards, I went to the Dollar Tree and purchased two packs of Christmas cards that I thought would work well for my project. I proceeded to fussy cut all the ornaments and trees. Then, from another portion of the cards, I punched snowflakes into circles. The polka dot strip across the bottom was another part of the cards that I merely cut to size. The rest of the supplies came from my existing stash. 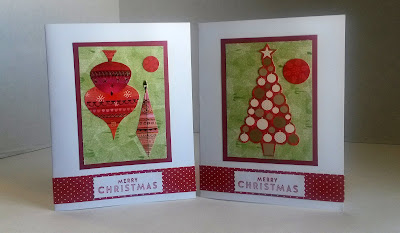 What I ended up doing for the turquoise cards was purchase two packs of cute holiday-printed cardstock at Michael's. I then utilized almost entire sheets, by punching and punching and punching. The greetings across the bottom of the card were from a sheet from the second pack. It was a sheet of rows and rows of holiday phrases. I used my papercutter to slice these all to size. 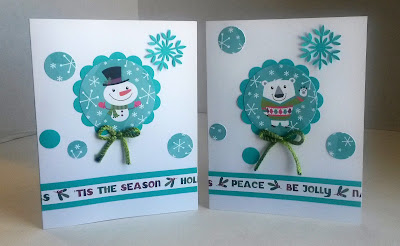 I put all the individual supplies into separate plastic bags so they'd be easy to distribute when I got to the jail. I kept the two cards as separate projects, so they worked on only one design at a time. Since I had done all the prep work, that didn't leave a whole lot for the guys to do themselves. But, I gave them choices to make and told them that, even though I had sample cards for them to look at, it was only an idea of what it could look like using the supplies I gave them, that they were to feel free to make them completely their own.

Few of the cards looked like my examples. They truly did make them reflect their own personalities and tastes. In fact, many of the guys combined components from each of the cards together on one card. I was proud of the care they took in their creating for the most part. I did a lot of running around, redistributing wayward supplies. but the only real help I offered them was to a few who needed help tying their bows.

The guys were all very well-behaved and I heard "thank you" many times. Some even shook our hands as they left the room one by one. It was a gratifying experience that I hope to be offered next year again.