EMBRACE YOUR OWN DRUMMER

In this post, I encourage you to be true to yourself. If you're not true to who you are, how can you be true to anyone else? Even Shakespeare, in all of his evergreen wisdom, had something to say about this in Act 1, Scene III of Hamlet: "This above all: to thine own self be true."

A beautiful post on Rosemary's Blog, expounds on the need not only for individuality, but for tolerance. Something our world seems to be sorely lacking these days. She cites Thoreau's famous quote about marching to the beat of a different drummer.

Here I will focus on individuality and listening to your own inner drummer. On a level not quite as lofty as tolerance, I refer to being your own self even in something as simple as cardmaking.

Many people are only comfortable in the act of cardmaking when they can directly C.A.S.E., which is an acronym for Copy And Share Everything. The precise meaning of this would be to remake the project exactly as given in an example. That's fine. Everyone has their own comfort zone. But I'm saying that sometimes, even though it is UNcomfortable to step outside this zone, it is important to stretch your wings somewhat. Take that leap of faith and create something that is maybe inspired by something already done, but is essentially YOUR OWN! What a great feeling, eh?

Take the case of the Designer Tin of Cards Project Kit (page 160 of the big Stampin' Up! catalog). I ordered the kit back in October when it was on special for World Cardmaking Day.

One of the cards featured a wondrously beautiful background on the card base. However, the sample showed this beautiful pattern almost completely covered up. The pattern I am referring to can be seen in the teeny tiny left-hand portion of the card below: 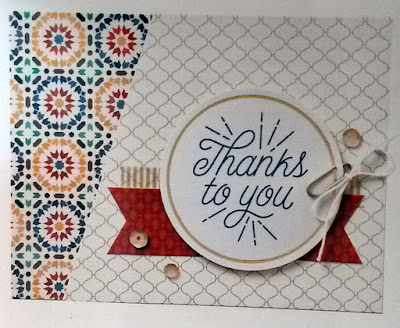 Sure, it would be incredibly easy to simply slap the card together as shown in the sample and explained in the instructions. That would  be a case of C.A.S.E.ing.

In all good conscience, I could NOT cover up that exquisite design. So I listened to my own inner drummer and came up with this: 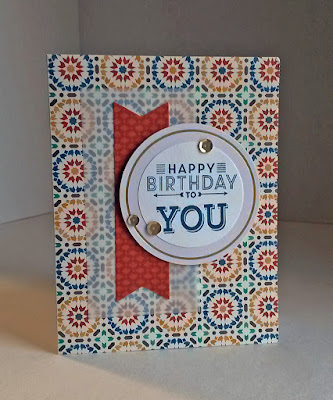 Using many of the kit's components, but just in another way, I feel ever so much better about my final result. Do you know why? It suits my personality much more effectively -- and I got to rescue that beautiful paper and show it off! 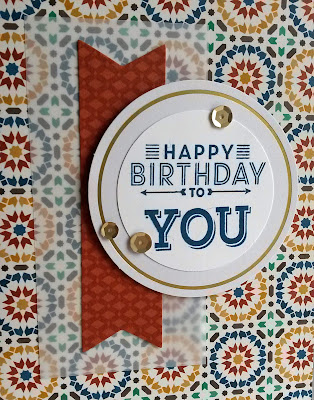 So always always, even in something as unimportant and mundane as cardmaking (did I really just say that??!?), be true to yourself. Respect what is inside of you and embrace it. Be the best you you can possibly be.