Well, here we are in Week 2 of my personally set Christmas Challenge, in which I randomly pluck one of my many Christmas sets and make a card from at least one of the components in the set.

This first card was a STRUGGLE. I'm still not thrilled with it, but it will have to do. I spent enough time on it. I was going for a truly old-fashioned look. Hmmm.

Nothing too special about this finished card, except maybe that the stamped frame portion has been fussy cut. 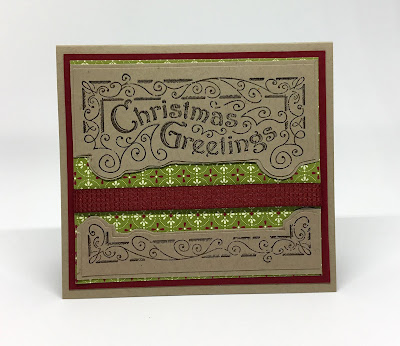 I had so recently chosen the other case that belong in this set of stars, so I wasn't ready to be terribly creative with yet another star.

Although it certainly doesn't show up in the photo, the star and the little sentiment are embossed with a glittery gold embossing powder. It is so sparkly and elegant in real life; in the photo it unfortunately looks fairly ordinary.

Since the star itself was so beautiful, I set it against a simple starry Designer Series Paper in white and Cherry Cobbler.

This card is an interesting size: 4 1/2" x 4 1/2". I trimmed it down from what I'd originally intended to complement the size and importance of the star a bit better. 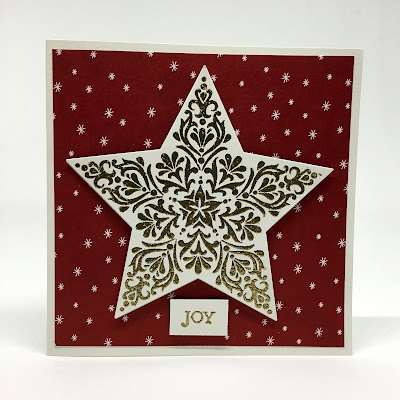 This next card stumped me a little. I love this stamp of a row of winter-y trees. So stark. So Wisconsin winter.

I was going for a moody winter's day. To accomplish this, I used a piece of gray/blue cardstock that is retired. It was the perfect color. I stamped the trees and the greeting in Gray Granite ink and mounted the piece onto the same gray cardstock.

It was a little too somber looking at this point. To alleviate that and make it a tad more joyful, I took Two-Way Glue (remember that stuff??0 and gracefully streaked it across the entire tree image. I then covered the glue-y lines with Dazzling Diamonds Glitter. I was trying to convey the cold briskness of a winter wind. 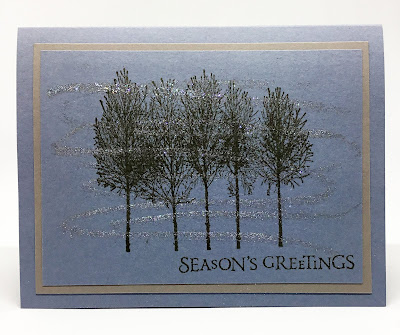 I have always loved this darling deer silhouette stamp. I embossed him in copper and mounted him upon a piece of cream cardstock that I'd die cut with the largest oval from the Stitched Shapes Framelits.

To be weird, I guess, I decided to mount the oval onto a deer-laden DSP background. At first, it bothered me that I was working with a cream color in my card, and the deer in the DSP were an obvious white. However, I love the contrast this provides in the finished card.

When I received my Paper Pumpkin kit this week, I put it together immediately. (What a great kit!) There were a few leftovers in the box, and I used some of them on my card. The leftovers included the diecut pine bows and the cool Cherry Cobbler trim I tied into a bow, Thanks, Paper Pumpkin! They were an awesome addition to my card! 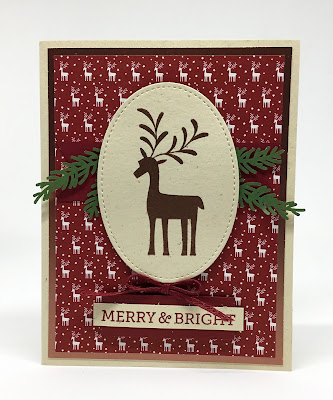 In the following card, I was trying to go for an Americana homespun look.

The ornate ornaments were stamped on Whisper White in Blueberry Bushel ink and then fussy cut. I'd thought I had dies to cut them, but I guess not. So my Paper Snips and I did our work together.

The pine branches were die cut using the Pretty Pines Thinlits, found on page 219 of the Annual Catalog. I used Dimensionals to pop the ornaments up on the branches.

A little red and white baker's twine tied in bows at the tops of the ornaments adds to the homespun look. But I think it's the red and white gingham check Designer Series Paper I chose for my background that clinches the old-time-y look. 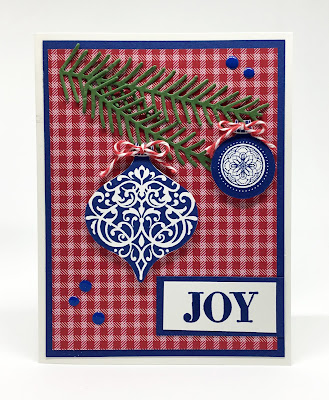 I had a blast with this next card! It incorporates a bit of masking in order for the tree to appear to be behind the short round snowman. Easy to do.

The scene was colored with Stampin' Blends. So much fun to color!

I know it doesn't show up in the photo, but if you notice the dots in the background, well, they are drops of glitter to go along with the pastel turquoise sequins and the white snowflakes. But, they just show up as dots. That's OK. It's snow.

These snowmen and their bird friends are so adorable, and are always a pleasure to work with. I wish they were still current. 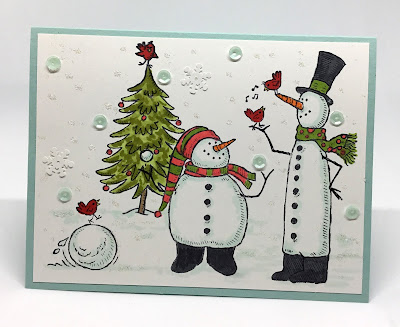 This is another card that I struggled with. I knew that I wanted to use the stamp with the sentiment from this set, but it, by itself, was not enough, unless I wanted to make a tiny square card.

Before I even started stamping, I dug out this DSP for my background. I did it in this order so I could match my ink colors to the colors in the DSP. When I did ink up the sentiment stamp, I inked the entire thing in the lighter green, but used a Stampin' Write Marker to color over the light green to highlight the "merry" and the "Christmas". This was mounted on two layered squares cut with the Stitched Shapes Framelits.

After lots of hesitation, I grabbed another of the stamps from this set, the image of Christmas bells. I also inked this stamp up in the lighter green, then came at it with a few other colors of Stampin' Write Markers to pull in the colors of the background. I fussy cut the bells and adhered them to two smaller squares, but in the same colors as the previous ones, to provide a bit of contrast, at least, in size.

I didn't want to mount the squares right against the busy DSP. So I added a strip of Whisper White, cut into banner points, to the center of the card front. Before gluing this in place, however, I added strips of sparkly silver and white ribbon. I then popped up the squares, one on top of the other, with Dimensionals.

Still not happy with the card, I then added a couple Basic Rhinestones to echo the sparkle in the ribbon. And called it done. 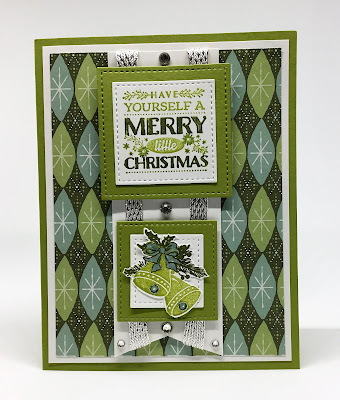 Disappointingly today I randomly grabbed another snowflake set. That's what you get with random; not always what you want. But, that's part of the challenge.

Usually I am drawn to emboss resist when doing snowflake images. Since I'd already done that, and not too long ago, I decided to sponge a 4" x 5 1/4" piece of Whisper White cardstock in five different blue inks.

I was groping for a different sort of color in which to stamp my big snowflakes against the stormy blue sky, and opted for Tranquil Tide. Snowflakes aren't green, so I felt that was certainly different.

A simple card, it was finished off with appropriately sized Basic Rhinestones in the centers of each of the snowflakes. 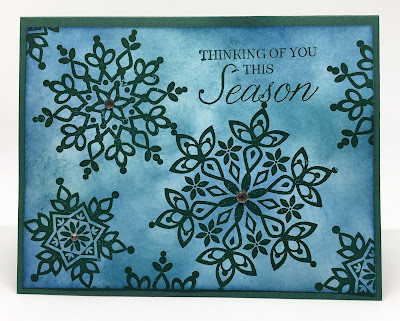 Two weeks of my Christmas Challenge down. I hope I'm not boring you with my results. It is so therapeutic for me -- something that is desperately needed during this busy season.

Please let me know if you have any questions about these cards. I'd love to be able to help you out any way I can!