Any of you who have been reading my blog for awhile knows that one of my favorite papercrafting activities to do is fussy cutting. A prime example of my fussy cutting expertise includes the roses and leaves on this card: 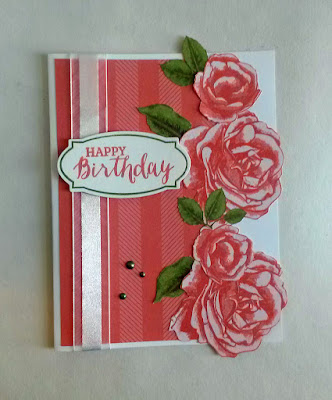 When I discovered that our world famous museum, the Leigh Yawkey Woodson Art Museum, was hosting an exhibit of lots of fussy cutting from March 2 - June 2, I was so excited and could not wait to check the exhibit out.

However, being in Central Wisconsin, we STILL haven't gotten any spring weather. And decent weather was imperative because when I went to the exhibit, I wanted to pair it with photos in the Sculpture Garden. Mother Nature just did not care that I wanted to do this.

I kept telling myself that the exhibit would be there into June, thinking WELL into June. However, I noticed the other day that it wasn't being held as much into June as I'd thought -- and hoped. The last day is SUNDAY. Looking ahead to the weather, today was the only day until then that rain wasn't forecast.

So, today I finally went to the exhibit, after first taking a few photos in the Sculpture Garden. 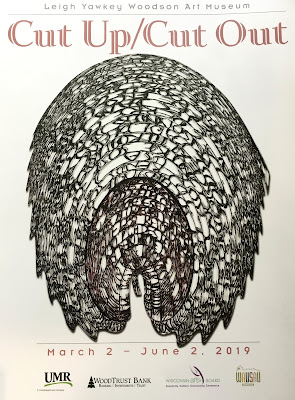 Once inside, I was completely enchanted and caught up in the magic of Cut Up/Cut Out. Although I was there primarily to check out the paper cutting, I loved some of the other media that were used for creating also.

Following I have included a selection of photos of some of the more intriguing pieces I discovered. There were so many that, since I was worried about overwhelming you with photos, I chose only a sampling. 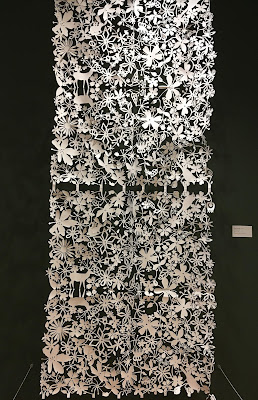 A close-up of the previous piece: 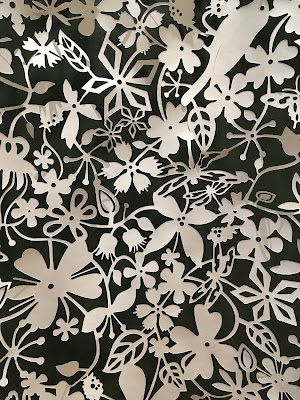 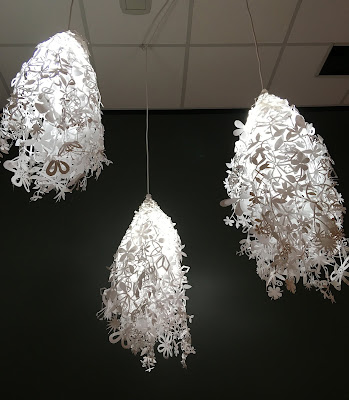 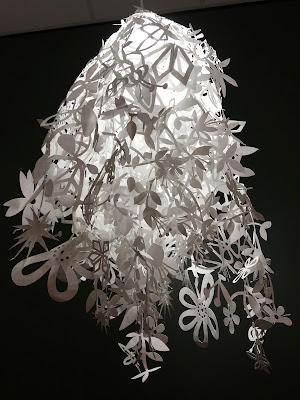 The next is not a great photo because it was encased within a cube.
But the movement and grace of the piece,
as well as the resulting shadows, were exquisite. 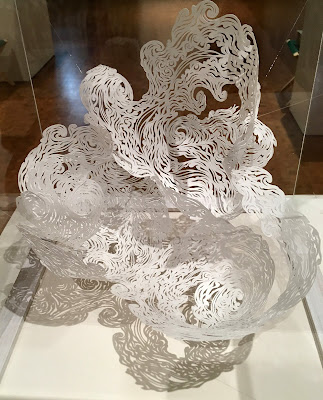 I'm sad at how this close-up photo turned out. It looks so flat compared to reality.
The portion with the hole was deep, consisting of several layers of paper.
Very impressive. 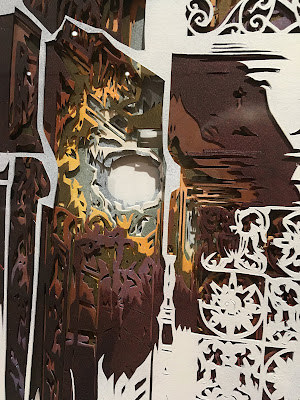 This three dimensional piece was so interesting to look at: 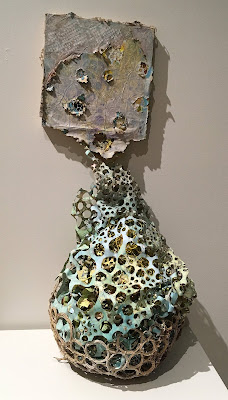 A weird old lady stood in front of a huge piece and photo bombed my picture.
(It's actually me in a selfie. What a dork, huh?) 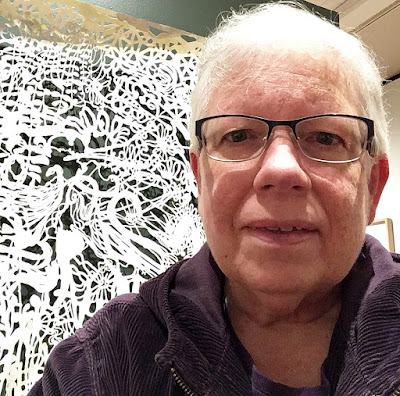 A closer look at the piece that my body was covering up:
And this thing was HUGE! Imagine the amount of time this must have taken to cut! 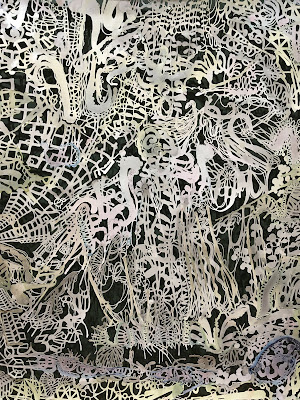 Leaf cutting at its best:
I bet this leaf had no idea it would end up in a museum! 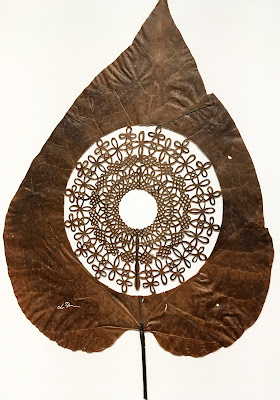 Another truly impressive example of paper cutting, you can read the words easily: 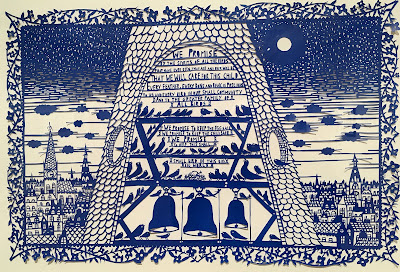 This interesting piece was a cut-up map: 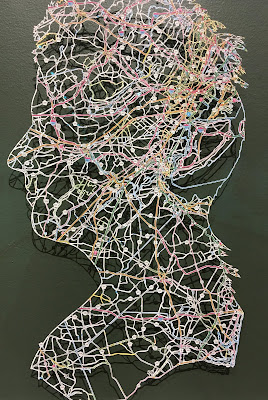 The fine intricacy of this next piece almost made me cry: 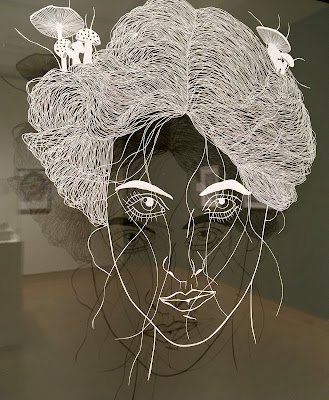 An example of laser cut wood: 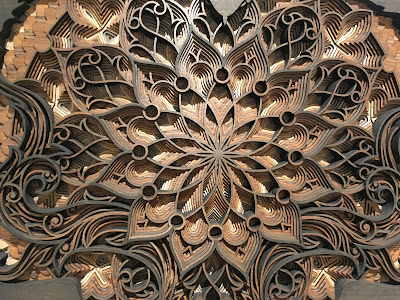 As a former Scherenschnitte cutting lover, I was especially intrigued by this piece.
A  fairly decent size, about 16" x 20" or maybe even larger,
it was cut from black paper and has an unbelievable amount of detail. 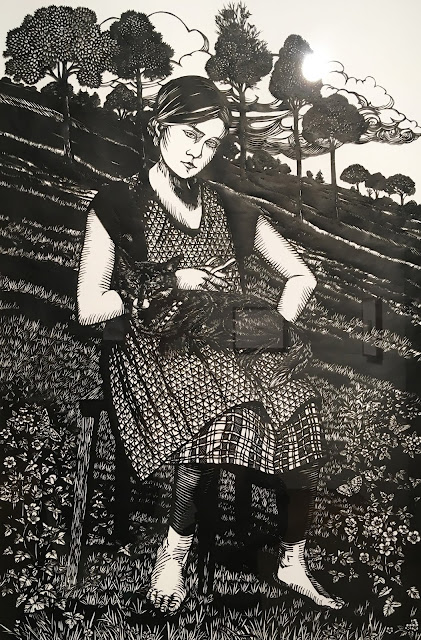 A closer up look at a portion of the previous work of art: 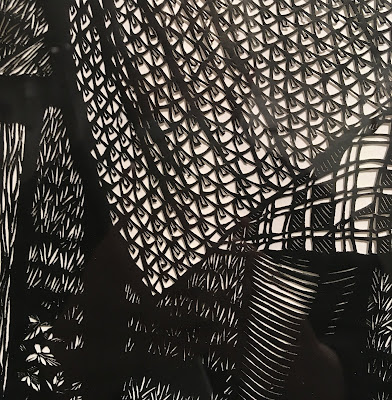 An artist who was raised in our area, and who considers the Woodson Art Museum
his "First Museum, cuts up thousands of pieces of U.S. paper currency to
create his interesting collage pieces.
Shown below is an example that was included in this exhibit: 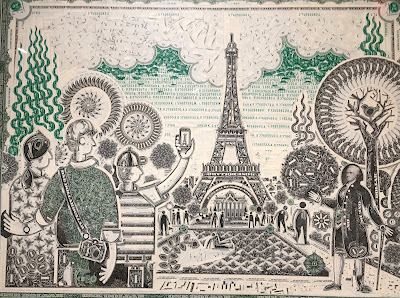 James Allen of Portland, Oregon, is the creator of the final piece in my post.
In the signage accompanying the work, it notes
"James Allen creates book excavations --
sculptures formed by cutting away a book's pages to reveal its interior forms.
He doesn't add content to the original format; he leaves the pages bound,
simply cutting away pieces." 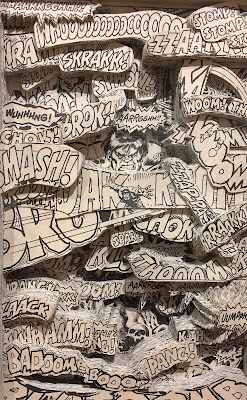 This exhibit was all -- and more -- that I hoped it would be. I am so glad I got to see it before it's gone forever!

As I stated previously, the Leigh Yawkey Art Museum is world renowned, most specifically for their annual fall Birds in Art exhibit. This is the link to their website. Please check them out! You won't be sorry.