Being a huge fan of Stampin' Blends, cute stuff, CROWDS of cute stuff, Christmas, happy, snowmen and other Christmas characters, on and on and on, it was a given that I would be immediately drawn to one of the new stamp sets that will be available for order by the public on September 4.

Christmas Crowd, found on page 10 of the Creativity is Calling catalog, fits the bill perfectly. I could hardly wait to get it in my greedy little hands. The day it arrived, I trotted down to my Creation Station to do some coloring.

I stamped the image twice in Memento Tuxedo Black ink onto Whisper White cardstock because I wanted to color in two copies right away.

For my first card, below, I did no blending whatsoever, although I did add dots and stripes here and there. It took awhile to color it to my satisfaction. But, once I was done, I'd thought that if I did the coloring at my leisure, I would be able to put together quick and easy cards. To do so, I simply cut the image to size (3 1/2" x 4 3/4"), mounted it on an old piece of striped DSP, and finally onto a Whisper White card base. Quick and easy once the coloring is done.

You'll notice the little guy on the far right? I wasn't sure what type of animal he was, so I made him into a squirrel by using my two shades of Smoky Slate Stampin' Blends. Stay tuned for more on this character. 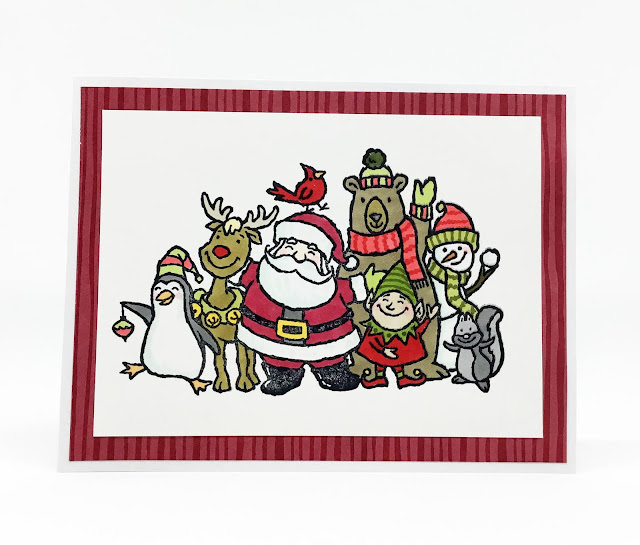 A little close-up of the coloring I did: 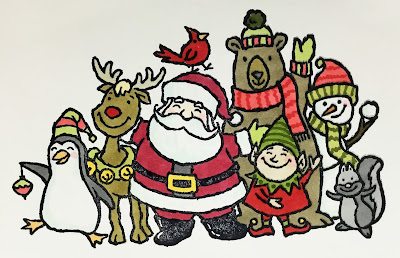 Actually, after I finished that card, life got in the way of me coloring the second image.

But, finally the other day, I worked on it. As I was coloring, I decided to hold off on finishing it completely. You see, I had colored in my first penguin using the dark Smoky Slate, and I thought he should be a true black. Also, remember the guy on the far right? I had finally decided to make him into a skunk (although skunks aren't too Christmas-y, are they?) Unfortunately, I had ordered the two Basic Black Stampin' Blends, so I needed to wait until my new Blends arrived to finish these two cuties.

My blacks finally arrived, so I was able to finish the coloring. As you can see, I did quite a lot of blending in this image. I even added some subtle pink cheeks to a few of the characters.

I wanted to do something a little bit different with this colored image than I'd done with the first one.

First, I held a die in place, fully intending to cut it into an oval shape. I don't have the Layering Ovals dies set. If I did, I might have gone that route anyway. As it was, the largest oval I had was from a retired set and it cut off part of the ornament the penguin was holding, as well as a bit of my skunk. Not really happy about losing part of my precious image, I spent a bit of time staring at it.

So that's exactly what I did. I have bad arthritis in my hands, so fussy cutting such a FUSSY image stamped on Whisper White cardstock was sort of tough on my hands. Notice that I cut even into the smallest spots if the space allowed it: between the reindeer's legs, his and Santa's leg, between the heads of Santa and the deer, etc. As you can imagine, this was time consuming. But, when I was finished, I felt, oh, so satisfied.

Another thing I'd done differently on this one compared to the first image was that the only red and green shades I used on the second one were the two Poppy Parades and the two Granny Apple Greens. I love their liveliness.

That said, I decided to use Granny Apple Green as my backdrop for the card I was going to put together. I didn't want a flat surface, but I also didn't want it too busy so as to detract from the busyness of the image itself. So, I opted to run it through the Big Shot inside the Subtles 3D embossing folder (page 199 of the Annual Catalog). Cut at 3 5/8" x 4 7/8", I adhered the embossed piece to a 4" x 5 1/4" piece of black cardstock. Even though it is difficult to see in the photograph, it also is mounted on a Whisper White card base. 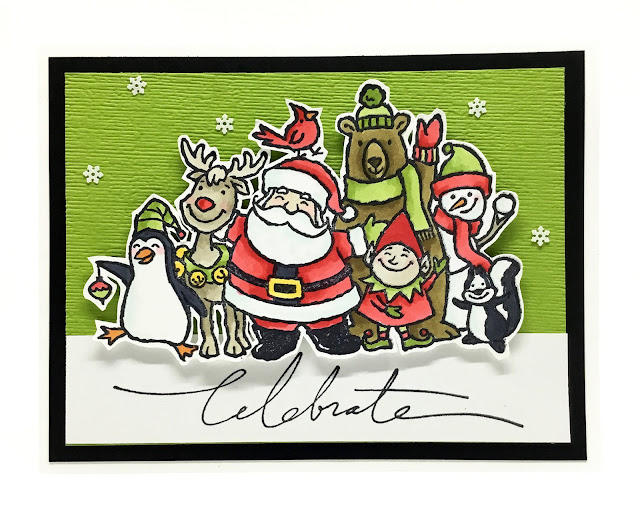 A close-up of the coloring of the second image: 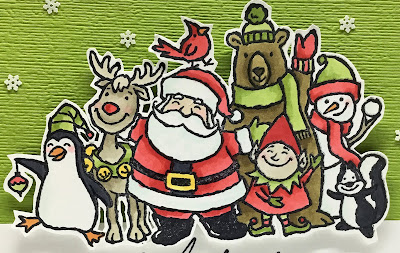 Holding the fussy cut piece flat against the embossed green was not at all appealing. To alleviate that sensitive situation, I cut a piece of Whisper White cardstock to measure 1" x 4 7/8" and mounted that flush to the bottom of the green piece. Oh, before I mounted it, I grabbed a really old stamp and added "Celebrate" to the strip in black ink.

Once the sentiment was in place, I popped up with lots of Dimensionals my happy image so it overlaps the white, giving it the look of them standing on snow.

Although I already loved it at this point, I thought the green "sky" needed a little extra oomph. I remembered another precious item I'd preordered from the Holiday catalog, the product Stampin' Up! calls Snowflake Sequins on page 43. A wondrous mix of stars, snowflakes, dots and sequins in white, iridescent and silver, I fell in love with the tiny snowflakes, the real reason I ordered these. So, to finish off the green background, I glued five of the adorable snowflakes in place. 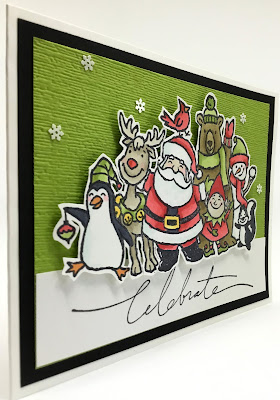 If it wasn't so very time consuming -- and hard on my hands -- I would make a whole bunch of these cards. Do you like the way it turned out? 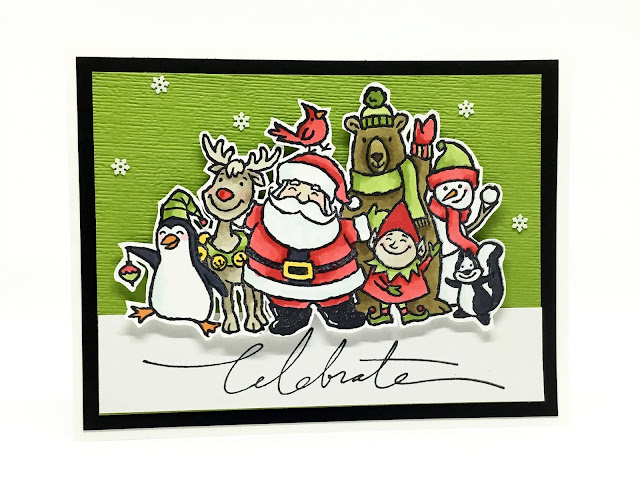 As I was writing this post, I noticed something about this image. Something that would make it even cuter, if that's possible, and add even more dimension. However, this means much more work for me. But, I can't resist. I will just take it slowly and make a card using my "new" idea. Stay tuned in the next couple of weeks to see my result!

How are you doing on your Holiday card making?