I made four ornaments today! A little struggling, but so much fun -- and I love the looks of these little gems. Measuring just 1 1/2" square when they are closed, these tiny guys definitely are little treasures.

Several years ago, I'd made one of these ornaments. I can't find it right now. But, ever since then, I'd been wanting to make another one . . . or four. Seeing a post on Dawn Olchefske's blog prompted me to finally do so. Dawn, a fellow Stampin' Up! demonstrator, often features projects on her blog that I fall in love with.

Following Dawn's video, I once again learned how to make these cute ornaments. Since she does such a good job on her instructions, I won't talk about how to create them. I will, however, share some little things that I experienced that might help you when you try your hand at them.

Either I missed this in Dawn's video, or it wasn't said, but, to make the Folded Star Ornaments in this size, you need five 3" x 3" pieces of your chosen paper.

To create the neatest looking ornament, try to be as meticulous in your measuring, cutting, folding and gluing as you possibly can. It is crucial that you use a bone folder for every one of your folds. Also, Dawn uses Snail Adhesive, while I liked the ease of using the Tombow Mono Adhesive (green glue) because it gives you some wiggle room.

The first four photos show each of the ornaments I created today in the closed position. In this position, they resemble little books -- or little star books, if you will. (Now that I shared that second link with you, I am going to have to go back and make one of them. It's been years since I've made a star book.)

I discovered that if you search for "star books" on Pinterest, one of the tutorials on that first page is for the folded star ornaments. Not having looked at that site, I'm not sure how the directions would vary from Dawn's.

OK. Moving on. Following are the four I made in their closed positions. The first one pictured is the one that most closely resembles how Dawn teaches us to make them. 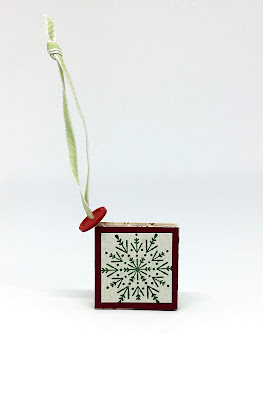 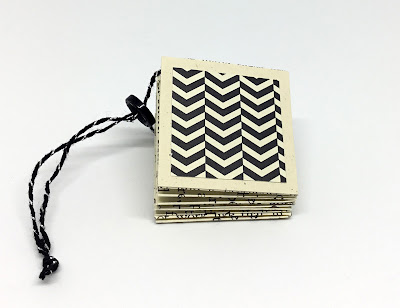 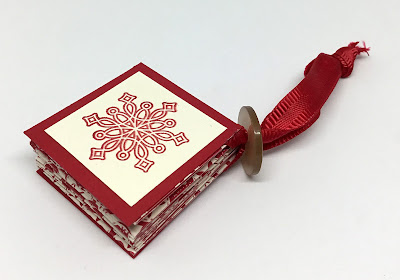 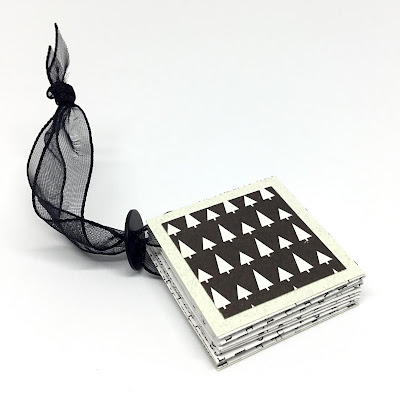 Once again, this is the first one I made, the one most like Dawn's. In this photo, I have released the button from its closed position and the ornament is ready to be opened. 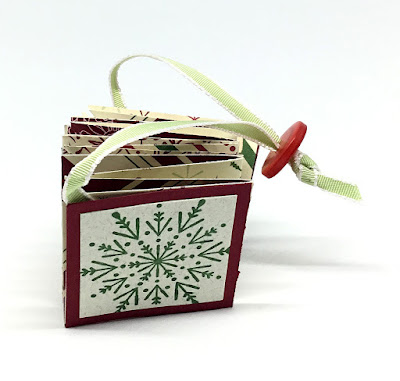 This is that same ornament in the fully opened position, but not "locked" in place. Notice where the button is. 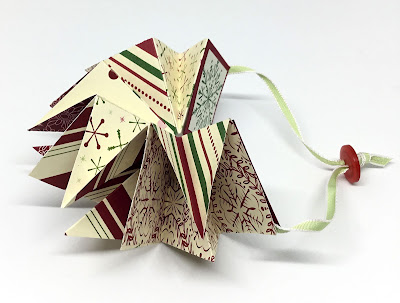 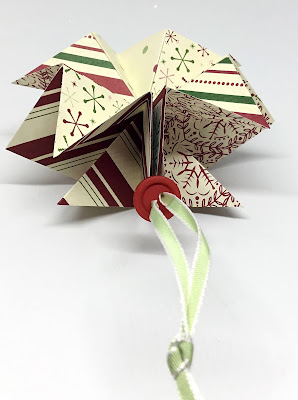 It occurred to me that maybe this type of ornament would look cute if made from old book pages. This is the second ornament I have pictured closed at the beginning of my post. Take special notice of the button. I'll talk about that more later.

I'm sure that someone smarter or more experienced than I would not have had the problems I did when using book pages. I considered it important to have the print on the pages facing the same direction when the star is opened. I finally managed it, but after several bad tries.

In Dawn's tutorial, she suggests using 1/8" wide ribbon with the button. I should have listened to her. I didn't have any thin ribbon that would go well with ecru and black, so I opted to use baker's twine. Big mistake. The twine is too thin to keep the button close to the star, whether in the open or closed position. Just a little disturbing because it seems a little sloppy.

I'm not sure if I like the look of the book pages. What are your thoughts? 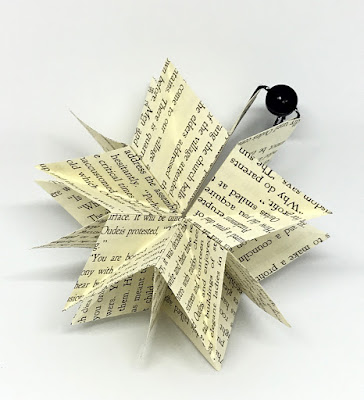 After experiencing Dawn's suggestions for using three separate prints of Designer Series Paper, I thought using one single print throughout would add a little more of a unified look. And I was right. This one is my favorite -- in that respect. I did mess up in one spot, and I'd like to help you avoid the same mishap.

I was so excited with the way this star was shaping up that I guess I got careless. I had some pretty Real Red Stampin' Up! ribbon that I thought would look so well with this ornament. Unfortunately, it measures 3/8" wide. Don't go that wide! I think if it had been a thinner ribbon or even 1/4" wide, I wouldn't have had the problems I did.

Following Dawn's instructions, I measured two lengths of the ribbon at 7 inches. It all went smoothly until it came to threading the ribbon through the holes of the button. What a nightmare. With my ribbon scissors, I made the thinnest point at the end of the ribbon to facilitate the threading. It was still too thick and too wide and became hopelessly tattered in the process. I did manage to thread it through, but needed to hack off quite a bit of the tattered ribbon, thus making my button ribbon mechanism a bit too short. It works. But it's not great. You can see in the photo below that it still looks ragged at the end. I was afraid to cut off too much too close to the knot. 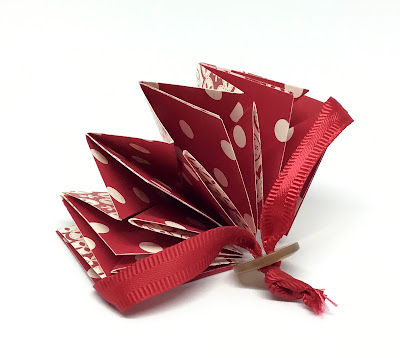 By using only a single sheet of double sided Designer Series Paper you get a pleasingly unified looking ornament. Even with the catastrophe I experienced with the ribbon, this is my favorite. 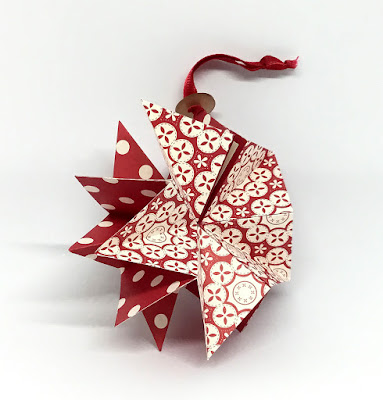 The last photo shows the second one I made with old book pages. This book's pages were pure white, not the ecru coloring you often find in old books. By the time I got to this one, I found it a little easier to make sure the print was all facing the same way. Experience = the best teacher.

The ribbon I used on this one is non-Stampin' Up!. It is a 1/2" organdy ribbon. Being that this is a much thinner ribbon than the previous ones, the extra width still worked.

Another thing that I did differently on the two book page ornaments is that for the "covers" of the stars, I didn't do any stamping. I simply used a coordinating piece of DSP. I like the looks of that. 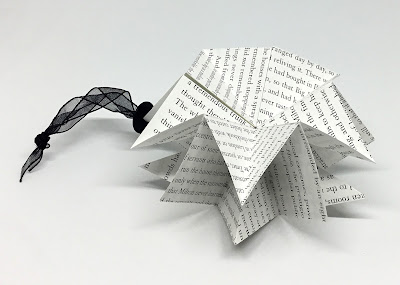 Well, I hope I've imparted a few things that will help you to avoid some of the problems I'd run into. Once again, here is the link to Dawn's terrific tutorial video.  Thanks, Dawn, for your expertise!