I love gatefold cards -- making them and the looks of them. Somehow they are just a little more fun than the traditional card hinged on the left or the top.

But they are horrendous to photograph! Especially if the photographer has only two hands. Which I do.

You see, without being held, they pop open. So it's impossible for me to capture what the card looks like completely closed. Unless, of course, I use adhesive on it to temporarily close it. Which I didn't.

My illustrator daughter, Emily Balsley, had a birthday coming up. Because she consistently produces such extraordinary work, I always take great pains with her birthday card, hoping to impress her with my work, for a change. I don't think this was one of my great successes for her. But I still like how it turned out -- as far as a birthday card goes. 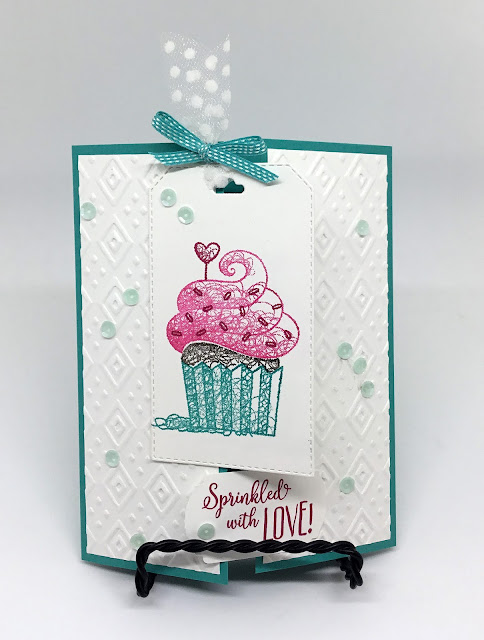 Often when I make a gatefold card, I put something on each gatefold. For example, in this card, the focal point is on the tag adhered to the left gate, while the sentiment on the punched label is adhered to the right hand gate. When doing this, it is so important to be cognizant of where you are applying your adhesive. It can only be added to the side that will not move freely. So, pay close attention!

One other thing, I usually add panels to each gate, and, like in this card, they are almost always embossed pieces. 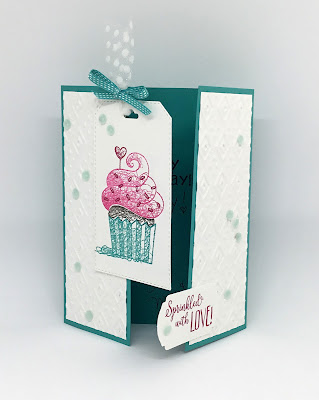 The cute cupcake is a stamp from a past Sale-A-Bration set. At the time it was released, I loved the scribbly look of the cupcake parts. I still do. That's why I thought it would be cute for my card.

To give lots of variety, the cupcake is actually made up of several stamps: the cupcake paper and shadow, the cake part (which I, of course, made chocolate!), the swirly frosting, the sprinkles, and finally, the cute heart topper.

Since the set is photopolymer, it is easy to line up the various components. 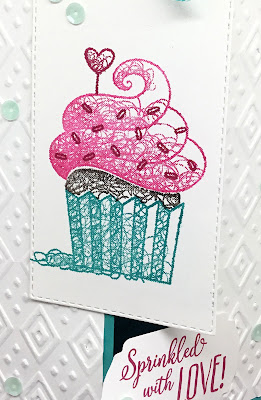 The tag on which the cupcake is stamped is one of the dies from the Bonanza Buddies Bundle on page 34 of the current Mini Catalog. That tag is the best -- I will be grabbing that die many many times in the years to come. 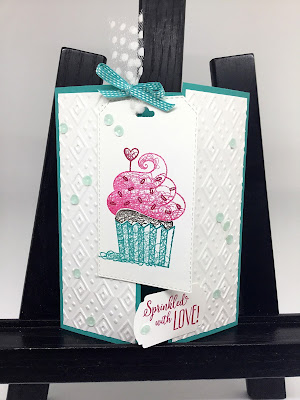 The cute punch I used for the sentiment at the bottom of the card is the Label Me Fancy Punch on page 41 of the Mini Catalog. Another product I will be getting a lot of use out of! 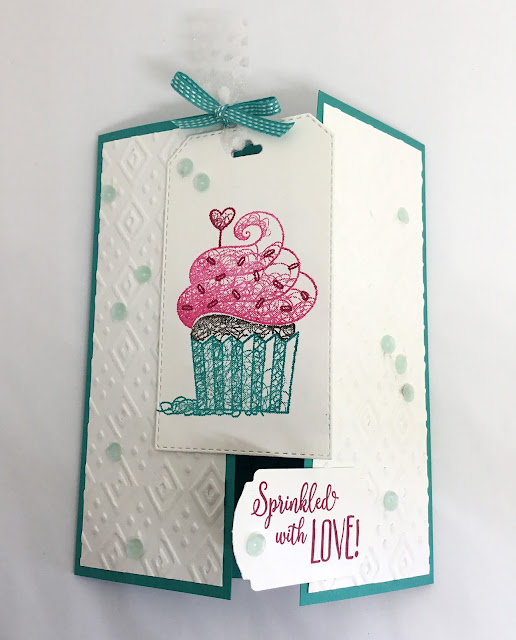 We were fortunate enough to be able to spend a portion of her birthday with Emily and her family.