Every once in awhile I remember to do something a little different with my cards. This is a booklike fold I came up with many years ago. It gives a very unique look to the opening and closing of the card. And it's so simple to do!

Notice in the photo below the little weird placement of the left lower edge of the card. That's what I'm talking about. 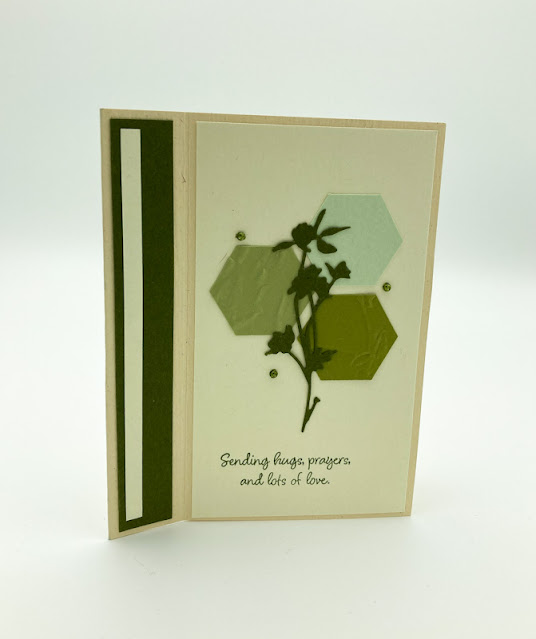 The left edge of the card is somewhat stationary in that that weird edge is glued together, leaving only the rest of the card to open. It feels a little like opening the front cover of a book.
Using three separate colors of cardstock, each of which is embossed with a different embossing folder, gives the card dimension. I know the photos don't show that up very well. But, if you look closely, you can detect the textures in the hexagons. 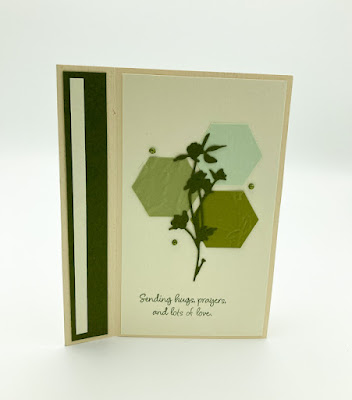 The diecut floral I used as my focal point is, unfortunately, not Stampin' Up! Since I created this card, however,  I've purchased the Meadow Dies on page 160 of the Annual Catalog, and one of these would look even better on a card such as this. 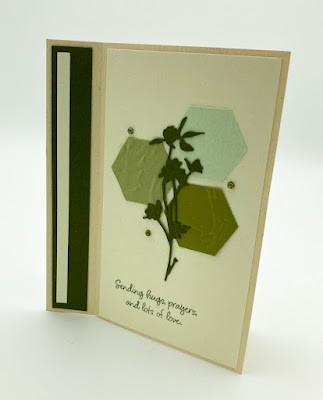 The three textured pieces were punched with the hexagon punch, which is retired now, but I bet you still have yours lying around!
The only thing I think I made a mistake on in this card was in the stamping of the sentiment. I centered it across the whole card rather than just the small portion that actually opens. When the card is closed, this isn't as noticeable, but when it's open, as in these photos, it is a glaring mistake.

Here is a tutorial to make a card similar to this one.
SUPPLIES:
Textured cream cardstock (or you could use Very Vanilla embossed with the Subtle folder)
Very Vanilla cardstock
Mossy Meadow cardstock
Soft Seafoam cardstock
Pear Pizzazz cardstock
Old Olive cardstock
Inspiring Iris (unfortunately now retired. Big BOO HOO!)
Dark Mossy Meadow Stampin' Blend for the pearls
Mossy Meadow ink
Hexagon Punch
Die cutting/embossing machine
Old World Paper Embossing Folder
Tasteful Textiles Embossing Folder
Painted Texture Embossing Folder
Diecut floral piece (or use the Meadow dies from Stampin' Up!)
Basic Pearls
INSTRUCTIONS:
Use the Simply Scored to do the folds for this card base. Using a 5 1/2" x 8 1/2" piece of textured cream cardstock, score at 4 1/4" and at 5 1/4". Fold the card in half, then again at the 1" crease, only in the opposite direction. Use a bone folder to make these firm creases.
Open the card and apply adhesive to the side of the 1" portion that will be folded inside. Press this to the inside position, rubbing it well to make sure it sticks. This gives you a different sort of a fold resembling a book somewhat.
On the outside of this portion, adhere a 3/4" x 5 1/4" strip of Mossy Meadow cardstock, followed by a 1/4" x 5" strip of Very Vanilla cardstock. I placed mine so there were even margins on the top, bottom and left sides. Place yours as you wish.
You will be building the rest of the card on a piece of Very Vanilla cardstock that measures 3" x 5 1/4".
Run a scrap of each of these colors of cardstock through your embossing machine inside three different embossing folders: Soft Seafoam, Pear Pizzaz and Old Olive. The embossing folders I used were: Old World Paper, Tasteful Textiles and Painted Texture. If you don't have these folders, any embossing folders with very prominent dimension will work.
Using a hexagon punch or die, cut one of each of the colors. Space these hexagons as you like, or according to my sample.
From Mossy Meadow cardstock, die cut any sort of foliage you have on hand. Adhere this over the hexagons.
Using a Dark Mossy Meadow Stampin' Blend, color three Basic Pearls. Adhere these as you wish.
At the bottom of the card, stamp a sentiment in Mossy Meadow ink, centering it under the flowers and hexagons.. 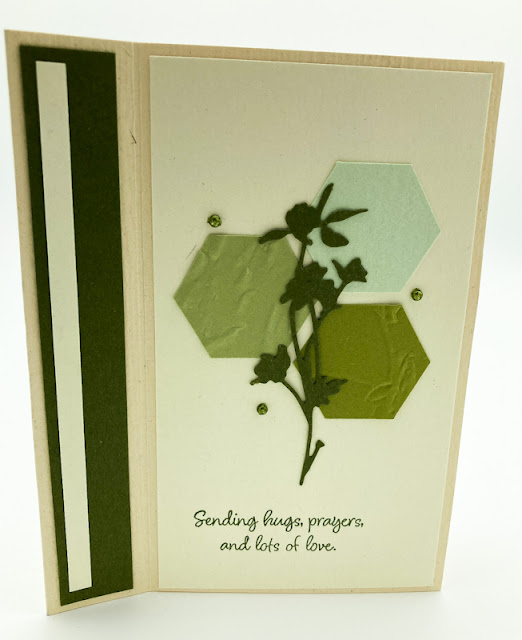