I know I've talked about all the wondrous components of the September 2021 Paper Pumpkin kit. Mostly Until recently, I have been working with the leaves and the negative spaces left by punching out the leaves.

The actual intended use of this kit was to make a field full of cute pumpkin shaped treat containers. While they are incredibly adorable, I don't really need more than a couple of these little containers. So, what to do with all the precut and scored pieces that make up the pumpkins?

Why, you cut them up and do other stuff with them, of course.

I had seen things other demonstrators and Paper Pumpkin subscribers have done with the kit. The amazing work some people come up with is, well, amazing! So, I thought I'd throw my "other options" hat into the ring.

Shown below is what I brought to reality:

Measuring 4" x 9", it sits on an easel on my sofa table.
Shown below is a closeup of the left half of the piece: 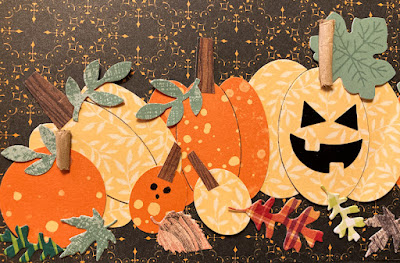 I used retired oval punches to create the shapes for the pumpkins. For the center cutie, I used the jack-o-lantern stickers that came with the kit. He's the boss. With black marker, I added the little dottie face on the guy in the front.
The stems on some of the pumpkins were pieces of the wired paper that was supposed to be twisted and added to the tops of the pumpkin containers. I just snipped off smaller pieces and, using Glue Dots, I added the stems to the tops of the larger pumpkins. The smaller pumpkins boast stems snipped from some woodgrain Designer Series Paper.
Of course, the larger leaves were from the kits and I stamped the veins with a stamp that was also included. For the smaller pumpkins, I die cut leafy branches from Soft Succulent cardstock.
I added a variety of fall leaves scattered across the bottom that I die cut from DSP to add to the "realism" of the scene.
Not sure what sort of a background I should use, I sifted through my huge stash of Designer Series Paper and discovered this Halloween one that had just enough of a design to it -- and in the right colors! -- without overwhelming or taking away from the main focus of the piece.
I wanted to make my pumpin scene more durable, so I cut a piece of chipboard to 4" x 9" and added that to the back. It worked perfectly to make it stiff and sturdy enough to stand proudly on the easel. 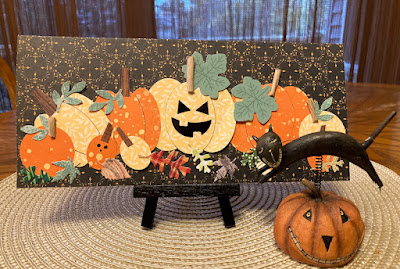 There is very little dimension to the piece, only a bit of heft from the wire and paper stems. Otherwise, everything is completely flat. 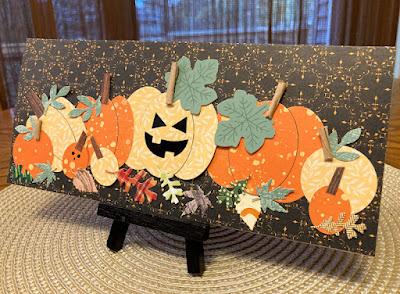 I will be sad to pack these guys away once Halloween is over. 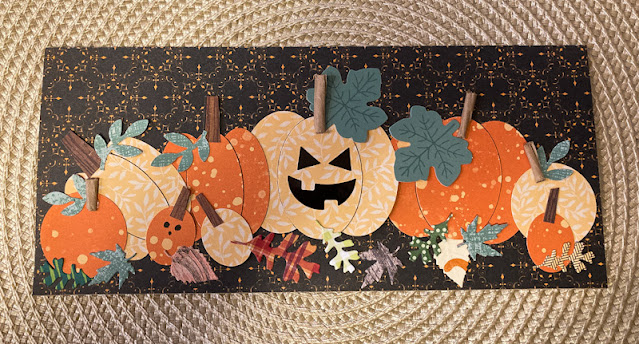 How about you? Do you decorate for Halloween? If so, did you create anything new for this year?