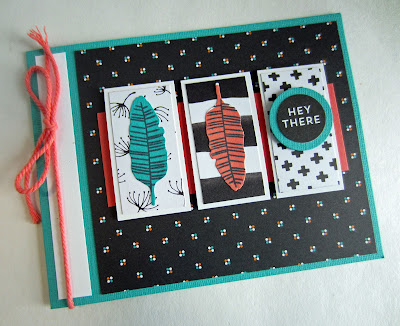 This card is something of a departure for me, isn't it? Even so, I am very happy with the looks of it.

I had noticed the darling Hello Lovely Project Life Accessory Pack on page 163 of the new catalog, and was especially excited that the matching stamp set was actually included in the kit. It was something of a "grab bag" though, in that only a smattering of the accessories are shown in the catalog, So, not knowing what they all looked like, I ordered it anyway, fully realizing that I would be able to make use of whatever was in there.

When it arrived, I was not disappointed. Sifting through all the components was truly like opening a treasure chest of marvels!

I immediately set to work, mainly because three 2" x 2" squares of black-and-white struck me especially. Initially, I planned to use the entire pieces on one card, but three 2' squares were a bit overwhelming for a single card. So, I decided to use these squares on two different cards. How? Yup. I cut each square in half, so I had six 1" x 2" cuties.

I really wanted to add a color or two to the black-and-white palette, but which?

So, I grabbed my trusty box of assorted Project Life cards that I had used numerous times in the past for random picks. Not quite randomly, I came upon a card with a black background and a mini print in white, Bermuda Bay and Calypso Coral. Perfect color combo!

One of the components included in the Accessory Pack was the little circle sticker that says "Hey There". Not being anything I would say, I decided to use it anyway as my sentiment. The rest of the card came together easily once those initial decisions were made.

The "feathers" in the other two rectangles are really leaves created with the Botanical Blooms stamp set (page 142), cut out with the Botanical Builders Framelits (page 194). By flipping them opposite each other, I was able to add a little interesting whimsy.

I love how the whole card pops with dimension: 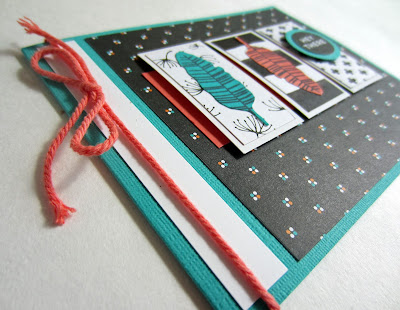 I liked the card and the layout so much that I decided to recreate it for my monthly Stamp-In workshop. However, since I did not have enough of most of the components, i.e., the "Hey There" sticker, the black-and-white pieces, and the background from the Project Life cards to have multiple people make the cards, I was forced to come up with an alternate color combo.

Have you ever ordered anything without knowing every single component in the kit? If so, have you always been pleased -- or did you feel disappointed, wondering what in the world you are going to make with these alien pieces?

I love the  unknown of opening up a treasure chest!