I guess I'm still on a little bit of a kick: using the "stained glass" die that I first introduced in THIS POST.

Since the first several cards I'd made with that die utilized traditional cardstock, I decided to give it a try with Designer Series Paper (DSP) to introduce a little more interest. Of course, since it is still July, I opted for a combination that was a bit Christmas-y in its looks -- CHRISTMAS IN JULY!

The DSP was a little tougher to work with because it is a thinner paper than the cardstock. It just gave me a bit more grief.

But, the end result had a quilted-looking stained glass appearance, so I decided my sentiment would reflect this feeling. 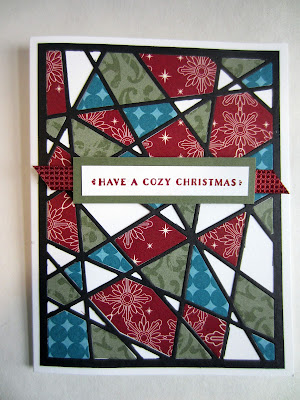 Then, to add to the cozy look, I added a bit of quilted Cherry Cobbler ribbon from a few years back underneath my sentiment. 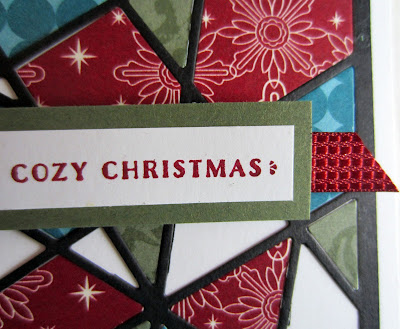 Just a side note: I don't know if this is something scientific, or what could cause this phenomenon, but I discovered that, even though the DSP pieces were created with the very same die as the black cardstock base, I found it more difficult to fit the pieces within the black grid. Most of the spaces showed a bit of the white at the edges from the white base underneath. (Notice this in the above photos.) Does anyone have any practical explanation for this?