The June 2016 Paper Pumpkin kit, Banner Surprise, is truly adorable. It contains everything you need to create six banner cards and envelopes. It's a really clever concept in card-making/banner-making!

The banner portion of the kit involves sequins inside triangular-shaped cellophane bags which you decorate, string together, and wrap around the card. The recipient then unwinds the banner to reveal the rest of the card underneath. And he/she has a cute "happy" banner to display forevermore!

I decided -- once again -- to march to that drummer inside myself for a card I created from various of the Paper Pumpkin components.

For my card, I used the striped card base, some sequins, diecut circles and several of the stamps that were included in the kit. Other than that, I departed and used materials I had on hand, including the color combination. The inks that came with the kit (TWO SPOTS!) are Tip Top Taupe and Mint Macaron. And I used Bermuda Bay and Watermelon Wonder on my card.

This is the result: 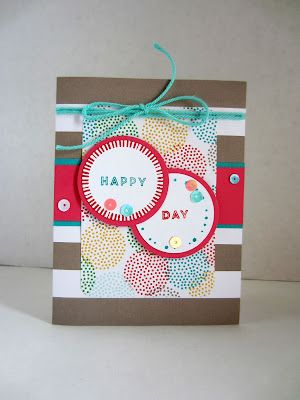 The "happy", "day" and circle and lined edges stamp inages come from the kit, as well as the white circles on which I used the stamps.

The circles are mounted atop a scrap of retired DSP that I rounded on the corners to echo the circular motion of much of the rest of the card. 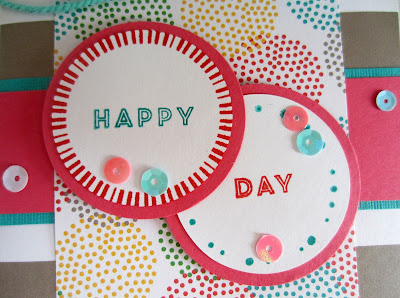 How many of you are Paper Pumpkin subscribers? Isn't it just the best day each month when that orangey/red box arrives in the mail containing all the secrets of the universe? OK. Maybe not all the secrets to the universe, but something extra-wonderful all the same! I LOVE it!