This is a very important post. Really.
You see, it is my 700th post! Can you believe it!?!

Also, I am introducing to you a wonderful stamp set, All the Good Things, which can be found on page 151 of the new Annual Catalog. I love this set. As soon as I saw it, I put it at the very top of my Wish List.

My husband and I have a history with koi. I'd been seeing other stamp companies come out with koi stamp sets, but I'm glad I waited until Stampin' Up! released one of their own, because it is exquisite.

Two of the stamps in this set come with the sentiments attached to the image. The large koi and the bonsai tree were both like that. Since I don't always want to use a sentiment with my images, I simply carefully cut off the sentiment so the sentiment and the image can be used separately. I feel that this gives me even more options with a stamp set.

At the end of this post, I will tell you a story about why I love koi so much. 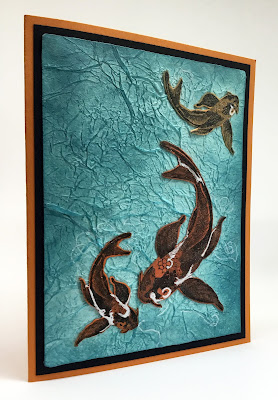 To make the watery base for my card, I crumpled up some of the pretty turquoise tissue paper that comes inside our Paper Pumpkin boxes each month. It is such a lovely shade and makes for exquisite water.

The Faux Silk technique, which is how this water environment is created, is so much fun to do and is really quick and easy. You can find a few of my other projects utilizing this technique HERE, HERE, HERE, and HERE, just to give you a few examples. I love this technique so much that it shows up in my blog posts and my Stamp-In Classes on a frequent basis. 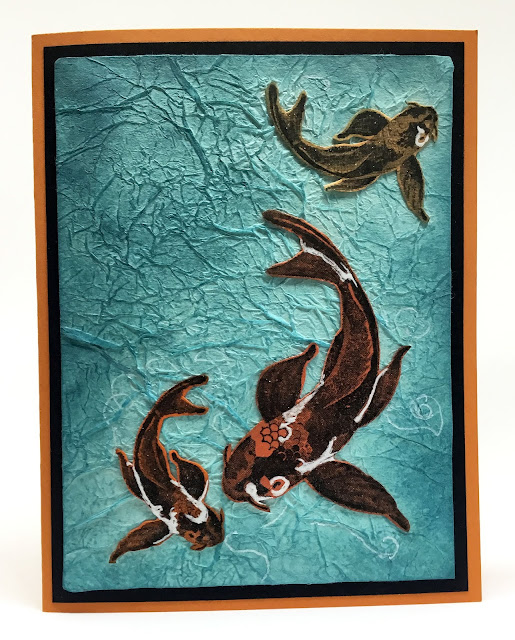 I finished up the water by adding sponging in the new ink color, Balmy Blue. I made the sponging heavier in places to add a bit of depth and "real-ness" to the water. 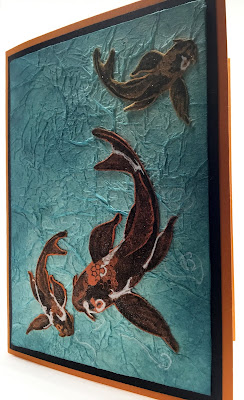 To make the koi, I stamped in Memento Tuxedo Black ink the large koi once and the smaller koi twice, on varying shades of orange-y cardstock. I then fussy cut the fish and glued them in place in the water.

If you've ever watched koi swim -- for example at a botanical garden -- they swirl around each other in such a peaceful and graceful fashion. I tried to mimic that in the placement of my koi.

Also, koi come in a huge variety of color combos of oranges, white and black. So, to add a bit more realism to my fish, I added some areas of white gel pen to them. 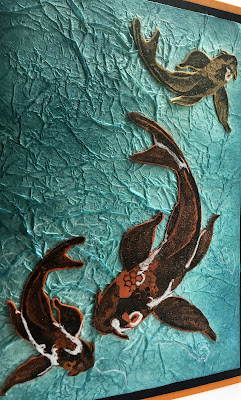 Since I meant for this card to be more of an art piece, I decided to forego a sentiment of any sort. I just wanted the tranquility of the scene to speak for itself. 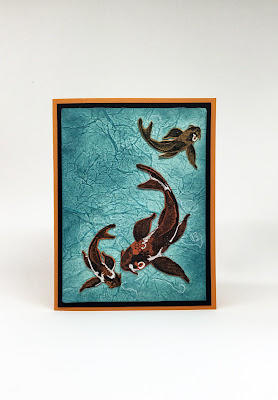 In fact, I don't plan to send this card to anyone, so I'm not even sure why I made it into a traditional card. 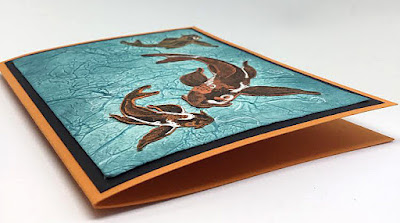 I did add some Wink of Stella to my koi, but that was terribly difficult to capture so I could share the look with you. The following photo, I suppose, does it the most justice of any of them I managed to take. 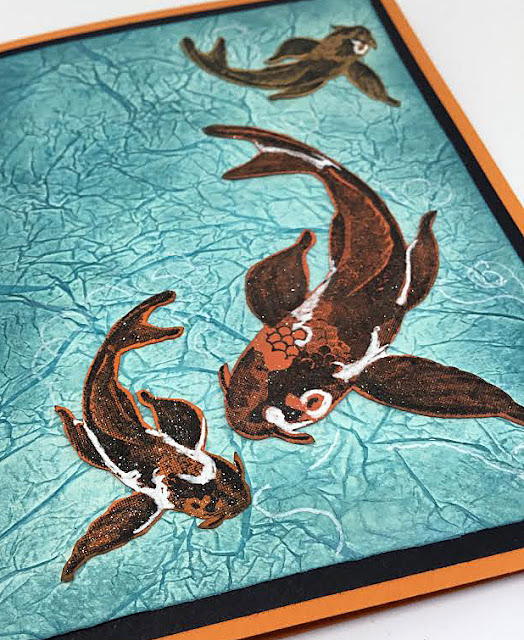 Are you ready for my koi story?

At the house we lived in until three and a half years ago, we had a gorgeous waterfall built into the downhill landscaping in the back. We had water plants, a little metal guy "fishing", rocks, plantings alongside the waterfall. To finish it off, we had three koi in the top pond. They loved their environment. It was all so beautiful.

One of the koi we purchased when it was quite small, only about five inches long. He was gorgeous, similar in coloring to the large one on my card. Each fall, we would bring him inside the house and let him live in a giant Rubbermaid container, complete with pump, heater and all the accessories to keep him healthy and happy throughout the cold winter months.

The other koi didn't last like this guy did. So, we were thrilled when, each spring, we were able to re-introduce him to his new outdoor environment. I think we did this three winters. After these three years, he measured about two feet in length. Our treasure. We'd also added two other koi to join him each spring. They never made it through the season, but our big guy always did.

One summer, when he was about three years old, there was a loud ruckus in the middle of the night. My husband went outside with a flashlight to check on what was going on. All he found were three fish heads lying in and around the water. The raccoons had had a feast. He saw them waddling away off into the woods.

We were simply heartbroken, especially at the demise of our big guy. From that time on, we put no more koi in our pond. That area was never the same again.

So, this card is my tribute to our long-gone koi. 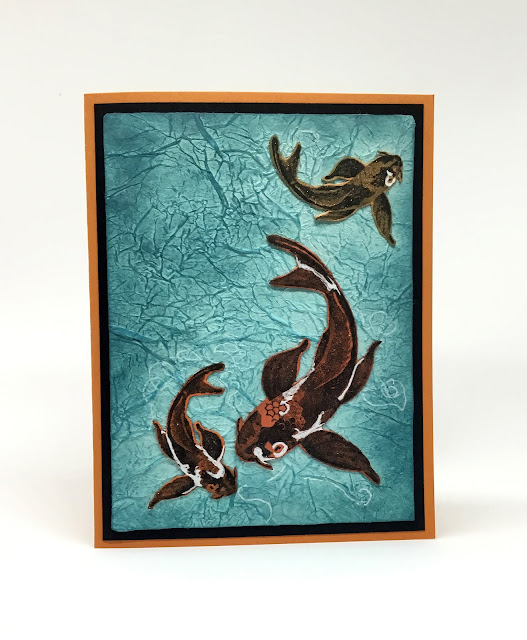 One last mention: The koi in my card actually show up as way more orange in tone than my photos reflect. So, picture them in real life as more orange than black as depicted here. Boo hoo.