I had alluded to the fact that I was making something for my grandson, Enzo's, fourth birthday besides his  dinosaur Birthday Card. While his (playable) gifts were delivered to his house in a bag and we watched him open them via FaceTime, I'd wanted to wait until we could see him in person to open this part of his gift. 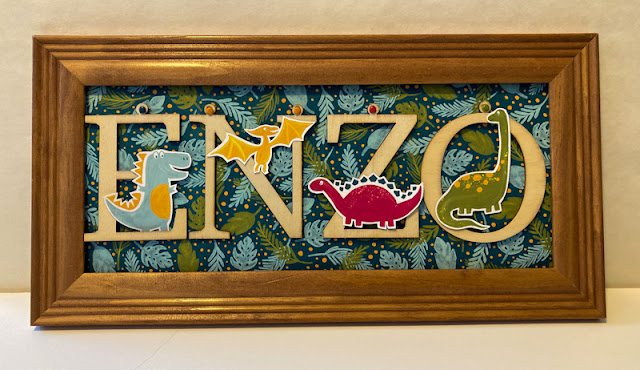 Thursday night, Enzo's mom (our daughter) had to work late, which she does once a month, so his grandpa and I had to go and pick him up from daycare, which is at our local YMCA.
I thought this might be the perfect opportunity to give it to him. All the grown ups are masked and socially distanced, and there would be a table where he could quickly unwrap it. And I could take photos of the unwrapping. (Just a note here: During the Pandemic, I literally go NOWHERE. While picking him up from daycare once a month is a real stretch to my "safe" feeling, I feel I need to grasp this opportunity to see him in person in a pretty OK environment. I feel like this integral personal connection with my little Enzo is worth the small risk now and then.)
Anyway, back to the great unveiling. It was much less spectacular (satisfying) than I'd imagined. I can be quite naive at times. I guess he thought it was going to actually be something FUN! Imagine a four-year-old boy's thoughts when he opened something TO HANG ON HIS WALL. I got the impression that he just couldn't believe it wasn't something he could play with, and started to pick at the dinosaur on the "e".
We put a stop to that while I tried to explain that it said his name and that it was supposed to be hung on the wall of his bedroom.
Completely unimpressed. 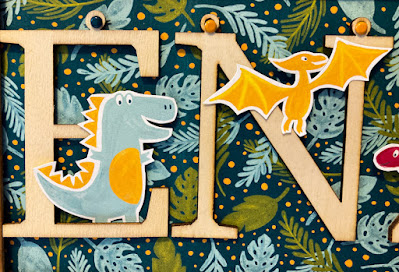 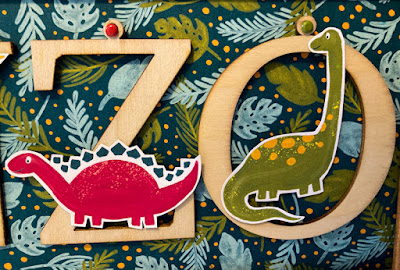 A close-up of the letters sans frame:

When I first had the brainstorm to create this, I was sure I was going to sand and repaint the frame, paint the letters in complementary colors, etc.
But when I laid everything out, I really liked the way the raw wood, the finished wood and the accompanying colors played off each other.
The wooden letter all had loops at the top as part of the letters. To make them a part of the composition, I simply inserted brads in colors that matched the dinosaur that was gracing each particular letter.
The cute prehistoric looking leaves that I used for the background was also a piece in the pack of dinosaur DSP.
Even if Enzo's not all that crazy about it, I am completely satisfied with how it turned out. 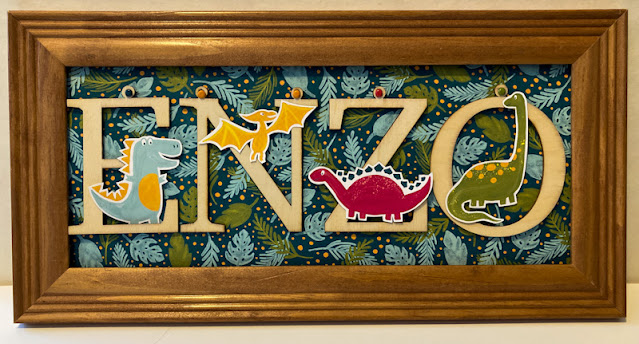 Enzo at his daycare after opening his unexciting gift: 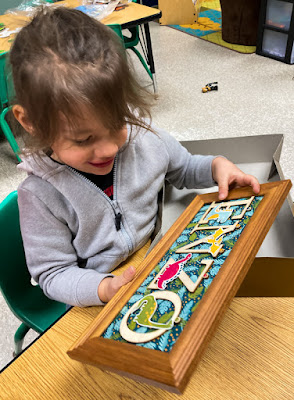 Have you ever spent loads of time making a gift for someone only to have it fall flat completely upon opening? Sniff.
Dino
Smiles.