My husband and I have two precious grandchildren, Stella, who became a teenager right after Christmas, and Enzo, who turned FOUR today!

Enzo lives only about a mile from us, but, with the pandemic, we rarely see him in person, especially now that it's winter. It simply breaks my heart. I am so grateful for FaceTime. Through that medium, I am able to even read him books and "have lunch" with him.

Since he is a huge fan of dinosaurs -- actually, what little boy doesn't love dinosaurs?? -- I went with a dinosaur theme for his birthday card. 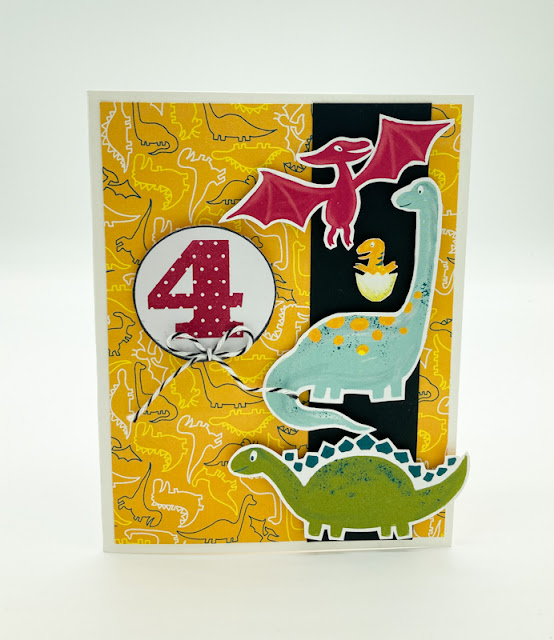 Awhile ago, I was fortunate to be able to nab the retired dinosaur Designer Series Paper at a great price on the Clearance Rack just for use with Enzo-related stuff. (If you do go to the link I provided for the Clearance Rack, it is pretty empty right now. But keep visiting -- they add lots of goodies at tremendous prices on a fairly regular basis!) 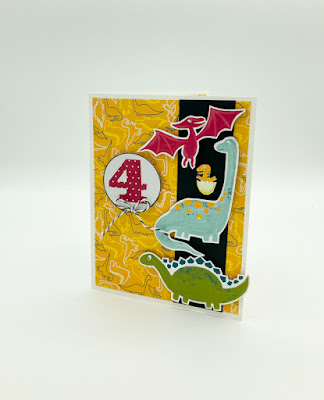 There were a few sheets of the DSP with nice-sized adorable dinosaurs. And, you'll be amazed to hear what I did with these sheets. JK. Yes, you are right: I fussy cut these dinosaurs.
Before I made this card just the other day though, I had put together another part of his gift using four of the fussy cut creatures: a framed "Enzo" for on his wall. As soon as I get a good photo of that, I will write a post about it. So, stay tuned.
When I put this card front together, I was frustrated with the black gap between the pteradactyl and the brontosaurus. I kept coming back to that blank spot, wondering how I could fix it to my satisfaction.
Flipping through the other sheets of dinosaur DSP, trying to find a solution, I came across a piece that had a little dinosaur emerging from his shell. This was an uncut sheet, but, oh well, I saw it as the perfection solution, so I fussy cut that little guy. He filled in the gap just right! 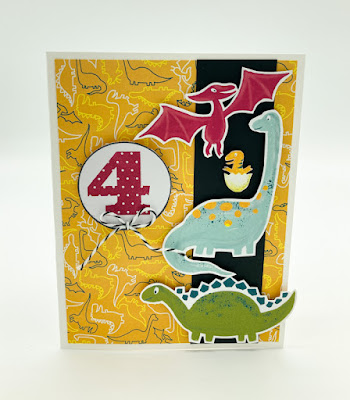 I wanted another of my fussy cut dinosaurs to be "saying" Happy Birthday to Enzo inside  the card. So I die cut the sentiment with one of the old old word bubble dies. Then I encountered another problem. I couldn't put the white words onto the white background. Even if I would have used Stampin' Dimensionals to pop it up, it pretty much got lost.
To fix this situation, I cut another chunk of the DSP from the card front (did you notice all the dinosaurs all over it?) to 4" x 5 1/4" and added that as a base for the sentiment and the dinosaur. Yay! 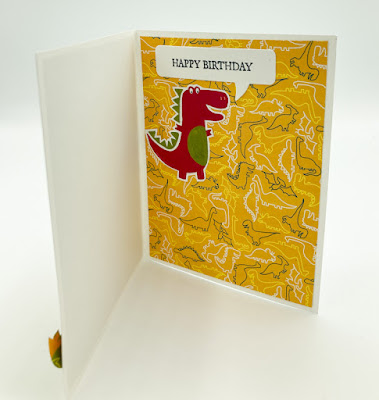 In the photo above, notice the tiny bit of the dinosaur tail that sticks beyond the edge of the card. That little bit made it just a smidge too large for a standard A2 envelope.
So . . .
I grabbed my Envelope Punch Board (I adore that thing!) and made my own envelope to fit the card and tail perfectly.
Shown below is the card sitting atop the envelope I made. If you look close enough, you will notice just below the card the little dinosaur emerging from his egg. So, you see? I ended up not letting that precious piece of DSP go to waste after just cutting out a tiny chunk so I could fussy cut the new hatchling. 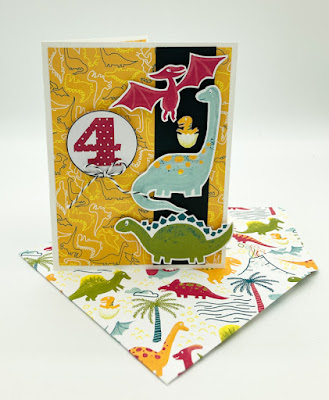 The "4" came from an ancient Paper Pumpkin kit. I stamped it in a coordinating color (Lovely Lipstick) inside a circle that was part of that old gumball machine stamp set. I then cut out the circle and added a black and white baker's twine bow to the bottom of it to give the impression of a festive balloon. 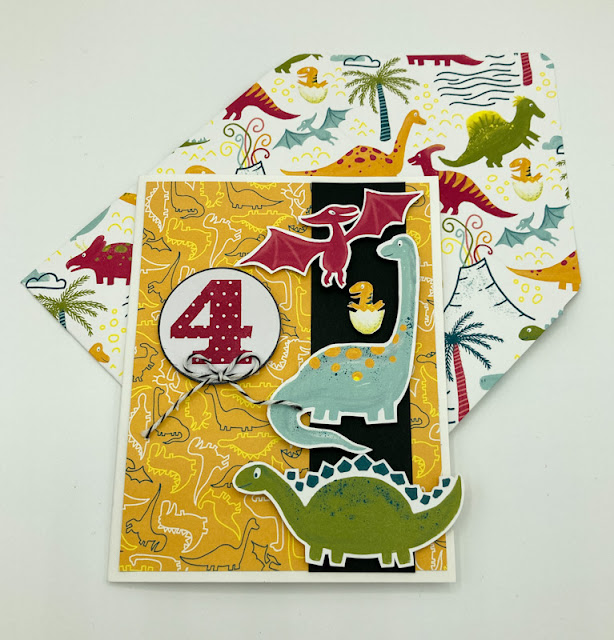 After dinner tonight, Enzo will be opening his gifts from us in "person" via FaceTime. I am anxious to see how he likes his dinosaur laden card. 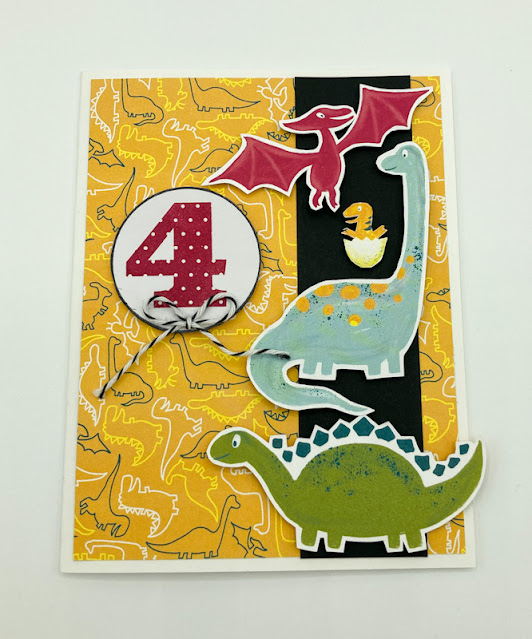 A funny little side story: When I showed this card via FaceTime to Stella's parents, her dad (who is in his early 40s) asked if he could have a dinosaur card like this for his next birthday. !! Won't he be surprised when I actually present him with one! I actually thought it was an adorable response to seeing the card.
Dinosaur
Smiles.
By the way, here is a photo of Enzo on Halloween, dressed as a lion: 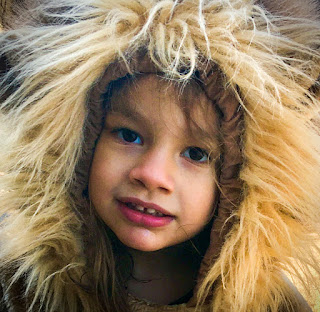