For the most part, the products used in today's card are old and retired, and I apologize for that. But, I think I have a valid reminder as to the premise for this card.

I just want to tell you about another trick you can use with DSP, aka Designer Series Paper. Many of you I'm sure are already aware of this trick, but I'm also sure there those of you who have never heard of or even thought about using DSP in this way. 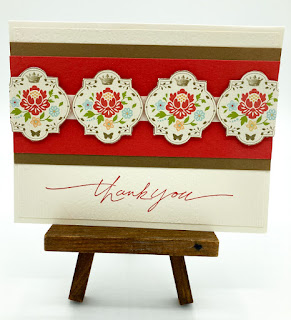 So much of the Designer Series Paper that Stampin' Up! sells has wonderful individual designs on one sheet of paper. Many times the designs are unique while other DSPs may boast designs that are repeated over and over. Often these images are good fodder for fussy cutting.
That's what I did for this card. I had a really elegant piece of DSP that featured rows of these medallions. I cut several of them to work with. Since I didn't know exactly what I was going to do with these pretty images, I ended up cutting out more than I needed. 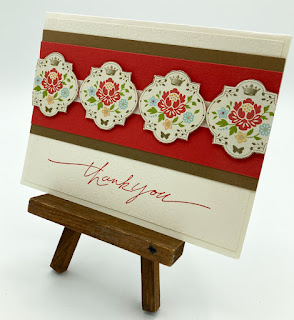 I chose four of the images for this card. Even spaced tightly together, they measured more than the 5 1/2" of my card front.
To remedy that, I cut a strip of Poppy Parade cardstock that measured 2" x 5 1/2". Before adding my medallions, I centered a 1/2" strip of Very Vanilla cardstock onto the Poppy Parade. Then I carefully lined up my images, butting them together, and letting bits of Very Vanilla show between them. I adhered the pieces with Stampin' Dimensionals. Once they were in place, I simply snipped the two end ones even with the cardstock on which they were mounted.
So the rest of the card had a little interest too, I ran a 4" x 5 1/4" piece of Very Vanilla cardstock through my embossing machine inside the Subtle embossing folder.
I think this makes for a cheerful, fairly elegant card. 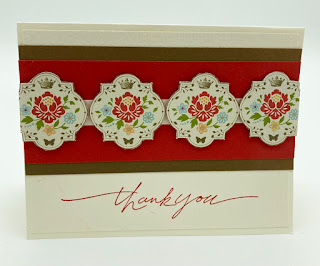 Be honest now, have you ever cut apart a piece of DSP and used the separated images on a card? Are there any other ways you have used fussy cut pieces?
Fussy
Smiles.