When I posted my cards I'd made from the April 2021 Paper Pumpkin kit in this post, I mentioned that I'd made full size cards from each of the four designs and promised I would post them in the future. Well, the future has arrived!

For each of these cards, I mounted the cute shaped cards upon a traditional A2 size card. The difference, besides being a normal sized card, is that I did something different on the paper directly behind the shape on each of the cards.

In the first card, shown below, I had something of a lightbulb moment. I decided to create a background of modified kiwi fruits. I did that by using the circle die that came in the kit, then added kiwi seeds in black ink with the three dot stamp that was also included. For the second card, I made a really wonderful discovery by accident. I had decided to put a border of watermelons around the edge of the back paper. Like a nincompoop, I mounted the watermelon stamp upside down on the clear block and went about stamping. After the first image, I discovered my mistake. But, seriously, it was a good one! I continued to stamp these pink blobs all around the edge. When I finished, I just turned the stamp right side up and stamped over the solid watermelons the details in black ink. No coloring needed! 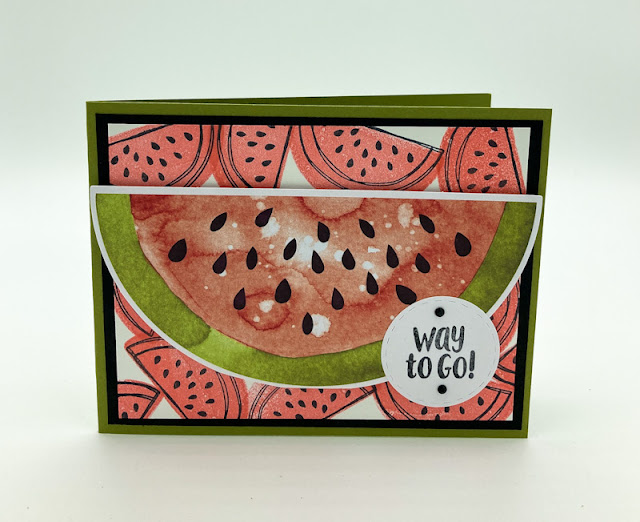 The background of this card didn't turn out perfectly, but I like it anyway. I searched through my Designer Series Papers, looking for a black and white design. I discovered this stripe that I thought would work well. However, when I chose the Stampin' Blends colors to match as closely as possible the colors in the rainbow, there were, of course, five colors. Alternating colors on the stripes didn't work too well. You see, I'd color in the first five blank stripes, then skip a white one and resume the color sequence again. Unfortunately, about halfway down, the white stripe I needed to skip was a WIDE white stripe, which looked truly awful.
The happy accident came when I placed the rainbow onto the card. The width of the rainbow nicely covered up that wide white stripe, making it turn out perfectly, neatly disguising the over large white stripe..
Before you judge me for my coloring -- really, I am a terrific Stampin' Blends colorer, if I may say so myself -- I attempted to recreate the imperfect look of the rainbow. Not a complete success, I realize, but it will suffice. 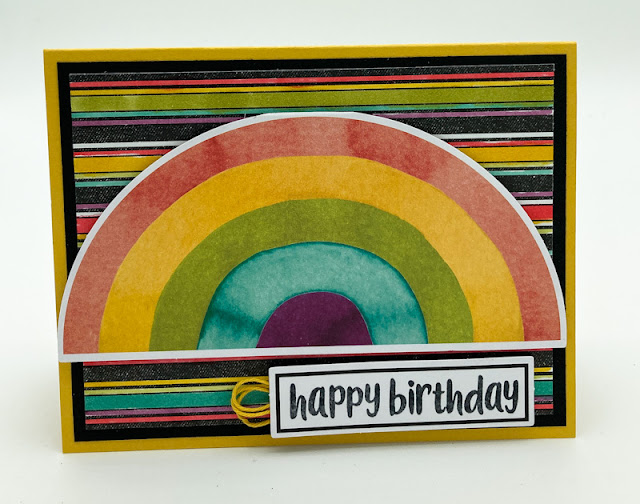 I had fun with this last card especially. Once again, trying to replicate the look of the popcicle coloring, I took a piece of Vellum Cardstock, and with Stampin' Blends, sort of scribbled in stripes. I am actually quite pleased with how this one turned out. 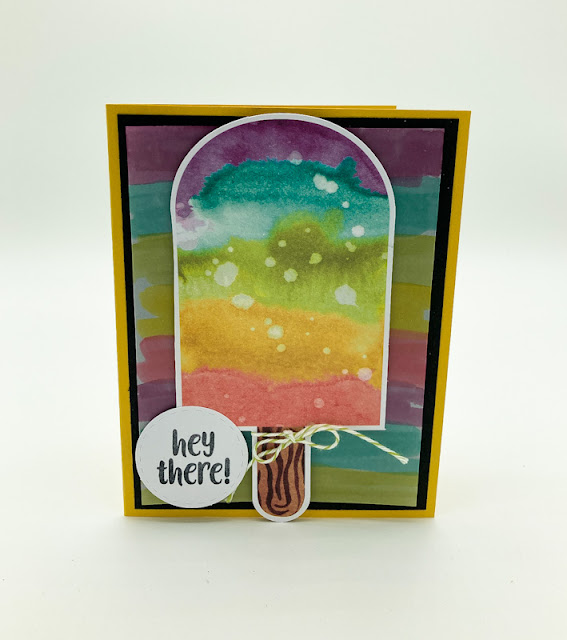 Now, how about you? Do ever do anything like this? Experimenting with different looks for backgrounds? And maybe come across a happy accident or two?
Are you a Paper Pumpkin subscriber?
Summery
Smiles.