Have you all seen the current Mini Catalog, Handmade For You? It is in effect through January 4. (If you don't have a catalog of your own, let me know and I'll send you one.)

One of the things that really struck me as soon as I saw it in the catalog was the pack of 6X6 Designer Series Paper, Plaid Tidings, on page 57. Every single sheet of the two-sided DSP is a different plaid design, suitable for use throughout the year. One luscious plaid after another. I've always been partial to plaids, so I immediately fell hard for this pack. 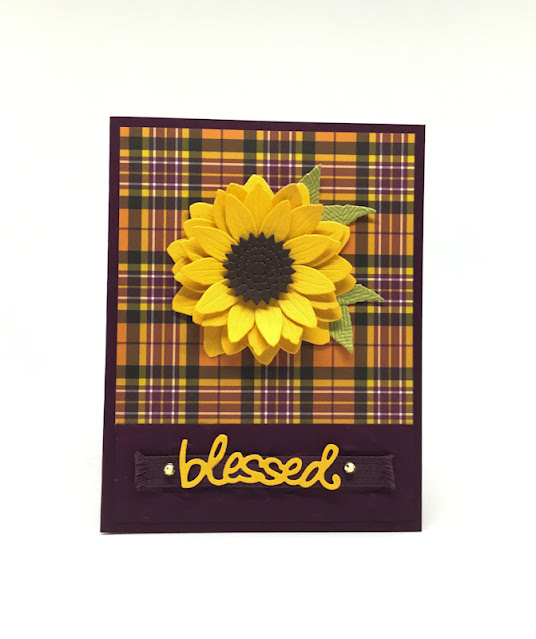 As an already established sunflower lover, when I saw this non-Stampin' Up! sunflower die set, I just had to have it. Once I got it in my greedy little hands, however, I was stunned at all the teeny tiny pieces that needed to be die cut and put together so it resembles a sunflower. The flower and leaves consist of 49, yes, that is FORTY-NINE, pieces!
About a week ago, I put together my first sunflower (I haven't shown you that card yet), and, even though it was painstaking to create, I had a hankering the other day to make another one. Crazy? Yes, but in a good way. 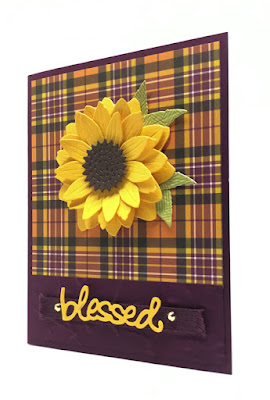 Once the sunflower is complete, it has such a delightful show of dimension. The flower itself measures only about 2 1/2" in diameter, so it's a perfect size for on a card.
I knew I wanted to place it against a DSP background, so started searching through all my retired 6X6 sized sheets. I came across one that I thought looked well with it.
But then . . .
Yes! The new plaids! Flipping through the plaid DSP designs, I came across this one, which had a pleasingly fall look to it. So I decided to go with it.
Originally I cut the DSP to 4" x 5 1/4". Looking in the catalog, I perused the colors that are used in these pieces of DSP, and discovered that the purplish lines through my piece was Blackberry Bliss! So I cut a card base from that cardstock. However, when I laid the larger piece of DSP onto the card base, yuk. It did not thrill me whatsoever.
That's when I made the change. I cut down the DSP to a square of 4" x 4". Nice. But, what to do with the rest of the card base? I often like to make a square card, so at that point, it would have been an option for me to create a 4 1/4" x 4 1/4" card. Nah.
I decided to use the remaining 1 1/4" by adding another piece of the Blackberry Bliss cardstock. But that looked woefully plain.
To give it more character of its own, I embossed it with my trusty new favorite embossing folder, Old World Paper (page 185 in the Annual Catalog). Spectacular! 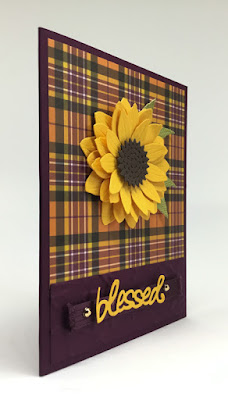 Shown below is what I ended up doing with the Blackberry Bliss area to finish off the card. I die cut the word "blessed" from the same cardstock I used in the sunflower and added it to a strip of Blackberry Bliss ribbon that I frayed on the ends. I used a couple Dimensionals to add the ribbon/sentiment to the lower portion of the card.
It seemed a little forlorn, so I added a couple of the Gilded Gems (Page 157, Annual Catalog). 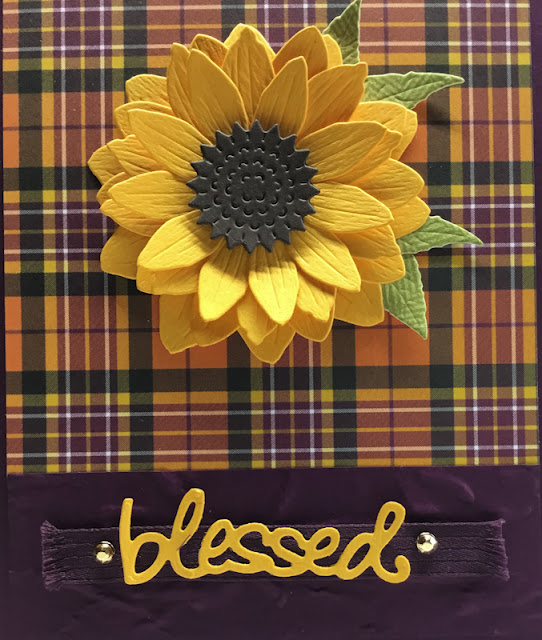 In the following photo, I was TRYING to show the texture of the embossing. 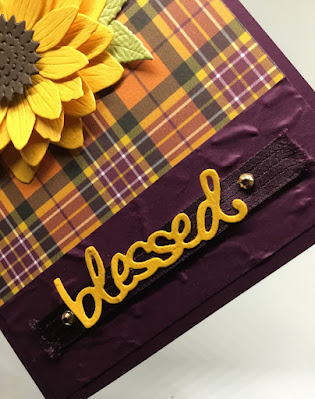 C'mon now, you have to admit this is the most fallish card ever! Right? 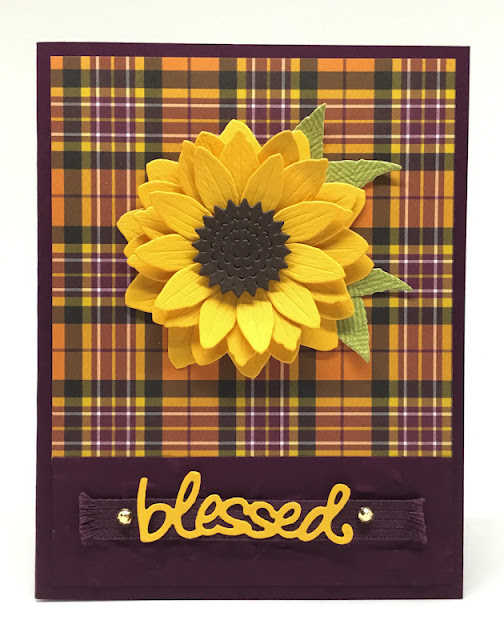 Even though we are all going through such tough and uncertain times, I hope we can manage to remember that we are blessed, at least in some way(s). Keep looking up, as my friend keeps telling me.
Autumn
Smiles.