In early June, the Annual Catalog began its year long life. Of course, as always, the catalog is filled to the brim with goodness.

One of the items that caught my eye was the lovely 6X6 Designer Series Paper called Flowers for Every Season (page 148). The selection of papers in the pack is literally usable year round.

Another product that came into existence at the same time as the Annual Catalog is a brochure called Make Beautiful Things, created with beginning stampers in mind. Even though it's meant for beginners, I always find something wonderful for myself in these brochures (this is the second year Stampin' Up! has issued one of these beginner pamphlets).

A stamp set on page 5 of the pamphlet caught my eye. It's called Four Season Floral. I thought it would be great to match up the flowers from this stamp set with some of the lovely papers from the Flowers for Every Season DSP pack. So I proceeded to do so. This is the second such card I'm showing you. The first, Daisy Smile, can be seen here.

Since there are still a few days left of official summer, I thought today I would feature a card featuring lots of sunny colors. 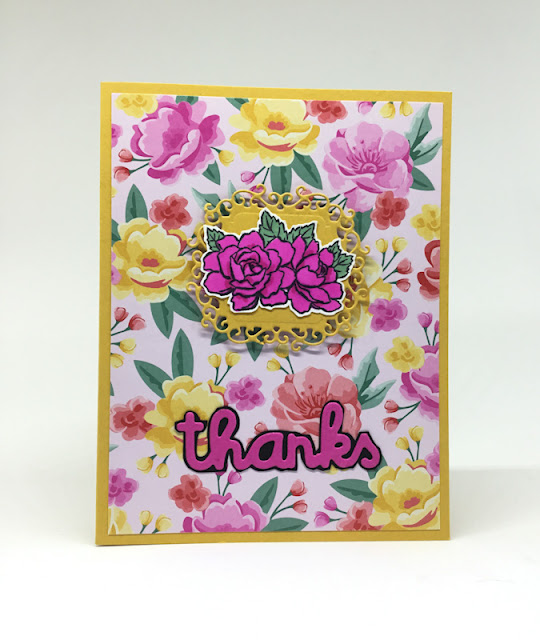 After stamping the dual flowers, I colored them in with Stampin' Blends, Light and Dark Magenta Madness and Light Just Jade, two of the new In Colors.
Once I fussy cut the flowers, I die cut one of the Ornate Frames (page 182) from Bumble Bee cardstock (another new In Color) on which to mount the flowers. I popped the combination up onto the DSP with a couple of Stampin' Dimensionals.
Using Magenta Madness cardstock, I die cut the word "thanks". Setting that against the busy DSP, it got completely lost. Oh no! Where did my sentiment go?
To alleviate that situation, I adhered the word to a piece of black cardstock. Then I went about fussy cutting so the bright pink word had a slight mat of black around it, which helped it show up so much better against the busyness of the DSP.
At first, I was hesitant to use black because there was no black elsewhere with the exception of the black stamping for the coloring of the flowers. I felt this was enough reason to be able to introduce a little more black into the composition. A close up of the details: 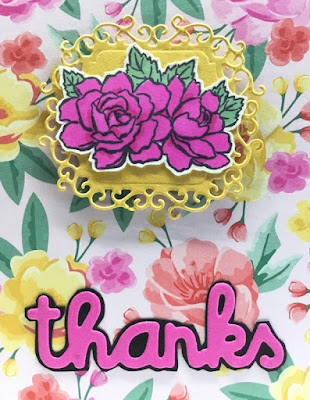 To finish the summer cheeriness of the card, I mounted it on a base of Bumble Bee cardstock. I will show the remaining two cards in the near future. 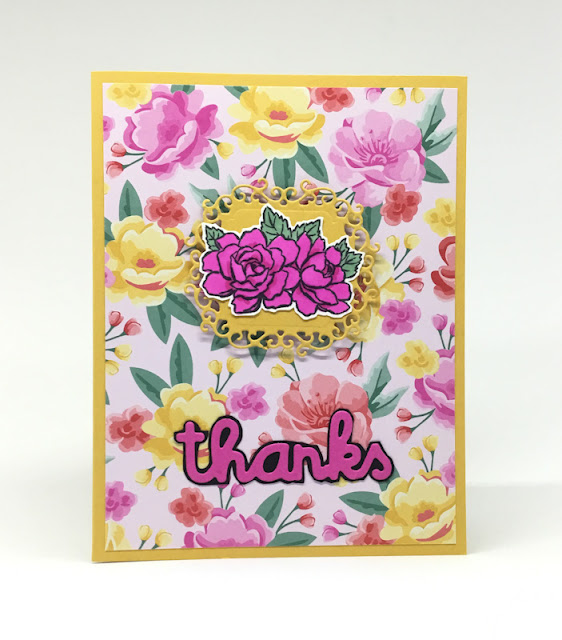