First of all, I feel I must explain why I named this blog post as I did. Scraposaurus Rex. You see, my little three year old grandson, Enzo, loves dinosaurs, and this project lets you use up LOTS of scraps. Thus, in Enzo's honor, Scraposaurus Rex.
I just cannot throw away even the tiniest scrap of Designer Series Paper. I even hang onto pieces as small as a strip or a 1 1/2" square. They are just so luscious, I can't toss any of it.
Recently I saw a card that was posted on the Simon Says site and I was immediately drawn to it. Similar to the one I ended up creating, theirs isn't quite as crazy as mine in that the larger circles on their card are of solid colored cardstock, not DSP as in mine.
I seriously did worry about combining such a plethora of designs, none of them meant to work together. I must admit that I am thrilled though with the ragtag look of my card. And it makes me so happy to look at it. 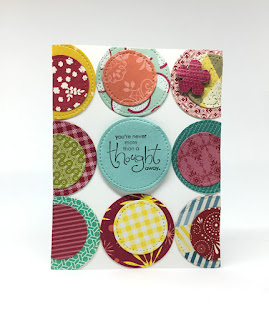 After gluing the circle sets in place onto the card base, you end up with something that looks like in the photo below. You need to snip off the circles that hang beyond the borders of the card.
I suppose you could leave it like this. But, you'd have to make an envelope to fit since it wouldn't be a standard size card. It would be sort of nifty. I guess. 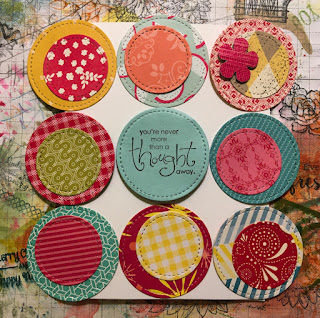 After the circles are trimmed to the edges, you get a nice, neat look. With the popped up flower and the central circle, it provides a modest amount of dimension. But, not so much that it would require additional postage. 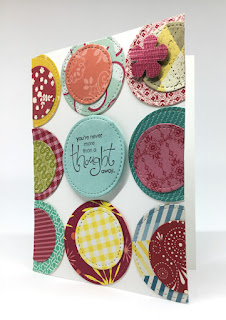 Do you love the way these completely disparate designs work together? 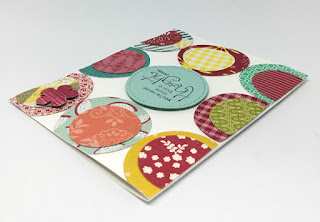 I do think that normal people would simply toss the extra edges of the circle pairs that went beyond the sides of the card. I really do. However, looking down at my table at these little slices of cuteness, I couldn't bear to end their lives.
Deciding then and there to retain these little cuties, I put them to work in another card: 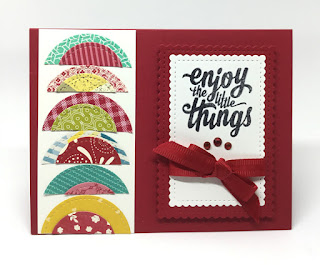 Although, just by looking at it, you could probably figure out how to make a card such as this one, following you will find a tutorial on how to go about it.

creasing it well with a bone folder.

You will be using this as your canvas for the entire card.

Using the two middle sizes of circles from the Stitched Shapes die set,

cut eight circles of each from an assortment of Designer Series Paper scraps.

They don’t need to match at all.

Try to cut no two circles of the same DSP.

The goal of this card is to make it look like a silly quilt and to use up those little scraps of DSP that you could not bear to throw away.

and cut a circle with the larger of the two circle dies.

Not matching anything, pair up the sets of circles, one small, one large.

Glue them together, not centering any of the small circles.

Stamp a sentiment in the center solid circle.

Adhere this circle to the approximate center of the card

with a couple of Dimensionals.

Working from the center circle,

add in the other pairs so they approximately line up.

You can see from my sample that I didn’t do a great job of this. No matter.

Once all the circles are adhered to the card base,

use paper snips to trim all the excess even with the edges of the card.

Most normal people would throw these cut-off pieces away. Not me!

See my other card sample for how I rescued them.

With the Small Bloom Punch, punch out a flower from another random DSP scrap.

Add that to one of the double circles with a Dimensional. 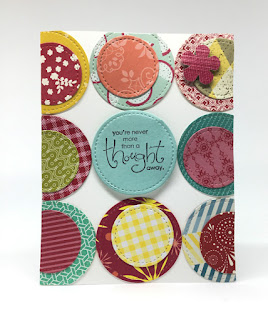 Smiling up at you while holding two dinosaur skeletons is my little grandson, Enzo. 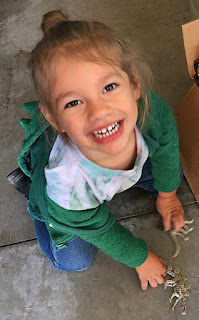